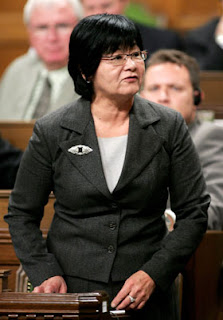 A 7 million dollar program is cut because the Minister doesn't like it spending less than a million on advocacy. Even though her department mandarins recommend funding Kairos, she cuts the entire program. Claiming it did not meet CIDA objectives, pardon me, it was CIDA that recommended they continue funding Kairos as they had for forty years. Whose objectives did Kairos offend why the Harper Government (c) (tm) (r) of course.

And then she says it was her idea....falling on her sword for the PMO.

While at the same time she cut their funding Jason Kenney delivers a speech in Jerusalem, denouncing Kairos as anti-Semitic. Because they support the call for Israel to end its occupation of Palestine, funny that it is a UN Resolution.

And it was all her idea, yeah sure, this is the same Minister who cut funding to Women's Groups the Conservatives opposed.

Instead of funding advocacy groups, Oda said taxpayers' dollars should go toward programs that " help women in their daily lives, to help them in their communities."

She is the PMO hatchet cutting funding to groups that the PMO considers liberal or left wing which they term; 'advocacy', That they do it is to be expected, that they cover it up with the claim that the groups don't meet their funding objectives is a weasel way out. That the Minister claims it was her idea, is also a denial that this is Harper Government (c) (tm) (r) policy.

Ms. Oda said Friday she personally rejected the Kairos application because it did not fit with CIDA’s objectives. While the application for funding contained some positive elements, there were also some aspects that were of concern.

“For example, over $880,000 was to be used for advocacy, training, media strategies and campaign activities here in Canada,” Ms. Oda told the committee. “I believe this is not the best way to spend public funds intended to help those living in poverty in developing countries.”

Around the same time, Kenney made a speech in Jerusalem, calling Kairos anti-Semitic and hailing the government’s funding cut to the group as evidence of the Conservative battle against anti-Semitism.

KAIROS’ officials also testified on Friday, saying they have asked for an apology from Kenney for calling the group anti-Semitic. Oda, for her part, said Kenney didn’t talk to her about his speech or the funding decision and she learned of his remarks through the media.

In another letter to be published here tomorrow, a writer “commends” the government for cutting funding to KAIROS because it allegedly gets money “funneled” to it by Status of Women Canada which “promotes feminist ideologies, pro-abortion agendas and ‘reproductive rights’.”

Another salvo from the anti-abortion community won’t detract from the seriousness of what Oda has done. It does, however, recall the Tory government’s insistence on tying Harper’s noteworthy policy on overseas aid to women and children to prohibition of birth control.

Modern birth control methods will serve to greatly reduce sexually transmitted diseases racing through parts of the underdeveloped world. Soaring birth rates in those areas threaten to destabilize the world’s ability to feed, house and care for billions living in poverty. This does not seem to matter to Harper.

If KAIROS’s sin in his eyes, and Oda’s, is having worked to educate the Third World to life-saving help, it does not deserve to be cut off by Ottawa.

Prime Minister Stephen Harper has been accused of systematically undermining women in this country by stripping their advocacy groups of tens of millions of dollars and targeting those critical of his government’s anti-abortion stance on the world stage.

In the past two weeks, the federal government has ended funding to 14 women’s groups, including a non-governmental agency that was funded by the Canadian International Development Agency (CIDA) for more than 30 years.

Which, in a way, applies to Kairos, a gaggle of mainstream Canadian Churches, and Liberals, NDP and Bloc Quebecois politicians, outraged over the Tory decision to zap the group’s $7 million annual gift from Canadian taxpayers.

They are outraged that the Tories have also looked in a mirror and have seen Kairos for what it is - a radical, pro- Palestinian movement with a decidedly far- left political agenda.

Like any group, of course, they are entitled to believe whatever they want. But they aren’t entitled to do it with public money and the government has every right to say so. During the 1970s, 80s and 90s, successive federal governments routinely dispatched multi-million dollar cheques to prop up radical left-wing advocacy groups purporting to represent the interests of Canadian women.

United Church moderator Mardi Tindal, for example, wrote to International Cooperation Minister Bev Oda last week saying she was “dismayed” by the government’s decision, adding that Kairos “has also had its good name attacked - again with no credible explanation.”

Oh, there is an explanation. Kairos was outraged in late 2009 when Immigration Minister Jason Kenney accused it of playing a leadership role in a movement to boycott, divest and sanction Israel for its supposed human rights abuses against Palestinians.

Kairos flatly denies this - and its denials are echoed by its many apologists. The facts, alas, belie their claims of innocence. Just as the United Church general council meeting where Tindal was elected moderator in 2009 also criticized Israel - but not its’ apparently peace-loving neighbors - and encouraged its congregations to “study, discern and pray” and undertake anti-Israeli initiatives, “which may include economic boycotts” (against Israel), Kairos has consistently been critical of Israel while conveniently turning a blind eye to the murderous actions of its neighboring enemies.

Kairos, to cite just one example of its anti-Israeli penchant, openly promotes a campaign against Canadian companies “doing business in Israel or the Occupied Palestinian Territories (that are contributing directly or indirectly to violence, occupation or other human rights abuses in the region) ..

Posted by EUGENE PLAWIUK at 6:06 PM

I've just downloaded iStripper, so I can watch the sexiest virtual strippers on my taskbar.