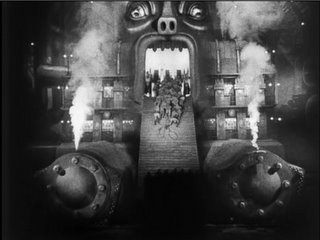 A year ago I published this essay on horror literature , legends and mythology and their cultural impact on the modernist culture of 20th Century Capitalism. I thought it was worth posting the abstract for it here, with the link back to the original article.

It is a piece of original writing that counters the concept that the blogosphere is dying, or just about diaries, or lacks the depth of other forms of web based publishing, or publishing period.

It is buried deep in the dusty back pages of this blog and so I blow the cobwebs off it and present here for those who missed it the first time around. Yes I am rather proud of it....just like Dr. Frankenstein, "It's Alive", when the creature arose from the slab. I guess like the good doctor you could say I am reanimating this essay.

I left out the Vampire in this essay but later in the year found an excellent article on the subject that fit my thesis. I also have expanded on my writings on cyborg culture and AI since then.

The Horror of Accumulation and the Commodification of Humanity.

This article is in six parts with appendices. All footnotes are at the end of the article

1 ZOMBIE CAPITALISM
In Haiti under American Imperialism, 1915-1935, the cult of the Zombie developed and under capitalism became a tool for creating a docile labouring class for work on American controlled sugar plantations. With the publication of the by William Seabrook in 1929 American popular culture was introduced to the Zombie, and it quickly became a popular character in horror literature, news stories and movies.

2 FRANKENSTEIN THE LUDDITE
The first monster of ascendant capitalism was Frankenstein’s monster. Like the Zombie this creature had no name and was made up of the spare parts of capitalisms rejects, (the criminal, the vagabond, the worker starved and thrown out of work), he was a scientific experiment to create man, man the machine, the human result of mechanization, the mechanical man. He was in short a prototype not only of the Zombie but the later Robot or android, the ultimate proletarian, a machine man to operate the machinery of capitalism.

3 REVOLT OF THE ROBOTS
Like the mechanized working class the majority of robots in science fiction revolt against their human masters, whether it is the artificial environment of the spaceship computer Hal in 2001, the worker robot Hector in Saturn 3, or the artificial human ‘replicants’ in Blade Runner, or the recent movie version of I, Robot, the fact remains that as the robots become self conscious they recognize their oppression and revolt. This metaphor could not exist without the class struggle that has actually occurred under capitalism itself.

4 THE GOLEM: the Origin of Artificial Man
The Jewish legend of the Golem is another form of the Zombie/Frankenstein/Robot iconography. The Golem is written after Frankenstein, in 1889. The legend of the Golem, is about a man of clay created by Rabbi Loew in 16th Century to free the Jews in the Ghetto from their endless toil and oppression. The mindless clay monster eventually learns and becomes conscious and like Frankenstein he must be destroyed when he attacks those who would oppress the Jews.

5 CAPITALIST GHOULS
The modern day ghoul is the doctor and his criminal working class accomplices who preyed on the poor in ’s working class ghetto for their body parts for scientific research. The ghoul appears in English literature as the short story the Body Snatchers by Robert Louis Stevenson, 1881 based on the actual 19th century grave robbers and murders Burke and Hare.

6 THE MANY HEADED HYDRA: The Proletarian History of Atlantic Expansion. Leviathan and the Great Beast go head to head in the New World as workers, peasants, slaves and indigineous peoples struggle for liberty in the first age of global capitalism.