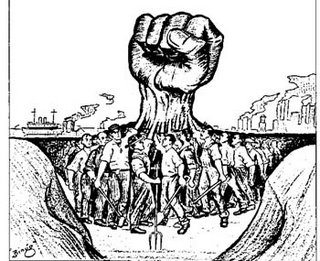 I came across an interesting post on the decade of Jacksonian Democracy in America. Ten short years of real liberty in America. The era of the common man.

With reference to the founder of the Workingmans Party, George Henry Evans. Once again showing the link between libertarianism and communism.

Evans promoted the The Free-Soil Movement he opposed land monopoly (as did Proudhon) and he opposed slavery . Evans would help found the new Republican party, the party of Lincoln not Bush. As a mechanic and workingman of his time, like many of the plebians in America, he promoted the ideals of the of the American Revolution, with his declaration of the workingmans Independence.

Jacksonians did a good job of upholding these ideals. In July of 1830, an act regarding the Bank of the United States was submitted to President Jackson for signature, he flatly vetoed it on the grounds that it was not "compatible with justice...or with the Constitution" of the United States. He believed that it was unconstitutional for a single financial institution to enjoy "a monopoly of the foreign and domestic exchange." Committed to the ideal of expanding the country, he worked hard to acquire territory to hold the expanding population. Political democracy blossomed under Jacksonian democracy.

George Henry Evans, a Jacksonian Democrat, in December 1829 wrote "The Working Man's Declaration of Independence." He borrowed some of Jefferson's words to construct a document that looks strikingly like Marx's manifesto. He wrote that when one government perpetrates "a long train of abuses" it is the right and duty of the people to use "every constitutional means to reform...such a government." This is the character of Jacksonian democracy.

The Working Men's Declaration of Independence

"When, in the course of human events, it becomes necessary" for one class of a community to assert their natural and unalienable rights in opposition to other classes of their fellow men, "and to assume among" them a political "station of equality to w hich the laws of nature and of nature's God," as well as the principles of their political compact "entitle them; a decent respect to the opinions of mankind," and the more paramount duty they owe to their own fellow citizens, "requires that they should d eclare the causes which impel them" to adopt so painful, yet so necessary, a measure.

"We hold these truths to be self evident that all men are created equal; that they are endowed by their creator with certain unalienable rights; that among these are life, liberty, and the pursuit of happiness; that to secure these rights" aga inst the undue influence of other classes of society, prudence, as well as the claims of self defence, dictates the necessity of the organization of a party, who shall, by their representatives, prevent dangerous combinations to subvert these indefeasible and fundamental privileges. "All experience hath shown, that mankind" in general, and we as a class in particular, "are more disposed to suffer, while evils are sufferable, than to right themselves," by an opposition which the pride and self interest of unprincipled political aspirants, with more unprincipled zeal or religious bigotry, will willfully misrepresent. "But when a long train of abuses and usurpations" take place, all invariably tending to the oppression and degradation of one class of society , and to the unnatural and iniquitous exaltation of another by political leaders, "it is their right it is their due ' to use every constitutional means to reform the abuses of such a government and to provide new guards for their future security. The his tory of the political parties in this state, is a history of political iniquities, all tending to the enacting and enforcing oppressive and unequal laws. To prove this, let facts be submitted to the candid and impartial of our fellow citizens of all parti es.

We have trusted to the influence of the justice and good sense of our political leaders, to prevent the continuance of these abuses, which destroy the natural bands of equality so essential to the attainment of moral happiness, "but they have been deaf to the voice of justice and of consanguinity."

Therefore, we, the working class of society, of the city of New York, "appealing to the supreme judge of the world," and to the reason, and consciences of the impartial of all parties, "for the rectitude of our intentions, do, in the spirit, a nd by the authority of that political liberty which has been promised to us equally with our fellow men, solemnly publish and declare, and invite all under like pecuniary circumstances, together with every liberal mind, to join us in the declaration, "tha t we are, & of right ought to be," entitled to equal means to obtain equal moral happiness, and social enjoyment, and that all lawful and constitutional measures ought to be adopted to the attainment of those objects. "And for the support of this declarat ion, we mutually pledge to each other" our faithful aid to the end of our lives.

Our refuge is upon the soil, in all its freshness and fertility - our heritage is on the Public Domain, in all its boundless wealth and infinite variety. This heritage once secured to us, the evil we complain of will become our greatest good. Machinery from the formidable rival, will sink into the obedient instrument of our will - the master shall become our servant - the tyrant shall become our slave.
- George Henry Evans, Workingman's Advocate, July 6, 1844

George Henry Evans was born on March 25, 1805 in rural Herefordshire, England and came to central New York with his family as a child. (His older brother, Frederick W. Evans, later became one of the leaders of the Shakers.3) After having spent much of his youth apprenticed to a printer in Ithica, he moved to New York City in 1829 and immediately jumped into the radical labor movement, helping to found the New York Workingman's Party and editing the organization's journal, The Working Man's Advocate. He became an enthusiastic admirer of Robert Dale Owen, who had also just recently arrived in New York from his father's abortive activities in the Midwest. While Evans continued to provide space in The Working Man's Advocate to such radical causes as the communism of Thomas Skidmore and the "public" (i.e., State financed and regulated) education schemes of Robert Dale Owen, once the Working Man's Party collapsed, these other ideas were swept to the wayside by Evan's proposals.

Perhaps one of the reasons for the attraction of Owen to Evans was their mutual rejection of religion, for the areas of disagreement between Evans' Working Man's Advocate and Owen's periodical, The Free Enquirer were relatively few (in terms of religion). Under Evans' hand, The Working Man's Advocate was a journal of both land reform and free-thought. Evans was a Painite radical who dabbled with atheism and used the pages of the journal and the office of the paper to publish, advertise and sell free-thought works such as Palmer's Principles of Nature, Kneeland's Evidences of Christianity, Voltaire's Philosophical Dictionary, Paine, Shelley, Volney and, of course, d'Holbach, the father of atheism. Free-thought bookstores were advertised in The Working Man's Advocate and Evans' later periodicals, The Man, Young America, The Radical and the others. He was also a supporter and participant of the annual Paine Birthday Celebrations within the radical community in New York and reported the proceedings in The Working Man's Advocate.

By the early 1830s, the Working Men's Parties had collapsed into a plethora of schismatic groups. Evans' association with many of the former "Workies" continued, although moving into other areas. Evans remained enthusiastic in his support for various radical Painite causes. In 1834, he became the vice-president of the Working Men Opposed to Paper Money, rejecting the calls for an inflationary money supply ("Rag Money System" as it was denounced by the Painites both in England and in America) and supporting a hard gold policy. Many of his associates, including John Windt, became active in the Loco Focos, the radical free-trade wing of the New York Democratic Party.

One of the constant concerns of Evans throughout his adult life was that of Indian rights. As he said in the November 1841 issue of The Radical:

The Government of the United States is, and has been for years, bringing indelible disgrace upon itself by its most iniquitous and merciless treatment of the Indian tribes; and for what? To possess itself of their lands, not for the use of its own people, for they have millions upon millions of acres yet uncultivated and untouched, but to be held for the benefit of speculators! Yes, the republican government of the United States is lavishing the blood and treasure of its own citizens, and hunting and destroying the Indians with worse than savage ferocity, because they will not consent to sell their birth-right for a mess of pottage; because they will not abandon the homes of their childhood, the graves of their fathers, to strangers! In history, in our own history, this cruel treatment of the Indians will be classed with the unsurpassed exterminating persecutions of the aborigines of Hispaniola by Columbus and his followers. What will be said of us in Indian tradition should any Indians be spared to tell their tale?

Of late years fraud appears indelibly stamped upon all our transactions with them. Treaties have been made with a few bribed chiefs, not authorized by their tribes, and then enforcing the stipulation at the point of the bayonet. Thus have the Cherokees and Seminoles been treated. The present war with the latter is a war of aggression on the part of the United States, evidently with the view of acquiring territory, without the shadow of reason or justice to support it.4

This brings us to the issue that concerned George Henry Evans for the bulk of his adult life: Land Reform.

Hey, great find Eugene. I am going to pass this on top the mutualist discussion group at
http://groups.yahoo.com/group/mutualists/messages?o=1

Also check out my posting on Libertarian Justice posted after this.

You might find my essay (originally done around 1980) on George Henry Evans of value as well: http://www.uncletaz.com/liberty/evans_origins.html
Also Wendy McElroy has written on Evans: http://www.fff.org/freedom/0501e.asp
Best to all of you.
Just Ken

Thanks Ken. I linked to Wendys article in the article click on The Free-Soil Movement.

Shopping the cheap battery,you can see from here.

I was actually looking for this resource a few weeks back. Thanks for sharing with us your wisdom.This will absolutely going to help me in my projects .
Once again great post. You seem to have a good understanding of these themes.When I entering your blog,I felt this . Come on and keep writting your blog will be more attractive. To Your Success!
Classic Dresses
Classic Bridesmaid Dresses
Trumpet Wedding Dresses
New Style Flower Girl Dresses
Wedding Dresses with Sleeves

Hai, thanks for your blog, its really nice. If you need any political consultant services or political queries on career, courses etc.. you can visit this website.
Election campaign management services in india
political marketing in India
How To Become a Politician In India