The Neanderthals, an extinct species of archaic humans, trekked nearly 2,000 miles to some 59,000 years ago across Europe to their final destination - a cave in Siberia deep in the forest, at the foothills of the towering Altai Mountains. Now, an analysis of the tools found that the tools to have been formed in the same way as those used by Neanderthals in eastern Europe, rather than those commonly found elsewhere in Siberia.

The striking similarity has led researchers to conclude that there were two separate long-distance migrations of Neanderthals into Siberia, some 40,000 years apart.

The bombshell discovery reinforces the unfolding view within academic circles that Neanderthals were a sophisticated people who were skilled survivors and capable of such long journeys.

The Chagyrskaya Cave, first excavated in 2007, has since become an epicentre for pre-historic finds.

Some 90,000 stone artefacts and the remains of plants and animals have been recovered from the site, as well as 74 Neanderthal fossils. 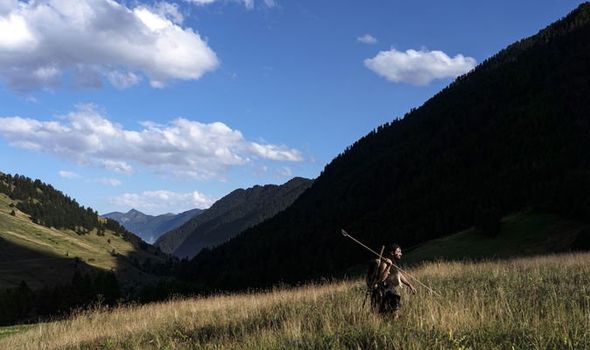 The discovery rewrites our understanding of Neanderthals (Image: GETTY) 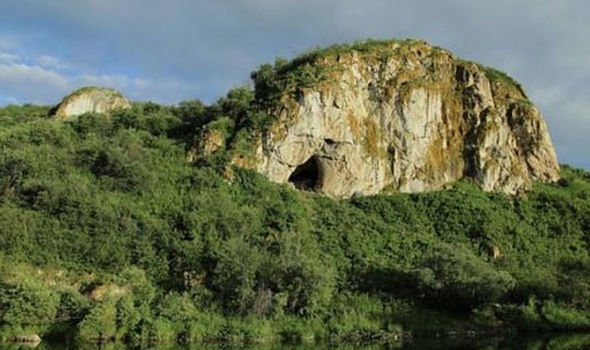 
The Russian Academy of Sciences carried out analyses on more than 3,000 stone tools from the cave, Kseniya Kolobova among a team of experts who secularise in Neanderthal material culture.

The team used a method of time stamping known as optical dating, which measures the last time that individual grains of quartz were exposed to sunlight, to determine when different sediments, artefacts and fossils were deposited from the cave.

The method has proved especially useful to geologists and archaeologists alike in pinpointing when such an event in history occurred.

The recovered plant and animals remains also enabled researchers to recreate the environmental conditions of that time,

JUST IN: Archaeology news: Vesuvius victims were BAKED to death 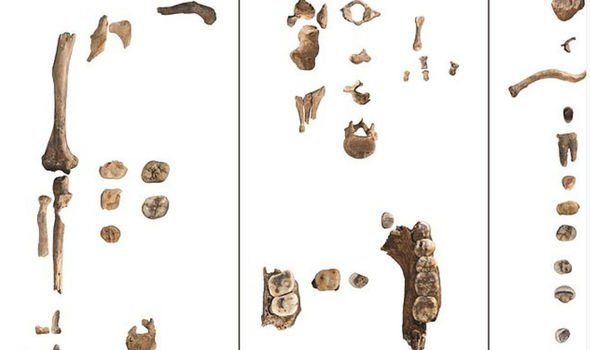 An overview of the remains found in Chagyrskaya Cave (Image: Kolobova et al)

From this, a cold and dry climate was realised, one that Neanderthals would have used to their advantage to hunt bison and horses to survive.

And, separator to this discovery was how closely the tools - which date back to 59,000 to 49,000 years ago - resemble the so-called Micoquian tools used by Neanderthals in Eastern Europe, over 1,000 miles to the west of the cave.

Named after the La Micoque dig site in Dordogne, southwestern France, the Micoque was a period in history dating back 130,000 to 60,000 years ago which was characterised by distinctly asymmetrical two-faced tools.

Writing in the Conversation, Dr Kolobova wrote: “Their distinctive stone tools are dead ringers for those found thousands of kilometres away in eastern and central Europe.” 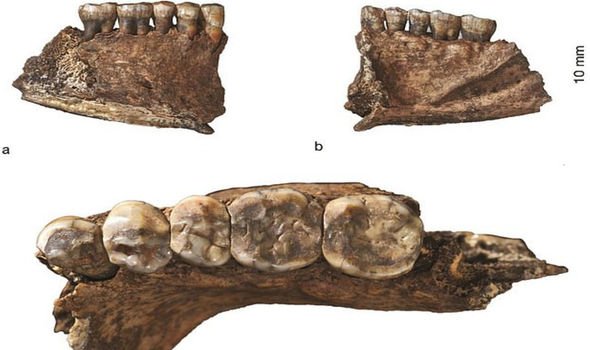 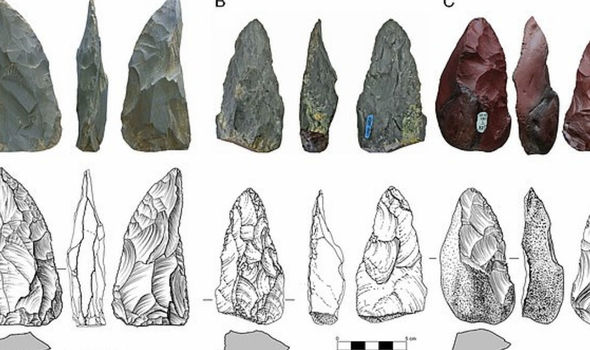 Some of the items recovered from the cave (Image: Kolobova et al)

Meanwhile, in stark contrast, the team note that the tools found in the nearby Denison Cave are not Micoquian, despite it being home to Neanderthals more than 10,000 years ago.

The tools found there instead resemble the so-called Levallois style, in which flakes were cut off tools off of a pre-prepared stone core.

The researchers wrote: “The presence of Micoquian artefacts at Chagyrskaya Cave suggests at least two separate dispersals of Neanderthals into southern Siberia.

“Sites such as Denisova Cave were occupied by Neanderthals who entered the region before 100,000 years ago, while the Chagyrskaya Neanderthals arrived later.” 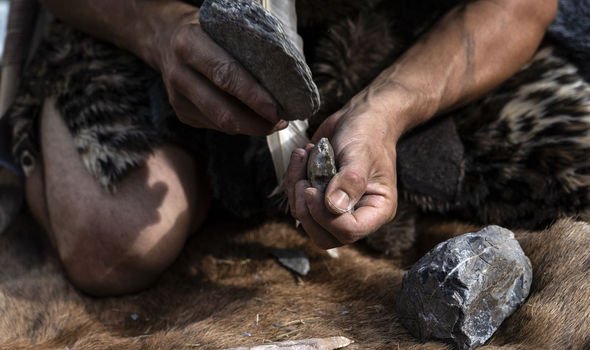 DNA analysis of the Neanderthal fossils provided and supported a link between the Chagyrskaya Cave population and their counterparts in eastern Europe.

The team explained: “The Chagyrskaya Neanderthal [shares] closer affinities with several European Neanderthals than with a Neanderthal from Denisova Cave.

“When the Chagyrskaya toolmakers (or their ancestors) left their Neanderthal homeland in eastern Europe for central Asia around 60,000 years ago, they could have headed north and east around the land-locked Caspian Sea.”

This, they explained, “was much reduced in size under the prevailing cold and arid conditions”. 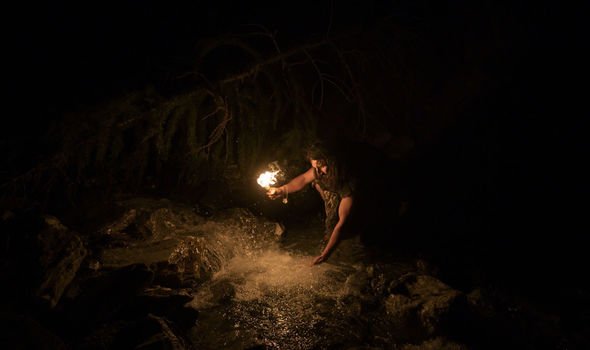 Neanderthals are now thought to have been much more intelligent than what was first thought (Image: GETTY)

The significance, then, is overwhelming, as the researchers noted the lack of any evidence for long-distance trekking and transcontinental journeys over thousands of miles from Neanderthals.

On this, the study added that it “highlights the value of stone tools as culturally informative markers of ancient population movements.

“Our discoveries reinforce the emerging view of Neanderthals as creative and intelligent people who were skilled survivors.

“If this was the case, it makes their extinction across Eurasia even more mysterious. Did modern humans deal the fatal blow? The enigma endures, for now."
Posted by EUGENE PLAWIUK at 12:46 PM No comments: Links to this post

Email ThisBlogThis!Share to TwitterShare to FacebookShare to Pinterest
French firefighters faced off against riot police in Paris on Tuesday.


The riot police deployed water cannons, smoke grenades and erected large metal barriers to block off the fire service protestors.
The riot police continue to use crowd control grenades despite controversies stemming from their use against both the Yellow Vest protestors and the pension reform protesters.
The video footage shows the moment riot police hit protestors with their batons.
Some firefighters can be seen stumbling and attempting to get back up at their feet while pushing the riot police back.
Macron’s riot squad break into violent clash with protesting firefighters - VIDEO (Image: Bryan MacDonald ) 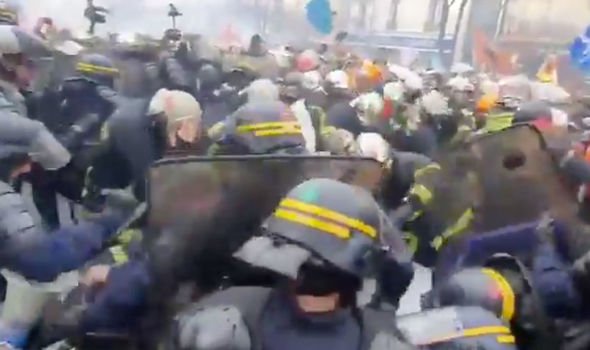 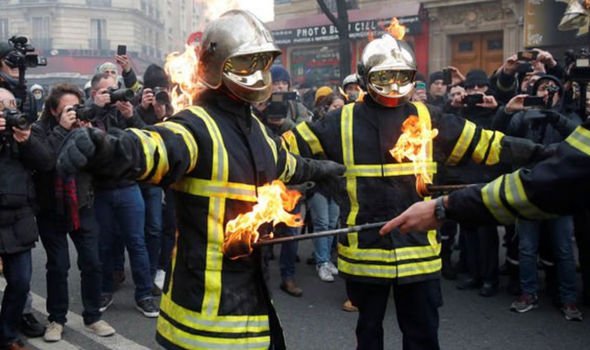 At one point during the protest, multiple firefighters symbolically set themselves on fire. (Image: Reuters)
Professional firefighters represent just 16 percent of the 247,000 firefighters in France, with the remainder comprising volunteers and military personnel.
Tuesday’s march was the second national demonstration by the professional firefighter's unions in less than four months; the strike movement began back in June 2019 after proposed reforms to the national pension scheme were announced. 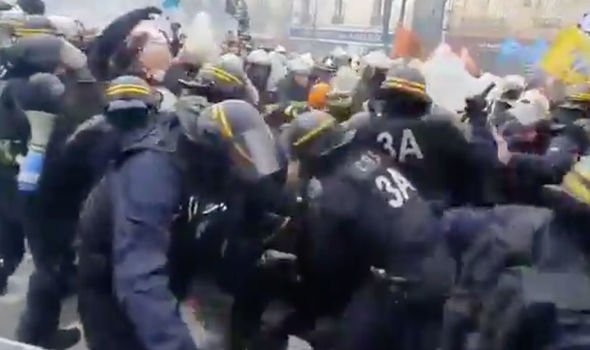 France: Clashes in Paris as firefighters and police face off

Tension erupted as police forces and firefighters clashed on a day of mass protests in Paris, on Tuesday.

Scuffles broke out when police reportedly fired water cannons at firefighters who had rallied in the French capital to demand better working conditions and a pay raise. Footage filmed on Tuesday shows police beating the firefighters with sticks and using what it appeared to be pepper spray.

Firefighters are demanding an increase from 19 per cent to 25 per cent in their 'risk pay', as they claim staff shortages have been making their job more difficult.

A previous protest held by French firefighters in October was marred by clashes with police in Paris and in the southern city of Dijon.

French riot police clashed with uniformed firefighters at protests in Paris on Tuesday, in extraordinary scenes where police used batons and shields against crowds of angry fire officers in helmets.
Thousands of firefighters held a demonstration in the French capital, as part of long-running protest movement asking for better pay and conditions, including an increase in their hazard bonus which has not changed since 1990.
Some firefighters set their uniforms alight as a symbolic gesture before colleagues put out the fires. But as a group of fire officers attempted to lead their demonstration into a sidestreet, riot officers pushed them back. Teargas was fired and scuffles broke out.

Posted by EUGENE PLAWIUK at 11:10 AM No comments: Links to this post

MICHELLE OBAMA has just won a Grammy award for her memoir ‘Becoming' and now she has been named as Joe Biden's choice for Vice President if he is elected President.


Many have speculated whether Michelle might run for President or any office (Image: GETTY)

Michelle Obama shock: Trump warned of stunning victory by ex-FLOTUS ahead of 2020 election

MICHELLE OBAMA could win the 2020 presidential election in the US, the professor who predicted Donald Trump’s stunning victory in 2016 has warned.

By CLIVE HAMMOND
But election expert Allan Lichtman has warned Michelle would have a better chance of winning this year’s election as opposed to her Democratic rivals.
According to the Daily Caller, he said: “She comes out extraordinarily well with the Democratic rank and file.
“She has the charismatic potential. She has the pizzazz the [current] candidates don’t have. [Independent Vermont Sen.]
“Bernie Sanders has pizzazz, but he’s like Trump.
Michelle Obama news: Ex-FLOTUS would make stunning victory expert warns Trump fans (Image: GETTY)
Michelle and Barack with the Trumps (Image: GETTY)
“He appeals only to a narrow slice of the electorate.
“He’s not a Franklin Delano Roosevelt or a Ronald Reagan.”
But he added: “There are rules that would prevent her from being nominated at the convention, but rules can be changed.
“I think it’s a long shot, but I don’t think it’s out of the realm of possibility.”
JUST IN: Michelle Obama voted ‘most admired woman” of 2019 by Americans 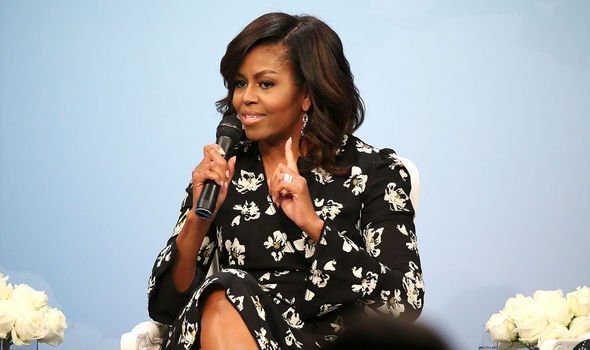 Michelle Obama: Fans want the ex-FLOTUS to run (Image: GETTY)
It comes after Michelle left Instagram fans begging for her to run for President after she dropped an adorable update on the social media platform.
The ex-FLOTUS saw hundreds of Instagram users ask her to consider a tilt at next year’s election.
Many hope she will consider becoming the Democrat nominee and run against current US President Donald Trump.
The post that sparked the wave of outpouring shared the Obamas Christmas card.
The post was shared thousands of times.
Among the fans asking for her to consider running, one wrote: “Please come back.
“The planet has not been the same since your sweet family was in the spotlight, and we could see your faces so frequently.
"We cried when you left the White House."
Michelle Obama: Ex-FLOTUS with husband Barack (Image: GETTY)
Posted by EUGENE PLAWIUK at 10:35 AM No comments: Links to this post