WE COULD HAVE HAD EV's A CENTURY AGO!A "Detroit Electric" all-electric car makes a promotional tour through the Cascade Mountains from "Seattle to Mt. Rainier," circa 1919. (Library of Congress photo) 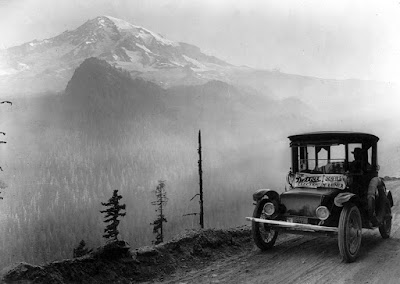 WHY WERE THEY NOT POPULAR,
WELL TESLA AND EDISON ELECTRIC COMPANIES WERE NOT AS POWERFUL
AS ROCKEFELLER AND STANDARD OIL SO FORD USED A GAS DRIVEN
INTERNAL COMBUSTION ENGINE

https://www.oldoregonphotos.com/a-detroit-electric-at-mount-rainier-1919.html
Only the full view is available for sale. ... The Detroit Electric was manufactured from 1907 to 1936, though most of its sales were in the teens. Advertised with an 80 mile range, its record (with special batteries and driving very slowly) was 241 ... Here we see a dealer's car making a promotional trip from Seattle to Mt. Rainier.