The Carbuncle of Class War 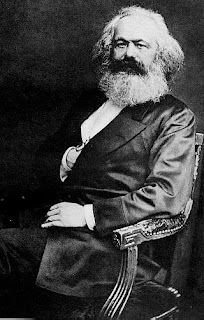 This has been a well known fact for years Marx suffered from boils. Now some dweeb is explaining his theories of alienation experienced by the working class under capitalism as the result of his condition.

Karl Marx suffered from a skin disease that can cause severe psychological effects such as self-loathing and alienation, according to a British dermatologist.

The father of communism’s life and attitudes were shaped by hidradenitis suppurativa, said Sam Shuster in the British Journal of Dermatology. One of its symptoms is alienation – a concept that Marx, a martyr to boils and carbuncles, put into words as he wrote Das Kapital.

“In addition to reducing his ability to work, which contributed to his depressing poverty, hidradenitis greatly reduced his self-esteem. This explains his self-loathing and alienation, a response reflected by the alienation Marx developed in his writing.”

This is reductum ad absurdum that results from a shallow attempt to deconstruct Marx. And it isn't even new. It is pop psychology of the right, an attempt to dismiss ideas by dissing the man. Not unlike Aileen Kelly's attack on Bakunin.

The fact is that Marx's poverty exasperated his disease. If anything his suffering poverty, like that of his fellow European working class immigrants to England, placed him within the class. And his skin condition had nothing to do with his revolutionary ideas, he had evolved those long before his skin condition became a problem.

Karl Marx did his best writing on deadline.

Commissioned by the Communist League in mid-1847 to write a "profession of faith," Marx and Engels procrastinated, traveled, experimented with form and might never have written the manifesto of the Communist Party if not for a sternly worded letter from the league ordering them to deliver the document by February 1, 1848.

A few all-nighters later, Marx produced a stirring document that by now has been read by tens of millions of people. Far fewer realize that regular deadline commentary provided Marx with the closest thing he ever had to actual employment. From 1852 to 1862 he was a regular London correspondent for the New York Tribune. All told, Marx contributed almost 500 columns to the Tribune (about a quarter of which were actually written by Engels). Marx's newspaper writing takes up nearly seven volumes of the fifty-volume Collected Works of Marx and Engels--more than Capital and indeed more than any of Marx's works published in book form.

The Tribune was in some ways a logical place for Marx's journalism. The paper was founded in 1841 by Horace Greeley as a crusading organ of progressive causes with a pronounced American and Christian flavor; one contemporary writer described the paper's political stance as "Anti-Slavery, Anti-War, Anti-Rum, Anti-Tobacco, Anti-Seduction, Anti-Grogshops, Anti-Brothels, Anti-Gambling Houses." During Marx's tenure as a correspondent, the Tribune was the largest newspaper in the world, reaching more than 200,000 readers.

At the same time, there was probably no publication in the world that would have been a perfect fit for Marx's cantankerous prose and personality. Even when Marx wrote in English, his strident Germanic tone dominated. His analysis was so unsparingly radical that at times the Tribune felt the need to distance itself from its fulminating London correspondent; introducing one of his 1853 essays, for example, the editors wrote, "Mr. Marx has very decided opinions of his own, with some of which we are far from agreeing," but then conceded that "those who do not read his letters neglect one of the most instructive sources of information on the greatest questions of current European politics."