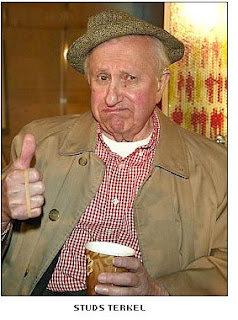 If E.P. Thompson gave voice to a new form of labour history; social history of the peoples struggles, history of the forgotten, with his Making of the English Working Class, American popular social hisorian Studs Terkel gave it voice through his interviews which were broadcast on radio and later published as books. Studs was as much a Marxist as Thompson, and both gave birth to the new labour history.

After being investigated by Joseph McCarthy and the House Un-American Activities Committee in 1953, his contract was cancelled. Terkel refused to give evidence against other left-wing activists and was therefore blacklisted and prevented from appearing on television. He later recalled: "I was blacklisted because I took certain positions on things and never retracted... I signed many petitions that were for unfashionable causes and never retracted."


Studs passed away on Halloween. His passing was noted in the press but they quickly moved on to history in the making; the U.S. Presidential election. An election that used terms not heard for over sixty years; working class, socialism, communism, marxism, depression. Studs wrote on American working class culture with his book Working and on the stories of the Great Depression. The irony of the current crash of the market which he warned about back during the Reagan revolution would not be lost on him.

When Terkel's 1970 oral history of the 1930s Depression, "Hard Times,'' was reissued in 1986 in the heart of the Reagan administration, Terkel's new introduction worked strenuously to show how the two eras were comparably nightmarish - though the 1980s never had anything like the 25 percent unemployment of the earlier era. Terkel writes: "In the '30s, an administration recognized a need and lent a hand. Today an administration recognizes an image and lends a smile.'' Part of Terkel's wide appeal was that he seemed to be a scrappy liberal in his choice of causes and concerns, but look more closely and it becomes less clear where his liberalism slips into radicalism. Though Terkel was not a theorist, nearly every one of the positions approvingly intimated by him seem to fit models shaped by Marxist theory; he even wore something red every day to affirm his attachment to the working class.

The most admired are those who, because of personal gifts, transcend the monotony of working life; the most respected are those who come to recognize those horrors most clearly and speak of them. The interviews fit the intellectual framework set up by the “Working” introduction: “This book, being about work, is, by its very nature, about violence — to the spirit as well as to the body.” That means it includes, in Mr. Terkel’s list, ulcers, accidents, shouting matches, fistfights, nervous breakdowns, daily humiliations and “scars, psychic as well as physical.” There are some, he says, who may enjoy their work, but these cases may “tell us more about the person than about his task.” He seems to cheer the questioning of the “work ethic,” though he himself clearly relished it and relied upon it.
This vision of work, though, is an obvious translation of a traditional Marxist view of the alienation of labor — the sense of disassociation that comes from the capitalist workplace. The most transformative accomplishment would be to recognize the causes of that alienation, because that would help usher in a new world; this is what Mr. Terkel seems to cherish in his most admired laborers and what he hopes to accomplish in the book itself

Being a Chicagoan he would have appreciated that home boy Obama won the election using the strategies and tactics of his old pal Saul Alinsky another Chicago radical.

And he documented that great racial divide that Obama overcame this week.

Terkel, who was often praised as the consummate listener, didn't just arrive at someone's front door and say, "Tell me about yourself." He carried on a conversation. Terkel didn't let people off the hook. In Division Street, a 19-year-old man who had left the hills of Kentucky for Chicago talks about his fear of living too close to blacks. "It doesn't bother me," he says, "as long as they stay on their side of the street." To which Terkel asks, "Suppose they're on the same side of the street?" You can almost hear the young man consider this for a moment before laughing at himself. "I imagine we might be able to be pious and get along pretty good," he replies. That was Terkel. His effervescence brought out the best in virtually everyone he encountered. His books brought out the best in America

In fact Obama's appeal to the broad base of America to recognize itself in his story was very much based on Studs giving voice to America. In fact Obama's campaign theme of hope was influenced by Studs 'radical optimism', even if it never credited him.

"I've always felt, in all my books, that there's a deep decency in the American people and a native intelligence—providing they have the facts, providing they have the information."
"With optimism, you look upon the sunny side of things. People say, 'Studs, you're an optimist.' I never said I was an optimist. I have hope because what's the alternative to hope? Despair? If you have despair, you might as well put your head in the oven."

And Studs was not one to shy away from controversy in fact he defended fellow Chicgoa activist William Ayers of the Weather Underground. His support for fellow radicals was longstanding.

Mr. Terkel also provided a blurb for the memoirs of William Ayers, the Weatherman bomber whose connection with Barack Obama has been a point of controversy. “A deeply moving elegy to all those young dreamers who tried to live decently in an indecent world,” Mr. Terkel wrote. “Ayers provides a tribute to those better angels of ourselves.”

My last encounter with Studs might give Sarah Palin chills, or at least campaign fodder. It was a couple of years ago at the Studs Terkel Community Media Awards dinner, sponsored by Community Media Workshop. Bill Ayers wasn't there, but his wife and Weather Underground comrade Bernadine Dohrn was. Little did I realize I was "palling around with domestic terrorists" that night.

Mr. Ayers is married to Bernardine Dohrn,another Weather Underground figure. Both were indicted in 1970 for inciting to riot and conspiracy to bomb government buildings, but charges were dropped in 1974 because of prosecutorial misconduct, including illegal surveillance.

And with his usual humourous aplomb and indeaftable optimism and cutting wit he wrote his own epitaph.

He was in that living room last year when he said with zest that when he "checked out"--as a "hotel kid" he rarely used the word "dying," preferring the euphemism "checking out" and its variants--he wanted to be cremated. He wanted his ashes mixed with those of his wife, which sat in an urn in the living room of his house, near the bed in which he slept and dreamed."My epitaph? My epitaph will be, 'Curiosity did not kill this cat,'." he said.He then said that he wanted his and Ida's ashes to be scattered in Bughouse Square, that patch of green park that so informed his first years in his adopted city."Scatter us there," he said, a gleeful grin on his face. "It's against the law. Let 'em sue us."

Tick, Tock, We Live By The Clock