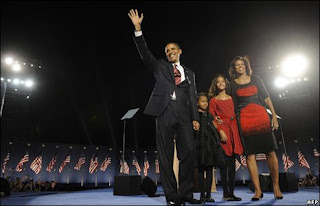 The election of Barack Obama as 44th President of the United States was the fulfillment of the drream of Abraham Lincoln and Fredrick Douglas, who himself ran for the Republican nomination for President. Obama kicked off his campaing in Springfield, Illinois Lincolns home. His politics of unity, his sweep in the polls showing America is neither Blue nor Red but purple; his politics as I have pointed out here before are those of classic 19th century liberalism. He appeals to the old Republican party, the progressive, labour party of Lincoln not the later nativist, neo-con party of Reagan. And he made that clear in his victory speech....


Let us resist the temptation to fall back on the same partisanship and pettiness and immaturity that has poisoned our politics for so long. Let us remember that it was a man from this state who first carried the banner of the Republican Party to the White House – a party founded on the values of self-reliance, individual liberty, and national unity. Those are values we all share, and while the Democratic Party has won a great victory tonight, we do so with a measure of humility and determination to heal the divides that have held back our progress. As Lincoln said to a nation far more divided than ours, "We are not enemies, but friends…though passion may have strained it must not break our bonds of affection." And to those Americans whose support I have yet to earn – I may not have won your vote, but I hear your voices, I need your help, and I will be your President too.


While McCain supporters chanted USA, USA, Barack appealed not to a narrow jingoist nationalism but to a greater vision of Americans by their own merit and pulling together in a collective effort to meet the historic challenges facing them with his call; Yes We Can.

He is a Lincoln Republican and a FDR Democrat, remembering the the latters success was based on the progressive movement that pushed not for his election but for the third party candidate; Robert La Follette. A party and movement often overlooked for its impact on American politics, after it got Teddy Roosevelt elected president.

Obama was that third party candidate who used the Democratic party to win election, while appealing to both Republicans and Independents to join him in a bi-partisan campaign to make history. He swept red states and those he didn't win he got more votes in than any other Democrat ever has. He vindicated Howard Dean's fifty state strategy, and he did it by using the grassroots organizing of Saul Alinsky and the Civil Rights movement.

Lincoln and Douglas would be proud as would both Kennedy brothers, and LBJ who in their own way paved the way for Obama's historic election. Today is the fulfillment of the dreams of Martin Luther King, A. Phillip Randolph and Malcolm X. And it is the redemption of the Democratic party forty years after the debacle in Chicago in 1968.

The tears of Afro-Americans from the young students on campuses shown on TV to the celeberities in the crowd in Chicago; Jesse Jackson and Oprah Winfrey, were the geniune mass weltashung of the realization that finally the ugly history of slavery and segregation were ended last night. And a man was elected on the merit of his belief's not his skin colour.

It's a new dawn in America.

The Blue Origin of the Red States

What have we got here? The "good of the nation", end of ideology, maybe nationalizing the automobile industry??? The American "volk" may be in for a surprise.

I wonder if corporatism under Obama will be criticized in the manner it was under Bush.

I also can't take this national unity stuff. In an ideal world, I would celebrate peace and harmony with everyone too. In a world where America's christo-fascists are pushing heavy attacks on secularism, I am more prone to cultural "class conflict".

I am worried about Obama being pragmatically centrist. If he wants to appeal to everyone, then I imagine he'll have to give up any ideas that are "too" radical -- insofar as any statist politician can be said to act in a truly radical fashion.

I would reccomend reading labour historian David Montgomery's Fall of the House of Labour on the artisanal working class movement in the U.S. and how it transformed into the trade union movement, using such tactics as calling for a continuation of the values of the American Revolution, celebrating July 4th as a workers holiday embracing those values, rather than the jingoist nationalist holiday it has become. And he discusses why labour identified with Lincoln's Republican party. Obama identifies with Lincoln and there in lies the key to his regime. He launched his campaign in Springfield at Lincolns home and his inaugaration will be held on the bicentennial of Lincolns birth. In doing so I beleive he is appealing across party lines drawn up in the post FDR era, and in particular in a way to appeal to working class republicans who do not necessarily identify with the Reagan alliance of neo-cons, paleo-cons and evangelical chrtistians. Even the later are turning more liberal with the passing of the big mouths like Jerry Falwell.
Obama is appealing to American working class values....though those values are of course the continuation of the bourgoise enlightment...ironic that in this time of so called post-modernism of the left....