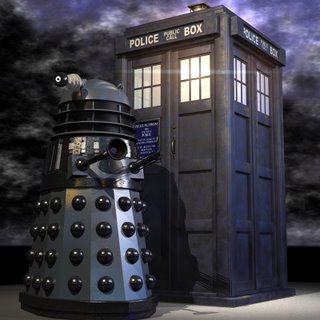 Is there a curse hanging over the current production of Dr. Who. The scripts have wandered deeply into the alternative universe style of sci-fi, dabbled in the occult, and created a subtext of conspiracy theory. All very deep stuff. But it appears they are about to lose another Dr. Who in less than two years. Tennant set to quit as Dr Who

What gives. Are the Daleks really running the show?

And bye the bye Tennants depiction of the Doctor was one of the best yet.

For reviews of the recent Dr. Who series and its two Doctors check out James Bow's excellent articles.

And could this budding relastionship on the set have anything to do with Tennants decision to cut and run?

Damn! He was good, and my girlfriend got into the show for the first time with Tennant weilding the sonic screwdriver. I particularly liked the 2 part Doctor VS Satan episode.

The 2006 Christmas episode is out on the net now - for those irresponsible folks who use bit torrent...

... time to punch a hole into another universe and stop the entropy here.

I *think* Tennant is committed to three seasons, which is on the short side, but which is also in line with the last three Doctors of the classic series.

Take what the Sun says with a grain of salt. I'll believe it when I see it.

> David, 35, will leave in the middle of the fourth series.

That's the middle of David's third season. So, it's still in line with earlier rumours and earlier Doctors, but still time for some clarifications.