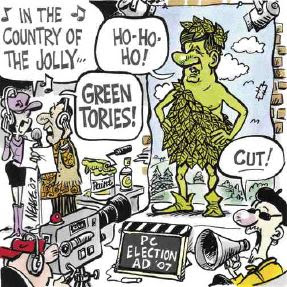 While this article focuses on how Harpers Green plan is really just the Liberals Green Plan with a new cover, the reality is that even that plan was a Made In Alberta Plan, a sop to the Oil Industry.

It is polluter pays and intensity based. Just what the Big Oil Boys in Calgary ordered.

And like the Liberal Plan intensity based regulations will simply see our Greenhouse gas emissions increase, like they did under the Liberals.

Proving Harpers point that Canada cannot and will not meet it's Kyoto obligations. Because Big Oil won't let us.

What the Liberals could not do in thirteen years, the Conservatives have not done in 13 months. And will not be able to do with their Made In Alberta Hot Air plan.

Alberta is the only province in the country with legislation to reduce greenhouse gases, but it is based on intensity -- not absolute reduction targets.

Stelmach said his government is pushing for more.

CAPP says few companies could meet the 12% target, but the proposal is "affordable" as long as the penalty is in the range of $15 per tonne of emissions.

Stelmach said he wants targets in place by July 1.

"I know industry wants to do its part and will do its part," Stelmach said. "If they don't come to the table, we'll make sure it happens. We will get it done."

He said he's confident Alberta and Ottawa are on the same page on emissions intensity targets, but stressed there needs to be a single regulator of the protocols

However, the premier maintained Alberta has invested heavily in emissions-cutting technology.

"This approach has already produced ... a 16 per cent reduction in emissions intensity from 1992 levels," said Stelmach.

Calgary-Northwest MLA Greg Melchin, who served as energy minister from 2004 to 2006, said Alberta imposes some of the tightest environmental standards among the world's major energy producers.

NDP environment critic Nathan Cullen was less generous toward Stelnach's complaints. "He's doing an apples and oranges comparison that's not going to pass muster," he told Macleans.ca. "Alberta's emissions have gone up 39% since 1990, the most of any province. He can claim whatever intensity-based games he likes; that's a business as usual scenario.

The 16 per cent drop in emissions intensity since 1990 shows progress on the environment file that has not hurt the economy, particularly the energy sector, Stelmach said Wednesday.

Emissions intensity is based on a formula that takes economic growth into consideration. The overall production of greenhouse gases in Alberta has steadily climbed and shows no signs of levelling off.

I know it's a bad plan just like Kyoto and carbon "credits" the whole point is defeated with the legislation which I think is real intention anyway.If you support Kyoto you support the same thing.

Business never regulates itself, it needs regulation so it can complain about being forced to do the right thing.

I'm not sure that Kyoto is a complete dud, but even if it is, let's here some solid ideas on how to both decrease pollution and sustain the economy.

There is an irony in the fact that the Conservatives are promoting polluter pay legislation which is exactly what Kyoto is.