It was a debacle last night for the Democratic Presidential Leadership Debate on CNN. It was all fluff and personal attacks encouraged by Wolf Blitzer and his team. There they came the eight candidates for president...nope wait a minute there are only seven.

I was watching and said hey where was Mike Gravel. Well he got locked out. You see it's all about money. But did Wolfie bother to tell us that. Nope. I had to dig around to find this;

Mike Gravel, the former senator from Alaska, will be excluded from this debate. According to Associated Press reports, Gravel didn't meet the fundraising requirement set by CNN. All eight candidates were charged with raising at least $1 million to be invited to the debate and, by September, Gravel raised about $240,000.

So it's not that you're a candidate but that you are a candidate that meets the fund raising demands of CNN!!! Of course CNN is simply doing what MSNBC had already done to Senator Gravel. It seems that media wants to determine who the winners are. Ah say it ain't so. 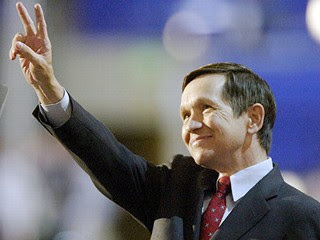 Actually if CNN had their way they would have dumped Kucinich too. But he raised enough money.

So Wolf did his best to avoid treating Kucinich as a contender. This article gives a good review of just how pathetic the treatment of Kucinich was by Blitzer and Co. And the bias was documented by rival MSNBC.

At 8:26, with Kucinich not having had the opportunity to say one word, CNN asked all the candidates to say whether they would support the Democratic nominee no matter what. They all said yes, except for Kucinich, who took the opportunity to say 10 words, receiving huge applause. His words were: "Only if they oppose war as an instrument of policy." A little vaguely worded, but I don't think that vagueness was Kucinich's intention. I think his intention was to contrast his own position with that of most of the other people on the stage. If he is not nominated, he is not going to be able to support the nominee.

Half an hour into this train wreck, no candidate had had an opportunity to speak to their priorities, but we heard a lot about CNN's. At 8:27 CNN asked Obama about immigration. At 8:29 WB dumbed this down and asked all the candidates for opinions on giving drivers' licenses to undocumented people. At 8:32 Kucinich got a chance to say his 11th word. He shifted the topic to NAFTA and took exception to the stupid question, refusing to answer it, winning loud applause.

Then CNN started asking various candidates about education, and for the first time asked Kucinich a non yes/no question. But instead of sticking with education, the topic of the questions before and after Kucinich's, WB asked Kucinich what he disagrees with labor unions on. Kucinich's answer was good, but not inspired. Maybe after 37 minutes, the Congressman had drifted off into daydreaming.

After education, CNN asked every candidate except Kucinich about Pakistan. At the end of this segment, at 8:52, Kucinich said "Hello? Hello?" But CNN refused to ask him a question.

Next CNN turned to Iraq, and this time Kucinich was included. He said that Congress should cut off the funding [big applause]. Then he answered the Pakistan question that CNN had refused to ask him. Blitzer quickly cut him off.

At 8:58, CNN came back to Kucinich on China trade, and he nailed it. And he criticized Edwards for having voted for normal trade relations with China. Edwards dodged the question. And Edwards criticized NAFTA, although he has made clear he will not end it.

When WB finally turned to Kucinich, rewording an audience member's question, he said "You were the only one who voted against the PATRIOT Act..."

"That's because I read it," Kucinich interjected to huge applause.

Kucinich nailed the question and turned to the topic of preventing an attack on Iran as well. WB saw what was coming and tried to cut him off, but Kucinich said "Impeach them now!" [huge applause]

Them. He did not say Cheney only.

Kucinich was only permitted to speak that one time during the debate's entire second hour.

From NBC's Lauren Appelbaum
There were two periods during the debate where Clinton and Obama dominated the debate. Members of the audience, as well as Kucinich, verbalized that they were upset. Although Wolf Blitzer promised all the candidates would have ample time to speak, the clock says otherwise.

Here are the speaking times for the second half of the debate:

And, the totals are:

When the candidates were asked abut labour unions, specifically a question bashing Teachers Unions for not allowing merit pay and protecting bad teachers, only Kucinich challenged the premise that unions were bad. He said he was a member of union, IATSE, that his dad was a teamster and he spoke for working people. for the working class. Yep he actually said 'working class'. Way to go Kucinich. Voice of the working class. But of course that voice was stifled by Wolf and Co. at every opportunity.

The former Cleveland mayor said he has never forgotten the poverty he grew up in, and said he still lives in a house he bought in a working-class neighborhood of Cleveland in 1971 for $22,500.

"Look, I know that I'm a long shot, but so are a lot of Americans, and they're in a much more difficult position than I'm in because they're threatened with losing their jobs, their wages are stagnate, they don't have health care benefits, their retirement's in jeopardy or their home is in jeopardy," he said.

"What I stand for is central to the hopes and aspirations of the American people, and as they understand that, my support starts to grow."

When it came to predictable questions about migrant workers Kucinich nailed it.

During the "yes or no" question on support for driver's licenses for illegal immigrants, Obama stumbles further, giving a "Clintonesque" answer before saying, when pressed, "yes."

Dennis Kucinich has the best answer, telling Blitzer: "I take issue with your description of people being illegal immigratns....they're undocumented." There are no illegal human beings. "I take exception to the way you framed that question," he tells Blitzer.

The people know too much,
democracy rising democracy now.
Rage against the machine.

I got a great still of Hillary from last night.

It seems almost like CNN wanted to help Hilary out; in fact, it almost seemed as if CNN wanted to throw their support behind her. Especially, with the rather easy questions such as whether she preferred diamonds or pearls. Hilary of course said she preferred both; however, if it was a real debate Hilary should have said she only prefers conflict-free diamonds. Additionally, Fox reported that the diamonds or pearls question was another of Hilary’s infamous planted questions, and of course there was no question to Hilary about her question planting tactics. Also, according to Fox the women who asked the question, about diamonds or pearls, really wanted to ask about Yucca Mountain and the transportation of nuclear waste across the country.

And the debate was sponsored by the coal lobby, which as we all know coal eventually under pressure and heat becomes diamonds.