Still not getting our due 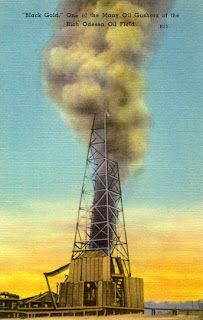 The market wonks and pundits are all a flutter about $100 oil. It hit that price last week in two, count em two, speculative deals amongst hundreds in the commodity markets. The price then dropped to between 97 and 99 dollars. This was declared a decline, with much brow wiping.

However the price of oil before last week was $95 at the end of 2007. Again a fact that seemed to be glossed over in the news about hundred buck oil. It hovered between $72 and $80 for most of last year. Then is shot up at the end of the year. Thanks to speculation not real market conditions of supply and demand. Today it is now in the high nineties.

Oil prices rose at a record rate last year a 60% hike . And they will continue to go up. It is one of the conditions of a Peak Oil marketplace.

Which means that Albertans are still getting short changed on our royalties. Since Stelmach's Royalty regime will not come into effect until 2009 and as an uncensored Alberta Energy Report reveals we have been short changed even under the existing royalty scheme.

"Fundamentals are still quite strong, and would support oil prices in the $90 to $100 range, but not much higher. The wild card is the financial markets."

Oil, gas price forecasts
Raymond James analysts are predicting that crude prices will again exceed Wall Street's consensus in 2008. "The global oil markets must push oil prices high enough to slow global oil demand growth in a supply-constrained market," they said. Accordingly, Raymond James raised its forecast of crude prices to an average $90/bbl in 2008, up from a previous estimate of $80/bbl "to reflect a tightening, supply-constrained oil market." Analysts said, "Additionally, we are raising our 2009 forecast from $85/bbl to $100/bbl due to our belief that additional oil supplies will be even harder to find in 2009 and beyond."

Raymond James analysts noted continued strong growth in domestic gas production—"primarily Barnett shale and Rockies driven"—and increased LNG imports should again push US gas storage levels to record highs in 2008. Therefore, they said, "We believe 2008 gas prices will be even weaker than originally anticipated and are revising our 2008 US gas price forecast down from $7/Mcf to an average of $6.50/Mcf for the full year, the lowest since 2004. We are also initiating a 2009 price forecast of $7/Mcf. While US gas prices could remain relatively weak through 2009, the build-out of global gas infrastructure should eventually drive global gas prices closer to BTU parity (6:1 price ratio) over the next 5 years."

Censored report shows gov't was told in 2006 Alta. missing out on oil billions

EDMONTON - Alberta Energy told the provincial government in 2004 that the province was missing out on billions of dollars in resource revenue, newly released documents show.

In a 2006 report, the department estimated that since royalty rates were capped at certain price levels, Alberta had lost between $1.3 billion and $2.8 billion in "uncaptured economic rent" for natural gas alone in 2003 and 2004, or between $700 million and $1.4 billion a year.

Another section of the report, comparing Alberta with eight U.S. oil-producing states, showed the province ranked lowest in the percentage it took in royalties and taxes.

Premier Ed Stelmach announced last fall that he was hiking royalties, but not until 2009 and not to the extent called for by the royalty review panel headed by Bill Hunter.

Alberta's NDP joined in the fray Friday by attacking Stelmach's new royalty framework as a massive giveaway to oil companies.

"When the time comes that oil regularly trades at $100, the Tory royalty system will cost Albertans over $4 billion a year."

"The two areas face similar challenges in terms of costly operations to extract crude oil and have similar right-leaning governments, yet Alaska has managed to come up with a system that generates far more money from oil than we ever could under the new royalty regime," he said yesterday.

By Mason's math, Albertans are foregoing $4.3 billion in extra oil revenue by not charging higher royalty percentages and capitalizing on $100 per barrel oil prices.

Mason said under the new royalty regime, Alberta will take in $7.4 billion, but that could jump to $11.8 billion if Alberta took a bigger piece of the pie.

"Alaska takes $42.24 on each barrel of $100 oil and the sky didn't fall as Big Oil warned us it would in Alberta just a few months ago.

"Alberta takes just $26.51 from a barrel of $100 oil. There is a huge gap there and a lot of room for us to earn more money. The price of a barrel of oil isn't going down much any time soon. As far as I can tell, the world only has so much of it to go around."