I Support The Right To Arm Bears! 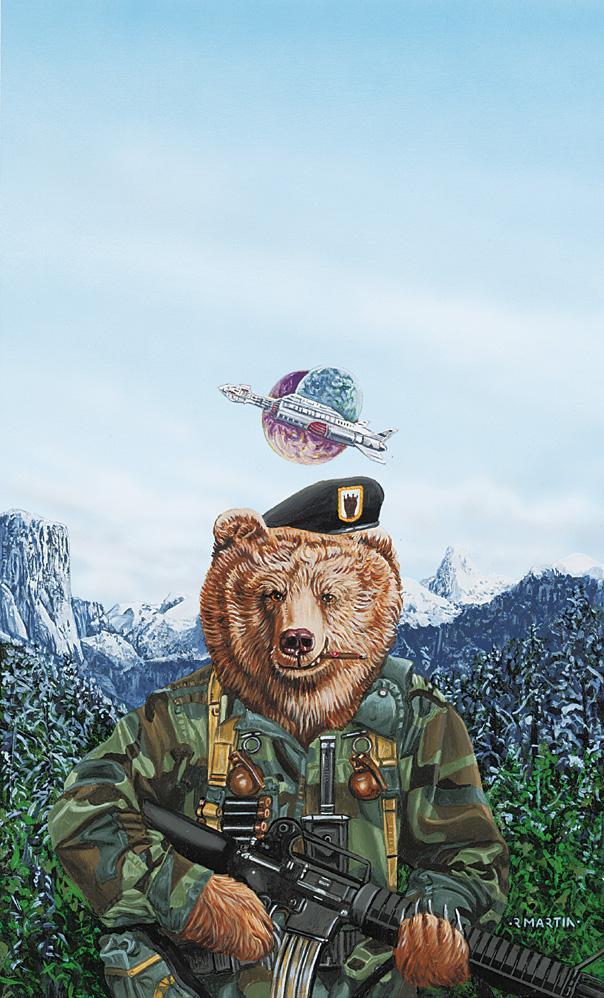 Charlton Heston would just be an old, washed up actor. A bear would run the NRA as according to 2nd amendment...only bears can have guns.

"Bears are not companions of men, but children of God, and His charity is broad enough for both... We seek to establish a narrow line between ourselves and the feathery zeros we dare to call angels, but ask a partition barrier of infinite width to show the rest of creation its proper place. Yet bears are made of the same dust as we, and breathe the same winds and drink of the same waters. A bears days are warmed by the same sun, his dwellings are overdomed by the same blue sky, and his life turns and ebbs with heart-pulsings like ours and was poured from the same fountain....." John Muir

Last week's local section of The Washington Post celebrated -- yes, celebrated -- the killing of a black bear by an 8-year-old girl. The compassionate among us mourned not just the cruel and completely unnecessary killing of one of nature's most fabulous creatures, but the love of violence and destruction instilled in this child by her family.
That certain Americans sadly find valor in killing is beyond doubt. But in many ways, it's also beyond belief. That they would take pleasure in a wantonly destructive act and train this into an 8-year-old female heart is beyond forgiveness.
We've heard it all before. Hunters love nature. Hunters work to preserve wildlife. Hunters are great stewards of the environment. Hunters eat what they kill. What was the justification here? That enough bears exist in Maryland to kill them off without destroying the species, as mankind once almost did. Only cowards could find solace, justification and pride in that.
There's no sport in taking down a large, lumbering animal with a .243 caliber rifle, the kind used by the young girl portrayed in worshipful prose by the Post. That's the same caliber weapon NATO uses in its assault weapons. There's more technology than sport in today's high-powered, scoped weapons. (The Post did not report whether the rifle she used was scoped or not.)
Tags
Alberta
Canada
wilderness
Big Game Hunting
Grizzly
endangeredspecies
environment
hunting
Posted by EUGENE PLAWIUK at 6:16 PM

Thanks for sharing.I found a lot of interesting information here. A really good post, very thankful and hopeful that you will write many more posts like this one.
kodi.software
plex.software
luckypatcher.pro

Tutuapp is very reliable app because it works in all the devices. There us no restrictions to download this app, In your MacOS you can download this app without paying anything if you want to get any application which is android then also you can download it with Tutuapp. Users trust on this app if you Tutuapp Download in your Android & iOS then also your device speed will be same it not comes with viruses to hang your system it's amazing app you'll get all your apps and other items which you want to use no one can irritate you.