The Limits of Freedom 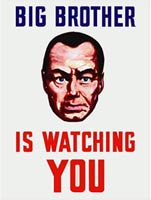 When we go to hang the last Aristocrat it will be the capitalist who sells us the rope. V.I. Lenin

"Freedom of the press is guaranteed only to those who own one." A. J. Liebling.

"Your abhorrent activities in China are a disgrace. I simply do not understand how your corporate leadership sleeps at night," Rep. Tom Lantos, the ranking Democrat on a House International Relations subcommittee on human rights. Lantos' California district includes Silicon Valley.U.S. Congress Grills Internet Execs On China Policies

The computer search engine corporations are under attack for wanting to do business with China. Wal-Mart isn't of course, nor is Pepsi. Nor is Nike or Adidas put under scrutiny for the forced labour used to make their products in China or Vietnam. And China is now a member of the WTO, what's with that?

It appears that America expects to have corporations function by two different sets of rules when it comes to China and other state capitalist regimes in the region such as Vietnam. Human Rights when its convenient for some and not others. Its downright Orwellian.Big corporations making $32 billion a year from sweatshops

The Internet coporations are held to a different level of morality as businesses, because the Internet is seen as the ultimate function of the American First Amendment. It is the new press, the new means of communications, the new media. So to rephrase A.J.Liebling, the Freedom of the Internet belongs to those who own it.

And it is the U.S. and it's corporations over all that own it, despite efforts this past year to internationalize that ownership. And it is U.S. corporations that are trying to expand their ownership into countries like China that have sovereign Internets. Just as they have they have their own TV stations, Media and newspapers.


But the U.S. Congress is all upset that Google,Yahoo, Cisco Systems and Microsoft are censoring internet access at the demand of the Chinese state. Yet these American High Tech businesses give the same excuses as given by the Bush Administration and by the big corporations for doing business with China,they all see China as a huge consumer market; "by being there and doing business we will bring freedom."

WASHINGTON -- Not a moment too soon, Congress is turning up the heat on the cozy relationship that Internet giants Google, Yahoo Inc., Microsoft Corp. and Cisco Systems conduct with China's cyber-police. Top executives from the four firms testified last week before a House subcommittee. The most intriguing questions concerned morality. The spokesmen said that although their companies don't like China's censorship of the Web, censored information is better than none. Besides, they argued, companies have to comply with the laws of the countries in which they operate.

The State, any State, even the most democratic state still wants to punish free speech because it is an affront to the morality of the state; law and order. Ironically while human rights activists have complained about China and the U.S. Congress is investigating the Chinese censorship of the Internet, the Chinese throw these very reasons back in their faces.

In a rare public statement this week about Internet filtering, Liu Zhengrong, who supervises Internet affairs for the information office of China's State Council, asserted that China blocks only a "tiny percentage" of Web sites that are available abroad. At a briefing reported by the New York Times, he said that regulating the Web is designed to protect children and that his government's efforts differ little from the controls of other nations, including the United States.

But the real reason that the Americans are concerned is not about Freedom of Speech for oppressed Chinese citizens, not with millions of them accessing the net everyday now. Nope it comes down to good old capitalist competition. China wants technology, and access to technology, and one of the best ways of doing that is hacking. Cyberwarfare. Underneath the U.S. concern for human rights is its concern for maintaining its technological and military secrets.

The big high tech companies want to know how China builds it's firewalls and internet security systems, and China wants to export that security abroad. Its good old capitalist competition in the realm of high tech.

At least three dozen governments around the world try hard to control the online environment. Many of the most extensive efforts are found in regimes in the Middle East, in places like Iran, Saudi Arabia, Yemen and the United Arab Emirates, according to the OpenNet Initiative. Asian regimes, like Uzbekistan, Burma and Vietnam also filter the Internet. But no state approaches the censorship-and-surveillance apparatus of China. It's therefore not surprising that censorship has become a popular Chinese export. Techniques and software for Internet control, developed in China, are now being applied in countries like Vietnam and Iran.

China has also proved that censorship pays: it has developed a successful model for how government and business can collaborate to censor a nation's Internet activities. This model could be applied in any country. If we're not careful, we may wake up one day to discover that what a person can see and do on the Web will be radically different depending on which country he or she lives in: the Internet will become "The Internets." And U.S. tech firms won't have much of value left to sell if the Internet ceases to be the wonderful, world-connecting thing it is today. They must find a way to make their money in China without checking their values at the border. Morality aside, the long-term survival of their industry depends on it.

Rebecca MacKinnon is a fellow and John Palfrey is clinical professor of law and executive director of the Berkman Center for Internet & Society at Harvard Law School. Opinion: Censorship Inc. Newsweek

And the U.S. government and its military industrial complex wants this information too. The better to spy on its own citizens. But what really concerns them is that if the Chinese can build such effective software applications that can monitor search engines and sweep the web. What is stopping them from using their hacks and hackers through these same search engines as backdoors to snoop on the U.S. and steal the technological and military secrets it needs. That is the real story here, not Human Rights. Its all a matter of cyberwarfare and intellectual property rights, not Human Rights.

In connection with the third point, the QDR said the choices made by China, India and Russia "will be key factors in determining the international security environment of the 21st century."

Most of the 92-page review focused on China. The QDR expressed concerns about the rapidly developing nation, saying, "China continues to invest heavily in its military, particularly in its strategic arsenal and capabilities designed to improve its ability to project power beyond its borders."

The review went on to criticize the secrecy surrounding China's military buildup, stating, "The outside world has little knowledge of Chinese motivations and decision-making, or of key capabilities supporting its military modernization."

It also pointed out that China has been focusing on developing nonconventional military capabilities, such as those related to electronic and cyberwarfare. It expressed concerns about this, saying they were "disruptive military technologies that could, over time, offset traditional U.S. military advantages."

At a press briefing following the release of the QDR, Ryan Henry, U.S. principal deputy defense undersecretary for policy, expressed the Pentagon's strong concern over China's increasing influence in the East Asian and Pacific regions. "We think China should have a military capability sufficient to meet its genuine security needs," Henry told reporters.

MoveOn PAC is fighting for Internet freedom in a different sort of way. They are siding with Google and other companies that don't want to pay extortion fees to ISPs that could lower the priority given to some services if the law is changed in the USA.