King Ralph made his annual infommercial to the Volk of Alberta just before the opening of the annual and only required sitting of the Legislature. In the radio ads promoting the Ralph Show on CTV it was billed as Ralphs Vision for Alberta. Read or watch the Address to see how other Albertans, and I, imagine Alberta.

The Premier was to tell his volk his vision of Albertas future and we were all to ooooo and ahhhhh and then applaud. It cost us $170,000 because Ralph never uses the already paid for services of Canada's public Broadcaster CBC, and he couldn't use the Provincial TV Radio outlet ACCESS/CKUA because he privatized it.

Well his vision was certainly lacking in orginiality Klein announces $1 billion boost to Heritage Fund and then as predicted here the King embraced the other King, King Coal. But here again his vision was blurred by the rose coloured glasses he was wearing. It wasn't imaginative but it certainly was a fantasy.

"We already use clean coal to meet more than half of our electricity needs," the premier said.

"The coal beneath our feet contains twice the energy of Alberta's conventional crude, natural gas and bitumen combined."

But Klein's statement about how much power is being generated from "clean coal'' was immediately challenged.

Mary Griffiths, with the Alberta-based Pembina Institute, said the province's coal plants have significant emissions, so there is no clean coal generation.

"They have emissions of sulphur dioxide, nitrogen oxide, mercury and other heavy metals, and very large emissions of carbon dioxide which causes global warming," she said.

"I don't understand where the premier got his information from."

David Lewin, chairman of the Canadian Clean Power Coalition, also confirmed that Alberta has no coal-fired plants that meet the latest definition of "clean coal."

"We're a fair ways away from having zero emission coal-fired plants. That technology doesn't exist," said Lewin, who also gave a testimonial in the broadcast.

Alberta's newest coal-fired plant uses emissions technology from 2000, while most of the province's coal generators use 20-year-old technology, he said.

Not to be detered King Ralph also Announced that he would find a cure for
Cancer.The man is an absolute wizard. 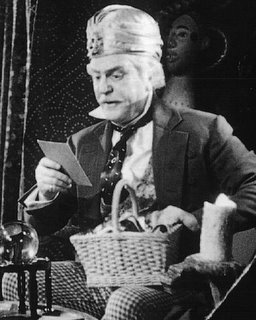 Curing Cancer, creating clean coal technology out of thin air. He even compared Alberta to a little slice of Heaven.

"In the future I see for Alberta, no one will need to worry about where they’ll live, or who will look after them as they enter their golden years." Yeah unlike today.

Ralph is not only our King he is an absolute Wizard. Wizard of Oz that is.

What is more important is WHAT HE DIDN'T SAY. Not a word about his much vaunted Third Way for Health Care Reform, the real source of his My Way or the Highway. But of course this is classic Klein. He has been announcing Health Care reform for a Decade...and all we get is studies, reccomendations, more studies, focus groups, more reccomendations, Bill 11, more studies, focus groups, International Conference, and finally a private untendered contract to a health care priavteer to see if we can reintroduce the old Alberta MSI scheme.

Nil to say on 'Third Way'

The most interesting aspect of Premier Ralph Klein's annual televised address last night was not what he said - among other things a vow to put some big money in the bank - but what he did not say.

Klein missed a perfect opportunity to explain his Third Way for health care directly to Albertans, says a University of Calgary political scientist.

"If you were going to move very dramatically on health care, boy, this is your opportunity to speak to Albertans. Lay a little ground work, make headlines," David Taras said following Klein's annual televised address.

And he had nothing to say about changing Alberta's draconian pro employer labour laws that became a public outrage this summer during the violent Tysons Strike, which his labour Minister promised would be changed by the legislature. Not done in the the fall session nor apparently on the agenda for this spring session. Another hollow promise to the workers and immigrants in this province.

Yep the outgoing, soon to retire, wait another year, I promise I will go, King Ralph's vision was myopic despite the rose coloured glasses. He is in serious need of corrective lenses.

Mr. Mensah said the popular Premier, who has said this will be his fourth and final term, could regain much-needed credibility with the public if he can quickly outline a clear vision for Alberta's bulging coffers.

"What we've gotten so far hasn't really addressed that question of long-term planning," he said.

"He's thinking bigger, but it's hard for Albertans to connect the dots in his thinking," Mr. Gibbins said, mentioning recent spending announcements, including $1-billion for cancer research and treatment.

He is all about doing it My Way, Perhaps he should be singing If I Only Had A Brain or a Heart.

And now, the end is near,
And so I face the final curtain.
My friends, I'll say it clear;
I'll state my case of which I'm certain.

I've lived a life that's full -
I've travelled each and every highway.
And more, much more than this,
I did it my way.

Regrets? I've had a few,
But then again, too few to mention.
I did what I had to do
And saw it through without exemption.

I planned each charted course -
Each careful step along the byway,
And more, much more than this,
I did it my way.

Yes, there were times, I'm sure you knew,
When I bit off more than I could chew,
But through it all, when there was doubt,
I ate it up and spit it out.
I faced it all and I stood tall
And did it my way.

And I'm not particularly sure what public outrage you saw. Most people in the public saw a violent and heated labour dispute that ended up seeing both the union and the company losing high level staff members to jail for actual crimes rather than the imagined offense of paying poor immigrants exactly what the immigrants had come here to make.

Ah well, we'll get rid of Klein and his fellow Trudeau Liberals in the Tory caucus so that Ted Morton can come in and do a well-needed housecleaning. Or Gary Mar can win, and the Alberta Alliance can drive the Conservative Party into poll numbers so low that only the Liberals and NDP will do worse. So win-win, I suppose.