Chuck Jones Explains It all 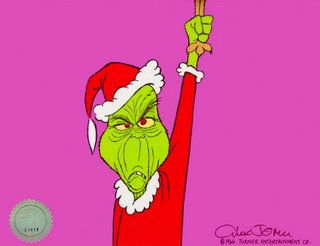 Thumbing through the Edmonton Sun I came across this article on pop culture icons of Christmas....

Why, after 40 years, do the Grinch, Charlie Brown and Rudolph stay at the top of our annual Christmas lists?

They all premiered during my "wonder years," when I was seven, eight, nine. Back then, you believed in Santa Claus.

Are these holiday shows that won't go away just more evidence of Boomers imposing their cherished kiddie culture on future generations? Perhaps, except today's children seem just as enchanted by Rudy, Chuck and the Grinch as I ever was. Christmas might not come from a store, as the Grinch discovers, but it seems to belong to a simpler, hand-crafted age.

With all the advances in computer-generated animation, you'd think a Merry Shrek-mas would have run Rudolph and his clunky stop-motion pals out of town by now, or that The Simpsons would have supplanted Snoopy each December. Instead, eggnog and Yule log still equal analogue. There's nothing Ho-Ho-Hi-def about Christmas on TV

.Bill asks an important question why are these classic cartoons, each of which is actually only a half an hour in length, still so popular, so captivating? Well Chuck Jones the illustrator, animator, and Director of the Grinch, and many a Bugs Bunny cartoon, provided the answer back in the early 1970's.

I was a founding member of the Edmonton Science Fiction and Comic Arts Society, and early on in our existence we showed old classic Sci-Fi and Horror films; Cabinet of Dr. Calgrari, Metropolis, Nosfertatu, and classic Bugs Bunny Cartoons, etc. Stuff we had all heard and read about and never actually seen.

So we subjected Edmonton to our tastes in movies and sci fi. Anyways we lucked out and were able to book Chuck Jones to come to Edmonton and speak on the history of Cartoons, they were never called 'toons then if anything Chuck called them animations, or animated art. Emphasis on the 'art'.

The secret was revealed to us pasty faced SF geeks in awe of the Great One. Chuck brought his own collection of great old Warner Brothers Classics, Looney Toons, Bugs, the whole raft.

In a two hour lecture worth every cartoon he showed, he talked about the studio system, the gang that made the cartoons, the whole culture of animation in the fifites and sixties.

And two points stood out. 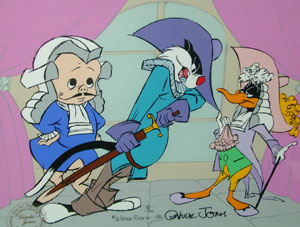 autonomy to make cartoons, cause Warner was clueless about their animation studios. Jim Warner actually thought they made Mickey Mouse.

Hence the wonderful parody of him in the classic Daffy Duck as the Scarlet Pumpernickel, where he presents his story line to Warner, who is a shadowy figure offstage.

Daffy and the Bugs gang, including Jones and the whole Warner Brothers animation studio, were slagging the boss on celluloid that would live forever.

This was the era of Sesame Street, of 'childrens' programing on TV, where upon liberals would put into practice the latest childhood development theories and subject us to them. Chuck hated that crap. And said so.

For Jones and the whole Bugs crew, Tex Avery, Bob Clampet, Fritz Ferleng, and the man of a thousand voices; Mel Blanc, at Warner Brothers, some of the most brilliant animators America has ever produced, the whole point of their comedy was that THEY WERE NOT WRITING FOR CHILDREN. Full stop. Period. They were writing and illustrating the comedy routines for themselves, to crack each other up, if they succeeded, the joke was put onto celluloid forever.

They were not talking down to their audience, because they were the audience!

If a joke did not crack them up it didn't go in. Thus the Studio system allowed them to produce adult humour that would live forever, because they were exiled to the back lot at Warner Brothers.

It allowed Jones and company to change our popular culture forever. We learned

the joys of classical music and Opera, surrealism in art, popular jazz, and that real comedy could have no dialouge except for;

Hello My Baby, Hello My Darling, Hello My Ragtime Gal, RRRRRIBBITT. As we learned from Michigan J. Frog.

These were Cartoons for Adults. If children understood them great, a bonus, but they were cartoons made for Adults by Adults.

And so we watched Adult cartoons, aimed at adult cinema audiences, since Looney Toons began as a serial cartoon to introduce the main feature picture in movie theatres.

By the sixties with the advent of TV the serials were now our Saturday Afternoon cartoons. A joy to watch and learn from. Every year growing up I grasped more and more of the naunces and subtlties of these cartoons. You learned as you watched them. They were never boring, they taught you. Because they were Adult cartoons. 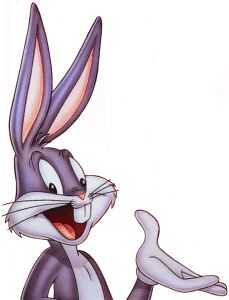 And they challenged us to think. Why was Peter Lorre in early Bugs cartoons, cause he was the popular character in the thirties and forties horror films that Jones and Company were parodying.

Thanks to Jones and company, we were never subjected to Kiddie Toons or animated drivel we were treated to intelligent cartoons. And we love them still.

Posted by EUGENE PLAWIUK at 6:47 PM

It just goes to show that when something is well done, it becomes timeless and will be around for a very long time.

Take Star Trek, for example: it was not some mindless sci-fi show in the 1960s; it had an important message as well, and this message has survived to this day. In September, Star Trek celebrated 40 years, and despite some current problems at Paramount Pictures over the franchise, it won't go away any time soon.

Besides, with so much rubbish on TV these days, who can't fault people for looking forward to seeing those classics at Christmas time?