Common Sense of The Common People

90 per cent of Canadians don't think they're wealthy, survey finds

Well the majority ain't that's true, but 10% of these folks are lying to themselves if not to pollsters.

Butdespite all the whooping over the boom in capitalism from the boys on Bay Street and Wall Street, well folks don't feel it in their pocketbooks.

Salary concerns were a prime consideration for many respondents in the Mackenzie Investments study, with 40 per cent saying they expected their incomes to hover around the same mark over the next 10 years, dipping or rising marginally.

And for all the criticism of the Boomers they at least recognize that we are in a debt crisis, which government and business refuse to see.

According to the poll, 79 per cent of respondents said they feared that if shopping continued
to be viewed as a recreational activity, Canadians could face a crisis where they spend too much with little regard for the future. 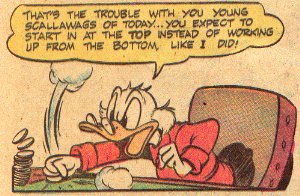 "Overspending today but worrying about not having enough in the future is like waiting for your roof to fall in — it certainly isn't worth the wait," John Dale, executive vice-president of Mackenzie Investments, said in a release. "The 'haves and have-nots' in the future may be determined in part by the 'shop and shop-nots.' "

But their kids are shopoholics. It is the truimph of consumerism over productivity, the triumph of the American ideology of the lesiure class . Their parents had the middle class dream their kids live it. But it is still a dangerous myth.

But the study noted that more than any other demographic, young people tended to see shopping as a recreational pastime. About a third of respondents between the ages of 14 and 19 said they spent money as part of a larger socializing ritual, as compared with 13 per cent of all Canadians.

More than 92 per cent of young Canadians expect the same or more expensive lifestyles as their parents, it reported, suggesting their expectations may not be realistic.