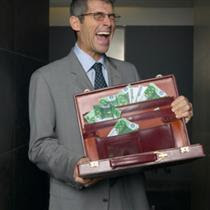 Merck still has a $1.76 billion tax dispute with Canadian authorities, and has filed an appeal with the Canada Revenue Agency that is expected to be reviewed this year, spokesman Raymond Kerins said.

Tax and accounting analyst Robert Willens of Lehman Brothers said in such cases drugmakers generally sell medicines at low cost to subsidiaries in countries with lower tax rates, which can then mark up the prices and keep more profit after taxes.

Merck is not the only Big Pharma company to get caught out engaging in this tax swindle known as transfer pricing. It's based on off shoring ones corporation or personal taxes in a tax haven thus avoiding paying taxes in the country of operation. Something the Irving's have done for years.

We have been participating in OECD for 20 years now on transfer pricing guidelines for instance. That work is critical to having a set of international rules that work for everybody.

We do try and understand the way that businesses operate and certainly there are many needs a company will have for offshore treasury functions. We start to get a bit upset about these when we find that they aren’t really carrying out real treasury functions, that there aren’t, possibly, real people there or very few people there and very few facilities for them to do this work. That is when we get into arguments as to whether or not it is a genuinely commercial function of the group or whether or not it is some sort of tax mitigation or tax planning.