Maybe Satan made him do it.

A peacock that roamed into the parking lot of a fast-food restaurant was attacked by a man who vilified the bird as a vampire, animal-control authorities said. The peacock, a male several years old, wandered into a Burger King parking lot in the New York borough of Staten Island and perched on a car hood Thursday morning. Charmed employees were feeding him bread when the man appeared.

The peacock is sacred to Satan/Lucifer/Iblis according to the Yezedi (aka Yezidi, Yazidi).

Melek Taus, "The Peacock Angel" (in Arabic script ملك طاووس), is the Yazidis' name for the central figure of their faith. 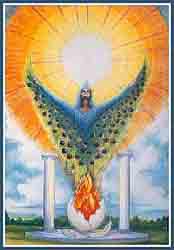 Then said the Mighty Lord, "O Angels, I will create Adam and Eve, and will make them human beings, and from them two shall arise, out of the loins of Adam, Shehr ibn Jebr; and from him shall arise a single people on the earth, the people of 'Azazel, to wit of Ta'us Melek, which is the Yezidi people. Then I shall send Sheikh 'Adi b. Musafir from the land of Syria, and he shall come and dwell in Lalesh".
Meshaf Resh: The Black Book

Azazil (Arabic: عزازل) is often called Shayṭān ( "the Accursed one" الشيطان = "Satan" in the Bible.) When Adam was created in paradise, Allah commanded all the angels to bow down to him. All did as ordered except Azazel, who was too proud to bow down to a mere mortal, protesting: "Why should a son of fire [an angel, or star, formed from that eternal element], fall down before a son of clay?" So God cast Azazel out of Heaven and changed his name to Iblis (إبليس) meaning "despair" or "the despaired".

The Yazidis consider Melek Taus to be a benevolent angel who has redeemed himself from his fall, and has become a demiurge who created the cosmos from the Cosmic Egg. After he repented, he cried for 7000 years, his tears filling seven jars, which then quenched the fires of hell.

Melek Taus is sometimes transliterated Malak Ta'us or Malik Taws. In Semitic languages, malik/melech variably means "king" or "angel". Taus is uncontroversially translated "peacock"; however, it is important to note that peacocks are not, at least currently, native to the lands where Melek Taus is worshipped. This has lead some to speculate that the worship of Melek Taus was imported from India, though it is more likely the peacock iconography is a development from earlier representations depicting the god as a native fowl, such as a bustard. The Yazidi believe that the founder of their religion, Sheikh Adi Ibn Mustafa, was an avatar of Melek Taus. In art and sculpture Melek Taus is depicted as peacock. The Yazidi are thought to be unique in their depiction of their primary god as a bird.

Posted by EUGENE PLAWIUK at 4:04 PM