Dino In The Basement

There is no need for expensive expeditions to exotic locales to discover rare or undiscovered dinosaurs. One simply needs to go to the basement.

For the Royal Ontario Museum, the recent discovery of a massive Barosaurus skeleton is quite a find: It was inside the museum, and it's been there for 45 years.

In 1962, ROM curator Gordon Edmund brought the dinosaur skeleton to the museum in a trade with the Carnegie Museum of Natural History in Pittsburgh. But the specimens were forgotten when Dr. Edmund retired from the museum in 1990; he has since died.

"Nobody at the museum knew about them, or what their significance was," said David Evans, the ROM's associate curator of vertebrate paleontology. ''Or that they belonged to a single animal. The curators here over the last 20 years didn't realize we had the specimen in the collection and didn't know what it was."


ROM director William Thorsell, standing with a 150-kilogram Barosaurus thigh bone and drawing of the dinosaur, describes the upcoming Age of Dinosaurs exhibit, opening on Dec. 15.

Untouched on a shelf for 113 years: a dusty bone of the dinosaur no one knew existed

Mike Taylor was rummaging among the shelves of the Natural History Museum in London when he came across it - a label stuck to a dusty fossil that struck the part-time dinosaur enthusiast as distinctly wrong.

For 113 years it had barely attracted a second look, stored deep below the museum after being dismissed as just another fossil from a common North American dinosaur. In fact, what the computer programmer from Gloucestershire had found was evidence of a new species that lived 140m years ago.

The dinosaur, now named Xenoposeidon proneneukus, belonged to a previously unknown family of sauropods, according to the journal of the British Paleontological Association, which reports the discovery for the first time today.

It was about the size of an elephant and weighed as much as 7.5 tonnes, the paper suggests.

The astonishing find came last January during a day of PhD research spent picking through bones to learn more about sauropods, the largest creatures ever to walk the Earth. Taylor was visiting the museum as part of a his research at Portsmouth University. He hoped to work out what fossil fragments tell us about sauropods unearthed in a giant slab of rock that stretches under most of Britain and out to the continent. 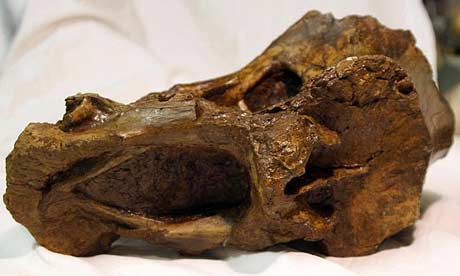 The bone of a Xenoposeidon proneneukus dinosaur. Photograph: Portsmouth University/PA

That was two finds last week.

Then there was this case of the dino in the basement at the University of Alberta last year.

And this case as well.

The discovery of a six-foot-long, bipedal and toothless fossil in a museum basement suggests crocodile ancestors looked like some bird-like dinosaurs that lived millions of years later, scientists say.

The crocodile ancestor fossil, found in the basement of New York's American Museum of Natural History, is an example of how similar body types can evolve several times over.

A museum team excavated the 210-million-year-old fossil in the 1940s from the Ghost Ranch Quarry in New Mexico.

This site has produced numerous fossils of Coelophysis, small, carnivorous dinosaurs that lived in the Triassic period.

Posted by EUGENE PLAWIUK at 5:07 AM