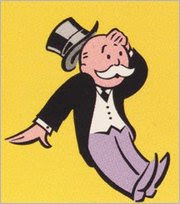 As Eric Janzen in the February issue of Harpers Magazine warned this is a super bubble that just burst.

A financial bubble is a market aberration manufactured by government, finance, and industry, a shared speculative hallucination and then a crash, followed by depression. Bubbles were once very rare—one every hundred years or so was enough to motivate politicians, bearing the post-bubble ire of their newly destitute citizenry, to enact legislation that would prevent subsequent occurrences. After the dust settled from the 1720 crash of the South Sea Bubble, for instance, British Parliament passed the Bubble Act to forbid “raising or pretending to raise a transferable stock.” For a century this law did much to prevent the formation of new speculative swellings.

The housing bubble has left us in dire shape, worse than after the technology-stock bubble, when the Federal Reserve Funds Rate was 6 percent, the dollar was at a multi-decade peak, the federal government was running a surplus, and tax rates were relatively high, making reflation—interest-rate cuts, dollar depreciation, increased government spending, and tax cuts—relatively painless. Now the Funds Rate is only 4.5 percent, the dollar is at multi-decade lows, the federal budget is in deficit, and tax cuts are still in effect. The chronic trade deficit, the sudden depreciation of our currency, and the lack of foreign buyers willing to purchase its debt will require the United States government to print new money simply to fund its own operations and pay its 22 million employees.


But unlike the South Sea Bubble or the Tulip Bubble, or even the Dot Com Bubble this one has brought capitalism to its global knees.

Bank of Canada Governor Mark Carney underscored the deteriorating situation when he said Canada’s business conditions will worsen alongside other industrialized countries next year and the Canadian economy may slip into a recession for the first time since 1992.
“We are predicting very marginal growth in 2009,” Carney said in an interview with Bloomberg News, when asked if he thought a recession might happen. “By definition that’s close to negative growth, and if we have a balanced forecast you can see it going either side, so it’s a possibility."
Carney cut the Bank of Canada’s key interest rate to 2.25 per cent last month and said the world’s eighth-largest economy would shrink this quarter and stall in the first three months of 2009, just skirting the two quarters of contraction that most economists call a recession. He has said further rate cuts may be needed to prop up economic growth.
In Brazil, Flaherty also said the world is facing what appears to be a runaway economic downturn. He noted that the International Monetary Fund continues to lower its growth forecasts month by month. The IMF now predicts the major industrialized Group of 7 countries will fall into a recession next year - with the exception of Canada, which is forecast to post a minuscule 0.3 per cent growth.

For the leading spokespeople of capitalism to say they didn't see it coming well thats laughable. It could be excused as Hegelian black humour if the mouthpieces of capital were not so sincere in denying the obvious; recession and the dreaded follow through; depression.

Hegel remarks somewhere that history tends to repeat itself. He forgot to add: the first time as tragedy, the second time as farce.

And Then There Was One

Posted by EUGENE PLAWIUK at 4:14 AM