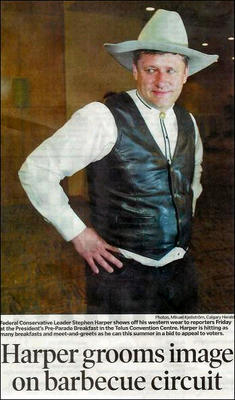 It didn't work. Not looking like this.
(And what is with this fey hand on the hip routine?)

Harper gained power through the machinations of the Alberta powerbrokers in the Alliance Party who ousted Preston Manning and then Stockwell Day.

Despite his Alberta inspired belief in der fuerher prinziple;

"his inability to reach out, of his deeply held suspicions of those who don't march in single file with him, of his tendency to walk away when the going gets tough."

He is about to suffer the slings and arrows of his membership, unlike his mentor King Ralph. Harper is still acting like a character out of Shakespeare who may soon be uttering 'Et Tu Bruti'.

As the Globe and Mail reports:
Majority want Harper replaced, poll shows
Stephen Harper moved yesterday to revive his political fortunes in the electoral heartland of Ontario even as a new poll shows that 59 per cent of Canadians want him replaced, including more than one-third of his own supporters.

While the Bloggin Tories all run around defending the Harper (with cute little buttons on their blogs), and his one man school for scandal;MP Gurmant Grewal, it has been for naught.

The New York Times reported on his failure to connect with Canadians. Voters turn from Tories in Canada In fact even right wing columnists in the Unitcd States have criticized Harper for his lack of populist politics let alone popular appeal. Yoiks that's the kiss of death for sure.

In fact the recent spate of Canada hating from his own Fianance Critic Monte Solberg, Tory columnists, and tory bloggers has added fuel to the fire.

And Harpers silence over Grewal and the Canada Hating/Baiting comments has only exasperated Canadians, even those who support the Conservatives.

As Belinda Stronach, when she crossed to the Liberals, correctly pointed out Canadians want an oppositon party from the Centre.

"I am sometimes asked why I did not sit as an independent MP. The answer is simple. I came to realize that the Conservative Party was being led in a direction with which I was not comfortable, especially as an urban Ontarian."

"I've been uncomfortable for some time with the direction the Conservative party was taking," Stronach said. "I regret to say that I do not believe the party leader is truly sensitive to the needs of each part of the country and just how big and complex Canada really is." And Canadians appear to agree with her more and more. Her defection from the Conservatives moved the party further to the right.

Unfortunately for Harper and his rag tag collection of Blogging Tories, Alberta First MP's and misanthropic media supporters, ensconced as he is in the hot house of my way or the highway politics of Alberta, he is out of touch with the politcs of the Centre and the Centre of Canada.

Last summer, Harper answered his critics by recruiting a bevy of Quebec organizers, distancing himself from the University of Calgary crowd that helped him run the Canadian Alliance — although he still speaks regularly to former chief of staff Tom Flanagan and policy guru Ken Boessenkool — and importing senior staff from the ranks of the now-defunct Progressive ConservativOne of those people, communications director Geoff Norquay, announced this week he's leaving. He was followed by Yaroslav Baran, the party's strategic communications manager, bringing the running total of communications departures to four. Harper has also lost Nancy Hepner, who co-ordinated the party's daily question period strategy and coached MPs on how to formulate their queries. Toronto Star

And while the Bloggin Tories go a Liberal Bashing and even former Chretienite Liberals like Warren Kinsella go soft on Stephen it is for naught. While Flipping burgers, Harper is followed by scandal and staff deserting a party listing heavily to the right.

Of course Warren's new found fawning for Harper is cause he's p.o. with the Marinites (though some might suspect he has a soft spot for a fellow Calgarian). Warren and the old guard Liberal's hope to oust PM from being PM, ala Richard the Third. And his poll numbers show he and they should be concerned. This leaves the average Canadian in the center looking elsewhere.

And who do they find in the wings, well if it ain't smilin' Jack, leader of the NDP who has gained most in popularity, with the folks in the Centre. And unlike Harper he can feel comfortable with all Canadians.

Like Jack's presence at the Toronto Gay Pride Parade, one of the largest in North America and certainly the largest in Canada, which drew a crowd of hundreds of thousands.

Harper missed it not because of politics but because he was being petulant.

He decided instead to adress a Muslim convention in Missasagua, a last minute arrangement, and even then he only addressed 'the mens section', of the convention. Opps, I guess Harper believes Muslim women only vote the way their husbands tell them to. Sort of like MP Nina Grewal.

Of course he pandered to yet another patriarchical religious group promising them once elected as PM he would repeal the Same Sex Marriage act. But that appears to be another promise that is for naught, as the majority of Canadians accept the new law.

"Ottawa — Canadians do not want their political leaders to undo historic legislation allowing gays to legally marry in the wake of a pledge from the Conservatives that they would do just that if elected. In a new poll conducted for The Globe and Mail/CTV, 55 per cent of Canadians surveyed say the next government should let same-sex legislation stand, while 39 per cent would like to see an attempt made to repeal it. A further 6 per cent said they did not know. The results appear to bolster Prime Minister Paul Martin's remarks two weeks ago that Canadians do not want to revisit the issue, despite a promise by Conservative Leader Stephen Harper that he would rescind the law if he becomes prime minister in an election expected next winter. Pollsters said Mr. Harper's promise to repeal the legislation may be helping to consolidate Liberal support. For example, Canadians who are undecided on whether to support the Liberals or the NDP may find themselves opting for the Liberals if they fear Mr. Harper would follow through. Pollsters said they also found that while Conservative supporters are the most likely to favour an attempt to repeal the legislation, "potential" Conservative voters are more likely to prefer that the current legislation stand.Mr. Harper's position may only consolidate his Conservative base, they said, and not expand his support to other groups."

Question: Fore each of the following leaders, I'd like to know if your opinion of them has improved, stayed the same or gotten worse in the last year?
Improved Stayed the same Gotten worse
Jack Layton 32 53 15
Gilles Deceppe 17 66 17
Paul Martin 15 43 42
Stephen Harper 14 45 41

Question: If you had your way, would you like to see the Liberals, the Conservatives, the NDP and in Quebec, the Bloc Quebecois keep or replace their leaders?

SOURCE: THE STRATEGIC COUNSEL
Posted by EUGENE PLAWIUK at 10:08 AM