The Real Debt and Deficit Crisis 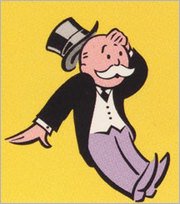 Cash-strapped Canadian families are racking up debt at an alarming rate and the record number of households declaring bankruptcy will continue to rise unless people tighten their belts now, a new report warns.

"The alarm bells are ringing louder than ever," says the Vanier Institute for the Family, in a report on the state of family finances in Canada released on the weekend.

"On average, households are putting nothing away for a rainy day, for a bout of unemployment, or for retirement," the report says.

The real hourly earnings of Canadians have increased by just a dime over the past decade and a half, the report says.

The marginal 10-cent-an-hour-after-inflation increase in hourly earnings since 1990 has been accompanied by fewer hours of work, says the respected social policy think-tank.

"As such, more members of cash-strapped families are stepping into the growing paid-labour market," it says.

While that has produced record levels of employment and dual-income families, their disposable income, after taxes and government benefits, has stagnated over the last five years.

With the booming real estate market and interest rates at historically low levels, Canadians have reduced their savings and taken on more debt, it notes.

The days of cheap debt, however, are coming to an end, it says, predicting interest rates will continue to rise over the short term at least.

Total debt per household is now equal to 125 per cent of disposable incomes, up from 91 per cent in 1990, an increase that has helped push insolvencies to record levels and will continue to do so.

And nothing the new Conservative government will address this crisis. All they have offered is tax credits to the rich and an inadequate baby bonus. Tax credits do not put real money in your pocket, as ING would say. In fact they only help those who pay taxes, and result not in a lower pay cheque per se but as a balance against earnings on your annual income taxes. Instead a tax cut on those earning under $100,000 would put real money back in your paycheque.

Unfortunately those tax cuts implemented by the Liberals before the election are going to be killed by the Conservtive government in order to pay off its GST promise. Once again helping the rich who are the only ones who really benefit from a GST cut, since it really only appears as a cost savings on big ticket items, like cars and other luxury goods.

Storm Clouds Over The US Economy

The Wit and Wisdom of Warren Buffet

"Just as stocks rise when workers are laid, so does an economy boom when driven not by production but by consumer debt."

Is this some kind of new investment strategy you've discovered? Or perhaps this has something to do with your support of LSIF's ;)

We're in agreement on this being the elephant in the room when it comes to our economy. The growth in personal debt is just scary and yet, when you hear about the reports, it always has a big six bank economist spinning it as no big deal. The latest excuse has been how housing values are outpacing debt levels so we're actually ahead of the game. Thank goodness for the banks! As long as we have our $300,000 mortgages in addition to our $50,000 line of credit and $20,000 visa balances in their hands, we'll all be just fine....that is until prime hits 6% when they'll yank everything out from underneath us quicker that you can say insolvency.