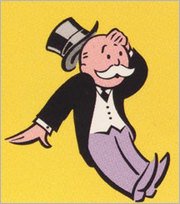 Those darlings of Monopoly the Irving Family Compact are in another battle with the Citizens of New Brunswick as this blog documents. I have written here about their infamous paternalistic capitalism.

Now they want to set up a Liquified Natural Gas, LNG, terminal on the island and then set up a pipeline to ship the gas south to the USA. Ironically their deal which is with Repsol, the Spanish oil giant, is about delivering Bolivian gas into the U.S.

While Bolivia has yet to deal with Repsol on new terms for purchasing the peoples resources in that country. Repsol is accused of not paying duty on 230,000 barrels of crude oil valued at some €7.5 million.

Premier Bernard Lord's Conservative government introduced legislation Wednesday that will clear the way for the city of Saint John to grant a special property-tax rate for Irving Oil and Repsol YPF, S.A., its Spanish partner in the LNG project.

The proposed rate is a fraction of what the property taxes would be normally.

''We're doing this on behalf of the city of Saint John for the LNG terminal,'' said Local Government Minister Brenda Fowlie.

''They felt they needed to do this in order to make sure the facility did come to New Brunswick and to the Saint John area specifically.''

The city of Saint John has voted to give Irving Oil, owner and operator of Canada's largest oil refinery, a fixed property-tax rate of C$500,000 per year for the terminal for the next 25 years. Irving Oil Gets Clearance for Major Tax Break

Where-ever LNG is delivered by tankers concerns are raised about safety; Coast Guard has safety concerns about LNG terminal plans and of course the environment.

LNG is supercooled liquefied gas that is shipped from far-flung countries -- Iran, Qatar, Russia and Indonesia are major suppliers -- to coastline terminals, where it is heated, vaporized and fed into a pipeline. Sempra and other companies are convinced that LNG is key to keeping a lid on gas prices in the United States as domestic supplies dwindle.

The rub: Many coastal communities don't want massive fuel tankers hogging their shores. Regulators approved five new LNG terminals in Texas and three in Louisiana, but companies have struggled to find a home outside the Gulf of Mexico, particularly in California and New England.

That's not to say that all Mexicans welcome LNG either. Lobster fishermen and the owner of a neighboring resort say Sempra's hulking plant threatens business. Surfers say a phenomenal surfing spot was destroyed after the San Diego-based company began construction in March.

Environmentalists have waged a spirited -- and so far unsuccessful -- campaign to derail Sempra, regularly blocking traffic at the plant entrance and bringing activists from around the world to rally local opposition. They sued the California Public Utilities Commission in state court last year to force the regulator to reconsider a ruling that cleared the way for Sempra to pipe gas from the plant to the U.S. grid near Tecate, Calif. West Coast's first LNG terminal finds a home in Mexico

As usual for the Irvings they are demanding tax breaks from St. Johns NB for their business of setting up the LNG terminals and pipelines. And they are asking the Volk to pay for the destruction of their tourist industry to benefit the greedy family compact that is the Irvings.New Brunswick town hopes to stop LNG tankers

Saint John city councillor Glen Tait is dismayed at the pressure tactics used by Irving Oil Ltd. to extract a long-term municipal tax break for its latest megaproject. In his view, it's a form of blackmail. "They're big enough to come down with a hammer," says Mr. Tait, describing the ultimatum that forced city council to ram through a 25-year tax deal for Irving's $750-million liquefied natural gas terminal -- or risk losing the project for Saint John.

While in St. Johns citizens were told they had to give the Irvings a tax break so they can run the LNG pipeline through a public park! Protests are now growing around saving the park from the Irvings.

The provincial and municipal tax breaks, meaning citizen funding, gives the Irvings extra cash to invest in Ireland!. The artistocratic gaul of the Irvings knows no bounds.

Besides the Saint John oil refinery, Canada's largest, Irving Oil owns and operates more than 500 convenience stores in eastern Canada and New England primarily under the brand Bluecanoe. It has also partnered with Repsol YPF, the largest private energy company in Latin America, to develop an liquified natural gas terminal in the Port City, according to the report.

Alhajji said in the report Irving's dominance in the downstream oil industry makes it perfectly suited to jump into Ireland's market.

"They are suited to take over, basically, because they are focused to serving the consumer at the end," he told CanadaEast.com.

Bill Simpkins, an energy industry consultant in Halifax, said in the report that convenience stores are profitable operations for oil companies. The market for quick to-go foods and beverages can be quite lucrative.

"I think overall the Irving companies are very astute in terms of where they invest," he said.

WHAT ISLAND ARE YOU TALKING ABOUT? Saint John NB. is not an island Saint John's NFLD is ! Also Saint John NB is a city not a town .PLEASE TRY TO GET YOUR FACTS AND YOUR GEOGRAPHY RIGHT!We thank you for running the article and trying to help, we need all the help that we can get,but...... it looks beter if the facts are correct,other wise , we lose credit.Thanks again !

YOU ARE CORRECT I STAND CORRECTED