All In A Day 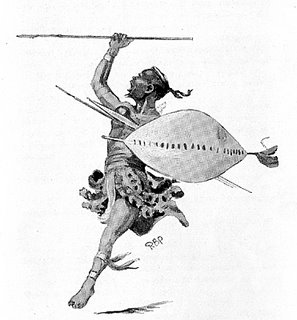 Something is faster than a Federal Cabinet Minister putting his foot in his mouth then taking it out and shooting it.

His communications staff destroying the public evidence on his webpage.

In this case Stockwell Day. Who said, in print, (so the truth its out there) the racist slur; Spear-Chucker.

And sure enough there it is in print.

Aaaaanyway, it appears that local libs now send bits and pieces of my local columns to their favourite spear-chuckers down east who are quick to unleash a volley of indignation, which makes for good fodder back here at home.

Is Kate and the SDA bunch upset at Stock for his “spear-chucker” comment? asks Scott Tribe. Nope .

Like Kate mostof the Blogging Tories are ignoring it and of course there are rightwingnutbars who defend Stockwell.

But it gets better. Perhaps the reason Kate and other BT are not saying anything is because they could find; "No Evidence for the comment."

You see it disappeared from Stockwells web page. My goodness everything has. As Macleans pointed out. Suddenly there are no postings for 2006 yet they were there a week ago when I found this there.

It appears the PMO has 'communicated' with Day's staff.....

Public Safety Minister Stockwell Day was ordered to remove an embarrassing comical commentary that ridiculed the science behind global warming from his personal website to avoid embarrassing his government about its real views on climate change, critics said Wednesday.

By order of the Autark himself no dout after all Harper spent summer reading a biography on Stalin.

Say this is reminicent of the Stalin School of Falsification, now you see it now you don't. In this case this is the last web page of article comments left by the Stock. But it links to nothing, abandoned in cyberspace the last fingerprint that Stock had posted anything this year.

But the offending article, along with all other commentary posted by Day since he became a cabinet minister were removed from the site by the end of the week.

Officials at Day's office had no explanation.

''Were they (articles) there before?'' wrote Melisa Leclerc, Day's director of communications, in an e-mail. ''I hadn't noticed.''

But of course he had, every time he did he said something quotable, that is something stupid, it was posted on his home page. Now poof its all gone.

She hadn't noticed sheesh, lie a little. Spin some more. I really think it had less to do with the climate remarks than the use of the term Spear-Chucker in his latest missive. Which was Day commenting on the comments raised over his climate change article. In this article they quote from his column but not about his use of Spear-Chucker. 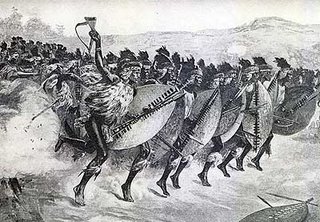 You see his website changed the day the Spear-Chucker column ran. Opps. Can you say Cover Up.

There are those who would attempt to dismiss his use of the phrase, Spear-Chucker as not being racist, really, no not racist, not from the red neck white boy from interior B.C., old Socred country.

The polical Home of Wacky Bennett is now home to Wacky Day.

Spear-Chucker here means what it means; the troops, the grunts, the gophers, the nmasses. Waves of the masses.

Waves of Spear-Chuckers, wave upon wave, the waves of Zulu overwhelming her majesty's Imperial Army.

Stockwell , being the erudite latte sucking intellectual he is, was making a historical reference to major British defeats in South Africa,to end in a pyrrhic victory by the British. 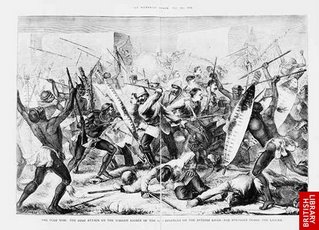 Harsher views see the redcoat effort as dangerously cavalier and bumbling, epitomized by the infamous but apochryphal belief that ammunition boxes could not be opened at Isandhlwana - they could be kicked open! Critics also claim that the British fatally divided their forces, enabling the Zulu to concentrate on each invading column in turn. That a modern army with rifles and artillery could not make short work of the illiterate native host is seen as proof of reckless underestimation of the enemy and slipshod preparation.

To be followed by their ultimate defeat at the hands of their once erstwhile allies the Boers. A war that marked the first time Canada sent military and Mounted Police troops overseas to fight for the Empire.

So the British Imperialists turned defeat into victory by changing the term Spear-Chucker from one of horror, terror, and certain death to one of derision; backwardness, primitivism.

So yes Martha, Stockwell Day did use a racist slur in print. Unlike Republican George Allen who only got YouTubed saying Maccaca. Stockwells slur is still in print and on the web. Even if its not on his homepage.

At least he didn't use the other favorite South African racial slur; Kaffir. Though someone might have dismissed that as being just another Boy Scout term.

Well it's not as if Stock has a long history of promoting hatred and associating with bigots or anything.

Ah yes Cliff, the insenstive slam on an entire town with no evidence to support a single theory or claim. And they say the left just doesn't have the wide-scoped hatred of all plebes anymore.

FCLC Huh what are you taliking about, I know its close to Christmas but drinking this early in the day shame on you. The left is the plebs you moron. It's the right wing effette intellecshuals like yourself that go to univeristy and read Ayn Rand that are out of touch.

And neither I nor the articles I linked to slam a whole town - I'm not suggesting ala Hedy Fry that crosses are burning as we speak in rural Alberta - I'm FROM rural Alberta.

I'm slamming Stock for, among other things associating with unambiguous hate-mongers like Keegstra, promoting and defending a private school curriculum that described Jews as the childern of the devil (Interesting isn't it, that right-wingers only get passionate about anti-semitism when they think it's left-wingers expressing it?) and now using terms like 'spear-chucker'.

So FCLC have you published an apology to Maher Arar and his family on your blog yet? As I recall you were convinced he was guilty because he looked 'shifty' and 'a lot like Iran's President'.

Of course I must be remembering wrong because that would sound an awful lot like an 'insenstive slam on an entire group, Muslims in this case, with no evidence to support a single theory or claim'.

And you would never do that right?

It's not like you would also write sneering hate pieces about all 'sodomites and sapphists' - that would be some other blog I've held my nose to peruse, right?

You know maybe you should remember that your comments link back to your blog before accusing others of bigotry - just a thought.