The Problem Is Pagans

Republican Spinmeister; "Bay" Buchanan blurted out her secret fear, the ultimate conspiracy theory, the problem with the Belt-way was all the Pagans in Congress 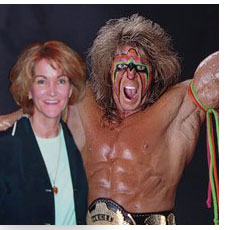 BEGALA: So, Carville is a Catholic. Ellison is a Muslim. And they were both in a synagogue at the same time. That is America.

BUCHANAN: Keith Ellison got -- actually received the endorsement of a Jewish newspaper.

I mean, this is a man that ran on a certain platform. He gathered people from all different faiths to support him. And he has every possible reason in this great country to represent that district.
His religion, to me, is a strength, his strength. I mean, I will tell you what I'm far more concerned about in Congress, is -- than a Muslim, is the pagans we have up there.

BUCHANAN: I think they are a greater threat to us than anyone who has some religious beliefs.

Pagans in Congress? Heck the right wing mudpuppies are upset over a Democrat Congressman wanting to swear his oath of office on the Koran. Pagans, sheesh, America is not that liberal.

Of course saying something completely outrageous and untrue sounds better if you also make it outlandish. I am not sure what she was getting at with her us and them designation of Congress, but maybe if she said "believers and unbelievers: she would come under scrutiny of Homeland Security.

Or if she accussed Congress of being full of atheists, well that would have been laughed off, not an athiest among them, they make sure we all know that.

Nope pagans it is. And of course coming from a Catholic we all know what that means; any one who is not a Papist. Glad to know she didn't really mean Pagans just Non-Catholics. 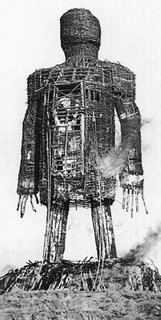 I was suddenly envisioning the new Congress making Halloween and May Day sacred holy days on par with Christmas, and bringing back the Wicker Man for George W. Bush.


Instead being in a Yuletide mood of joy and giving I recommend someone sit Bay down and make her listen to Dar Williams; The Christians and the Pagans.


Amber called her uncle, said "We're up here for the holiday,
Jane and I were having Solstice, now we need a place to stay."
And her Christ-loving uncle watched his wife hang Mary on a tree,
He watched his son hang candy canes all made with red dye number three.
He told his niece, "It's Christmas Eve, I know our life is not your style,"
She said, "Christmas is like Solstice, and we miss you and its been awhile,"

So the Christians and the Pagans sat together at the table,
Finding faith and common ground the best that they were able,
And just before the meal was served, hands were held and prayers were said,
Sending hope for peace on earth to all their gods and goddesses.

The food was great, the tree plugged in, the meal had gone without a hitch,
Till Timmy turned to Amber and said, "Is it true that you're a witch?"
His mom jumped up and said, "The pies are burning," and she hit the kitchen,
And it was Jane who spoke, she said, "It's true, your cousin's not a Christian,"
"But we love trees, we love the snow, the friends we have, the world we share,
And you find magic from your God, and we find magic everywhere."

So the Christians and the Pagans sat together at the table,
Finding faith and common ground the best that they were able,
And where does magic come from? I think magic's in the learning,
'Cause now when Christians sit with Pagans only pumpkin pies are burning.

When Amber tried to do the dishes, her aunt said, "Really, no, don't bother."
Amber's uncle saw how Amber looked like Tim and like her father.
He thought about his brother, how they hadn't spoken in a year,
He thought he'd call him up and say, "It's Christmas and your daughter's here."
He thought of fathers, sons and brothers, saw his own son tug his sleeve, saying,
"Can I be a Pagan?" Dad said, "We'll discuss it when they leave."

So the Christians and the Pagans sat together at the table,
Finding faith and common ground the best that they were able,
Lighting trees in darkness, learning new ways from the old, and
Making sense of history and drawing warmth out of the cold.

Yep, that should clear things up for her. Since we share a common ethic.

Pagans in Congress what a fantasy.

If that were to occur you would have a government of true federalism, and natural justice. For a century and a half, the artists and intellectuals of Europe have scorned
the bourgeoisie. And for a millennium and a half, the philosophers and theologians of Europe have scorned the marketplace. The bourgeois life, capitalism, Mencken’s “booboisie” and David Brooks’s “bobos”—all have been, and still are, framed as being responsible for everything from financial to moral poverty, world wars, and spiritual desuetude. Countering these centuries of assumptions and unexamined thinking is Deirdre McCloskey’s The Bourgeois Virtues, a magnum opus that offers a radical view: capitalism is good for us.

McCloskey’s sweeping, charming, and even humorous survey of ethical thought and economic realities—from Plato to Barbara Ehrenreich—overturns every assumption we have about being bourgeois. Can you be virtuous and bourgeois? Do markets improve ethics? Has capitalism made us better as well as richer? Yes, yes, and yes, argues McCloskey, who takes on centuries of capitalism’s critics with her erudition and sheer scope of knowledge. Applying a new tradition of “virtue ethics” to our lives in modern economies, she affirms American capitalism without ignoring its faults and celebrates the bourgeois lives we actually live, without supposing that they must be lives without ethical foundations.

High Noon, Kant, Bill Murray, the modern novel, van Gogh, and of course economics and the economy all come into play in a book that can only be described as a monumental project and a life’s work. The Bourgeois Virtues is nothing less than a dazzling reinterpretation of Western intellectual history, a dead-serious reply to the critics of capitalism—and a surprising page-turner.

Towards Embodied Justice: Wrestling with Legal Ethics in the Age of the 'New Corporatism'

[This article considers what feminist ethics might be able to offer public law and challenges the idea of ‘public’ law when strategically invoked by private interests. The article argues that ostensibly neutral phenomena, such as the public law–private law distinction, norms of universality and adversarialism are key technologies of power that facilitate the ‘new corporatism’. It is suggested that ‘care’, which is commonly assumed to be a corollary of feminist ethics, is problematic because it is associated with what is termed the ‘fictive feminine’, an impoverished notion of femininity within the popular imagination. An ethical feminist consciousness can nevertheless contribute to a new vision of justice by incorporating the perspective of the ‘other’, which involves effecting a dialogue between the universal and the particular.]

Pagan Virtue: An Essay in Ethics by John Casey at Questia Online ...

Man as person is absolutely free to choose his
destiny, his values, even his nature. His existence as a person, and
hence as a moral being, is not determined by something called
'human nature'. Morality must be concerned with man in his
freedom, and the moral law is the law of freedom. Ideas such as
these we can associate with Spinoza, Kant, and Sartre. Kant argued
that since the moral law must apply to all rational beings generally,
then it must apply to man simply as a rational being. No truly
moral command could be based on man's 'empirical' nature -- upon
particular desires, strengths, or skills.

In fact, the concept of a person, and its consequences for values,
is a focus of ideological disagreement. 'There is neither Jew nor
Greek, there is neither bond nor free, there is neither male nor
female: for ye are all . . .' 5 persons. To insist that someone is above
all a person is to insist that all these other characters he may have
are irrelevant to that distinct pattern of response that is appropriate
to rational beings. To say that someone's colour, or sex, or caste is
irrelevant to his personhood is usually to say that it is inappropriate
or wrong to withdraw certain sorts of consideration from him
because of these features or accidents of birth, or to accord certain
sorts of consideration to him because of them.

This book presents the author's reflections on the "pagan" cardinal virtues of courage, temperance, justice, and practical wisdom (phronesis) as depicted by Aristotle in the Nicomachean Ethics. Casey sees these virtues as pagan because they "are undeniably worldly . . . , include an element of self-regard, and . . . rely on material conditions for their fulfillment" (p. viii). Christian virtue, by contrast, centers on the next world, emphasizes humility, and is independent of the vagaries of fortune because it depends (as Kant articulates in the Grundlegung) ...

The Sense of the Past:
Essays in the History of Philosophy

Bernard Williams
Edited and with an introduction by Myles Burnyeat

Bernard Williams' insistence that morality is about people and their real lives, and that acting out of self-interest and even selfishness are not contrary to moral action, is illustrated in his "internal reasons for action" argument, part of what philosophers call the "internal/external reasons" debate.

Philosophers have tried to argue that moral agents can have "external reasons" for performing a moral act; that is, they are able to act for reasons external to their inner mental states. Williams argued that this is meaningless. For something to be a "reason to act," it must be magnetic; that is, it must move us to action. How can something entirely external to us – for example, the proposition that X is good – be magnetic? By what process can something external to us move us to act?

Williams argued that it cannot. Cognition is not magnetic. Knowing and feeling are quite separate, and a person must feel before they are moved to act. Reasons for action are always internal, he argued. If I feel moved to do X (for example, to do something good), it is because I want to. I may want to do the right thing for a number of reasons. For example, I may have been brought up to believe that X is good and may wish to act in accordance with my upbringing; or I may want to look good in someone else's eyes; or perhaps I fear the disapproval of my community. The reasons can be complex, but they are always internal and they always boil down to desire.

With this argument, Williams left moral philosophy with the notion that a person's moral reasons must be rooted in his desires to act morally, desires that might, at any given moment, in any given person, be absent. In a secular humanist tradition, with no appeal to God or any external moral authority, Williams' theory strikes at the foundation of conventional morality; namely, that people sometimes do good even when they don't want to.