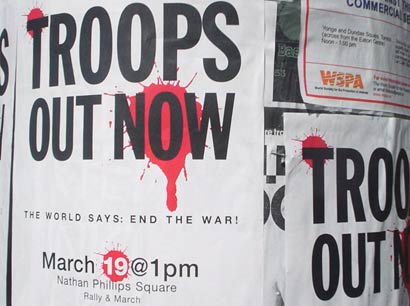 Of course it is hard for the Nationalist Left to accept that Canada is an Imperialist country. They have lived the lie that we are hewers of wood and drawers of water first for the English then the Americans for so long that they fail to see Canada as a capitalist state rather than a colony.

The reality is that Canada pushed the FTA and NAFTA, APEC and the WTO agreements, as it is also pushing CAFTA in order to outmanuver American capitalist interests. It is also why the government approved Canadian forces being active in the Kosovo conflict, in Haiti and now Afghanistan. For an interesting article on this, check out:

In Defence of Marxism - Troops Out of Afghanistan! - Canadian Imperialism comes of age

Lenin explained that Imperialism is fundamentally an economic relationship characterized by the export of capital and the control of foreign markets (through military or other means).

By this definition, Canada is clearly an imperialist country, with imperialist finance capital, an imperialist military, and an imperialist foreign policy seeking to defend Canadian capital abroad. People who present Canada as a weak oppressed nation are merely deluding themselves or are acting as apologists for the disguised predatory policy of Canadian Imperialism.

The corporate media likes to present the idea that Canadians are internationally viewed as peacekeepers. This is meant for consumption at home as a smokescreen for Canada’s foreign policy. Interestingly, the real impression of Canada abroad, in the rare event that people think of Canada, is that of little brother to the USA. This view is far closer to reality than most realize. The military, and their industrial backers, enjoy complaining about low military spending. In fact, Canada is the 7th highest spender amongst 26 NATO countries and spent almost $15-billion in 2005 (Polaris Institute, 2005). Militarists complain that this spending is relatively low in relation to GDP. However, a 2005 Polaris Institute report titled “It’s Never Enough: Canada’s alarming rise in military spending,” details how the 2005 budget plans a 34% increase in annual spending to almost $20-billion by 2010. During the last election, the Conservatives promised to top this up by an additional $5.3-billion over 5 years. To put this into context, for the price of a single military helicopter the Government could construct 1000 homeless shelters. Much of the new spending is earmarked for making the Canadian military “interoperable” with their US counterparts. The aim behind this is to support US Imperialism overseas. The report continues: “Transforming the Canadian Forces into a military that is capable of rapidly deploying soldiers, warships, aircraft and equipment has become the pre-eminent priority for the Department of National Defence. Whether it is weapons management systems for warships, or laser-guided bombs for CF-18s, these programs are intended to ensure that the Canadian Forces stand ready and able to fight with, or for, the United States.”

There has also been a shift in the deployment of Canadian military. 21st century Canada does almost no “peacekeeping,” defined as lightly armed observers monitoring a negotiated ceasefire. At the start of 2006, only 217 Canadian soldiers were active in UN “blue hat” missions, down from 4000 in 1992-3. Reformists, and even some who call themselves Communists, bemoan Canada’s lack of UN participation. However, Canadian Imperialism is merely recognizing reality. In the past, the UN could barter issues between the minor powers but was essentially a club for enforcing the common aims of the imperialist powers. But since the fall of Stalinism, the UN has become increasingly irrelevant and the United States is even more free to act with impunity. It is folly to believe that the might of US Imperialism, with 40% of world military production, can be tempered by appealing to the lesser imperialist powers. The only force capable of standing up to Imperialism is the world working class. We must rely on our own methods and our own forces. From Vietnam, to Iraq, to Latin America, we have seen that the only way that Imperialism has ever been defeated is by the mass of the poor.