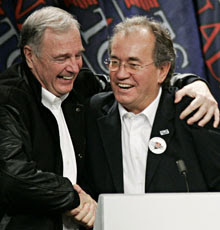 So as Chrysler Canada announces two thousand job cuts, the PM refuses to meet or take phone calls from Buzz Hargrove, President of the CAW.

Hargrove expressed disappointment that Prime Minister Stephen Harper didn't find some time to meet with him Thursday, especially given the dire circumstances in the auto sector. The prime minister's officials said they had no record of a request from Hargrove to meet.

Gee thats strange since Buzz called, left messages, was in Ottawa, and the NDP and Liberals knew he wanted to meet with Harper. Both parties raised Harpers refusal to meet with Buzz during question period.

Mr. Speaker, with massive layoffs pending at Chrysler, why has the government cancelled labour market partnership agreements that could have helped many of the 2,000 Chrysler workers and why is this Prime Minister, the first in 40 years, refusing to meet with the head of the CAW?
Hon. Monte Solberg (Minister of Human Resources and Social Development, CPC):

Mr. Speaker, the member should know that the government announced its intentions to strengthen labour market initiatives in “Advantage Canada”. We are in constant contact with our provincial partners on all of these issues.
We will certainly put in place all the measures necessary to ensure that we have the strongest possible economy, something that is already happening under the leadership of the Prime Minister.
Hon. Scott Brison (Kings—Hants, Lib.):

Mr. Speaker, we have a minister who is laissez-faire and a Prime Minister who does not care.
The Liberal government partnered with the auto industry to create thousands of new jobs. Canada's neo-Conservative government has done almost nothing and we are losing thousands of auto workers jobs.
Will the Prime Minister meet with the head of the CAW, take action, and reintroduce the previous government's auto strategy that was working and creating jobs here in Canada?

Mr. Speaker, I would remind my hon. colleague that we tabled the Advantage Canada plan, a plan that will enable the automobile industry and all other industries to enjoy competitive tax conditions.
We will continue to lower taxes, to limit paperwork and regulations interfering with the productivity of Canadian business in the automobile sector, and we are proud of what we are doing.

Prime Minister Stephen Harper says the looming job losses at Chrysler have nothing to do with federal government policy.

Except that Canada is negotiating a bilateral trade deal with Korea, home of Hyundai.

And considering that Buzz and Stephen agree on the need to go slow on emission regulations you would think Harper would take a call from Hargrove.

No sooner had Buzz said that then this happened.

And suddenly Buzz is doing as I have said Canada's labour movement would have to do, accept the global market and demand Fair Trade agreements.

Mr. Speaker, today's news that Chrysler is going to eliminate 2,000 jobs in Canada makes it very clear that we have to get down to helping out our auto industry. Consumers want fuel efficient cars, but the government stands by and does absolutely nothing about it.
That is why the NDP put forward a green car strategy in 2003, supported by Greenpeace and the CAW. Too bad the Liberals would not adopt it because it would have transformed our industry and we would have been in the forefront of protecting jobs and creating new jobs as well.
Does the Prime Minister not understand that when it comes to building green cars, either we get it done or China, Japan and Korea will do it?
Right Hon. Stephen Harper (Prime Minister, CPC):

Mr. Speaker, while we are obviously concerned by the announcements that we expect from Chrysler, this is a global company that is making global decisions. These are not related to policies in our country, as the member well knows. At the same time, we have seen a growth in other parts of the auto industry.
I appreciate some of the suggestions the leader of the NDP has made. They are much more positive than the motion tabled last week by the Leader of the Opposition, which would effectively propose that we cut emissions from the auto sector, from all sectors, by one-third in the next four and a half years. I wonder if he has any idea how that would devastate the Canadian auto sector.
Hon. Jack Layton (Toronto—Danforth, NDP):

Mr. Speaker, the Prime Minister is wrong about the impact of his own actions. The workers in the auto sector are worried and rightly so. Their jobs are on the line. As people look for more efficient cars, they will not find them manufactured here because there has been no action.
The government says that it is a global marketplace, that the market will take care of it, but the market is not fair. Those other countries can sell their cars in Canada without limit, but we cannot sell good Canadian cars, built right here, to countries like China, Korea and Japan.
Is that why the Prime Minister thinks it is a good idea to sign a free trade deal, signing away our auto industry to Korea?
Right Hon. Stephen Harper (Prime Minister, CPC):

Mr. Speaker, the government has been pursuing negotiations with South Korea and with others for the express purpose of opening up Asian markets to Canadian products. I am glad to see that Buzz Hargrove seems to have completely reversed himself and now suggests that is exactly what we should be doing, trying to open Asian markets. The government will work hard with the industry to do that.
The government has ongoing consultations with the energy sector. There are some happening this very day. We think it is important to consult with industry before telling it to simply slash one-third of its production, as the opposition would.

Ouch! Of course that is not what Buzz is saying, but that's the spin the Free Traders will make over Fair Trade. Until the labour movement and its political allies spell out the difference.

What we need is a national industrial ecology strategy, not just tax cuts and credits for the industry. And that does not mean that industries in Canada have to be Canadian owned either. Sovereignty is not determined by corporate ownership but by the working class, having autonomous Canadian unions, and eventually in joint ownership of industry in Canada.

As recent negotiations with CAW and Falconbridge's new owners Xstrata PLC have shown.

Each of the past three bargaining rounds between the Canadian Auto Workers and previous owner Falconbridge Ltd. were marred by bitter confrontations and each ended in dispute. Workers were off the job in 1997, 2000 and in 2004.

Things were so bad, that after members voted to end a particularly acrimonious seven-month strike in February, 2001, the CAW was still hurling public insults at Falconbridge's front office.

"The previous owners seemed willing to spend a million dollars to save a dime. These people, the new owners, seem to recognize the value of a dime. That's different. It's going to require us to adjust our style as well. So we've made a commitment to try to work on the relationship over the life of the agreement and that was part of our settlement. How do we communicate better and how do we get things done in a positive way?" Mr. Mitic said.

Eugene - excellent post. I wonder if Buzz hears who was going to bat for the caw. And I hope he realizes that fair trade is better than handouts to the corp which didn't actually save jobs.

Poor Senator Basil. He's finding out payback's a bitch. Harper remembers what he did in the last election & now he's leaving Basil to twist in the wind. A lesson to all uppity, self-intersted union bosses not to piss off those who are in a position to help you out.

But Buzz agreed with Harper on Kyoto and so to use a couple of cliches he is cutting his nose to spite his face by not meeting with Buzz and he failed to practice virtuous realpolitik of keeping your friends close and your enemies closer. But then he again is a Stalinist.