Gee it's hard to be a law and order government when the official state police force is riddled with corruption, cronyism and fraud.

Those who uphold the law once again act as if they are above the law.

Which suits the Harpocrites just fine since they are acting the same way. 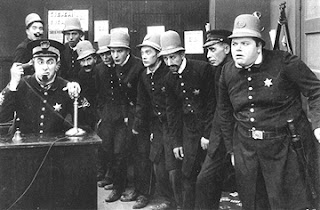 a parliamentary committee reviews allegations of pension-fund fraud, cronyism, and three years of expense reports of former RCMP commissioner Giuliano Zaccardelli that were either swapped out or disappeared by his underlings, his successor, Bev Busson retires today. The planned departure comes only hours after the report of lawyer and Bay Street minence grise David Brown delivered a report on the force's corruption to Public Safety minister Stockwell Day. The RCMP, Mr. Brown declared, is "horribly broken."

Like other political police forces; the FBI and KGB for instance the RCMP have maintained their traditional para-military structure through political blackmail.

"I've worked with Liberals and Tories, and nobody wants to tangle with the RCMP," said Shirley Heafey, the former chair of the force's commission of public complaints.

"They have a lot of information on a lot of people ... It causes a chill. They have long memories in the RCMP." 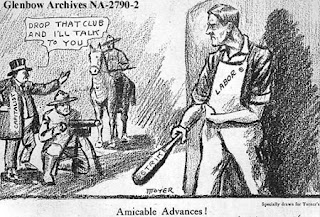 And so do we on the left. We remember their infiltration of the left, their penchant for protecting strikebreakers and shooting strikers, their attack on the On to Ottawa Trekkers, their role in the Liberals attempt to discredit their opponents in particular the Quebec nationalists, their systemic refusal to deal with members of the force who abuse natives and prisoners, their role in the Arar affair and the Air India debacle, the list could go on and on.

After all the RCMP Motto is Maintain the Right.

The solution to the problem of the RCMP is three fold; implementation of the recommendations of thirty year old Macdonald Commission including; a non RCMP Commissioner, civilian control and oversight and allowing the rank and file to unionize.

Others call on Ottawa to break up the RCMP's mandate, which they believe is unwieldy. While it has many federal responsibilities whose powers range from protecting the borders against drug-smuggling, enforcing stock markets against fraud and investigating politicians, the RCMP's bread-and-butter is the contracts it has with provincial and municipal governments.

These contractual arrangements harken back to the RCMP's roots as a guns-for-hire protection and enforcement group, said Paul Palango, investigative reporter and author of The Last Guardians, a book on problems within the RCMP, calling them essentially a paramilitary force working at the behest of their hosts.

The force, he said, has turned into a hybrid organization that is both a business and a national institution. 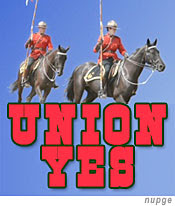 Why The Tories Want Tory Judges

Paranoia and the Security State

Posted by EUGENE PLAWIUK at 6:57 AM