A debate yesterday on Mike Duffy live between the advocate of a ban on seal hunting, and a Senator from the Rock (Newfoundland).

No matter how often the Senator tried to convince Duff and the anti-sealing advocate that clubbing baby seals does not happen, it was blissfully ignored. The hunt is not for babies. Killing baby harp seals has been illegal since 1987.

Yep never let the 'facts' get in the way of propaganda, since of course this IS NOT ABOUT SEALS. Its about the annual fundraising drive for Green NGO's. How many times do I have to say this?

Well until the deaf grow ears I guess. Besides think of all that Green Anti-Sealing propaganda that would have to be changed. Yet you still see this everywhere;

Which is a baby seal. Not a Harp seal, a white coat. And the hunt on them has been banned since 1987, and skinning seals alive, which is another piece of this propaganda, is also banned.

And this is the image of the hunt that is still used by those who want to foist their morality on fishers on the Rock.

Of course with the usual stars arriving on the ice flows to continue the propaganda campaign, like the McCartney's and Bridgette Bardot, folks on the Rock are getting a bit upset. Not only Senators and the Premier but ordinary bloggers. Which leads some of them to start their own campaigns. Like this one; 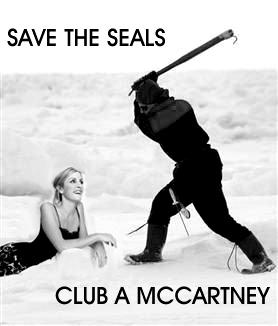 No matter how often the Senator tried to convince Duff and the anti-sealing advocate that clubbing baby seals does not happen, it was blissfully ignored. The hunt is not for babies. Killing baby harp seals has been illegal since 1987.

Sorry, but this is disinformation too. Harp seals lose their whitecoats beginning when they're 12 days old and most of the seals harvested are a mere 25 days old. They're still babies.
http://www.pulse24.com/News/Top_Story/20060316-012/page.asp

From the site you linked to that has the myths and realities about seal hunting.

8. How old must harp and hooded seals be before hunters can
take them?

Harp seals can be legally hunted once they have moulted their white coat, which occurs at about 12-14 days of age. However, they are not usually hunted until they reach the "beater" stage of development at around 25 days old.
http://www.dfo-mpo.gc.ca/seal-phoque/faq_e.htm

This is nothing more than a semantics game by people trying to claim that only whitecoats are baby seals.

the mcdonald chicken burger,kfc,wendys,etc. are made of chicken less then 3 months old.so does that not also make them baby chickens?
700 million baby chicken die for KFC every year.

Robert my point is that Seals are NOT endangered. That the propaganda used by the Green moralists is for emotional purposes, not rational. Which leads to this kind of crap; Thank You Paul McCartney

Why do people think that a traditional form of hunting (in which the skin, meat, fat and oil are used) is cruel, while industrialized livestock farming is normal? Is it more cruel to kill a wild animal quickly, or to confine an animal to a factory environment for its entire life?

Personally, I think the seal hunt is like any other type of hunt, be it cattle, chicken, pig, etc. No killing is pretty. But seals are cute, and pristine white ice flows make a much better photo-op - really shows off the blood nicely.


Many people do not research the seal hunt before forming their opinion; they simply believe what activist groups tell them. Here is some independent (non-activist, non-government) research about the seal hunt:

Independent Veterinarians Working Group, Improving Humane Practice in the Canadian Harp Seal Hunt
States that “the Canadian harp seal hunt is professional and highly regulated by comparison with seal hunts in Greenland and the North Atlantic. It has the potential to serve as a model to improve humane practice and reduce seal suffering within the other hunts.”
http://www.ivwg.org/IVWGReportAug2005.pdf


Information about activist groups (from Activist Cash, a project of the U.S.-based Center for Consumer Freedom):

Sea Shepherd Conservation Society
Rams and sinks boats - founder believes that United Nations resolutions authorize him to commit violent acts and was kicked out of Greepeace (which he founded) for his violent tactics - has publicly made racist remarks against U.S. immigrants, Canadians, Scandinavians, Indians, and the Danish.
http://www.activistcash.com/organization_overview.cfm/oid/347

PETA
Supports violent and harassing attacks - in the past ten years, spent four times as much on criminals and their legal defense than it has on shelters, spay-neuter programs, and other efforts that actually help animals - opposed to the use of seeing-eye dogs - opposes life-saving medical animal research, yet from July 1998 through the end of 2003, PETA killed over 10,000 dogs, cats, and other "companion animals" at its headquarters - has compared animal farmers to serial killer (and cannibal) Jeffrey Dahmer - announced with a 2001 billboard that a shark attack on a little boy was "revenge" against humans who had it coming - third-in-command advocates blowing up buildings - head says “Our nonviolent tactics are not as effective”
http://www.activistcash.com/organization_overview.cfm/oid/21

Humane Society of the United States
An animal “rights” (not animal welfare) organization, which aims to completely end the use and ownership of animals (including household pets); opposes life-saving medical animal research; not affiliated with any local humane societies or animal shelters; low scores from charity watchdog groups; was refused entrance to the 16th meeting of the Convention on International Trade in Endangered Species Animals Committee for “filing false accusations about CITES member nations.”
http://www.activistcash.com/organization_overview.cfm/oid/136


And the link that Eugene posted above: Fisheries and Aquaculture Management, Seal Hunt Myths and Realities, addresses the myths of 'just for fur', and the issues of subsidization, whitecoat seals, humane hunting, and the seal hunt's importance to the economy
http://www.dfo-mpo.gc.ca/seal-phoque/myth_e.htm