A new restored version of the famous Russian film Battleship Potemkin by Sergei Eisenstein has been released and will be playing on Turner Classic Movies, TONIGHT for those of you who have either Star Choice of Bell Satellite TV.

If you have never seen this revolutionary movie it is not only revolutionary for it's content but for its approach to cinema. It was the first Docu-Drama ever made, covering the Russian Revolutionary uprising of 1905.

1905 was the year the 2oth Century came into being and it was the birth of modernism which would result in WWI and the Bolshevik Revolution.

Independent filmmakers, restricted to limited exhibition outlets in a world of media conglomeration, can take heart from the fact that Battleship Potemkin, one of the most renowned films in the history of cinema and containing perhaps the best known sequence in the medium's entire history, was initially seen only by small audiences of film society aficionados and trade unionists. In this sense, it represents one of the most successful instances of niche marketing the world has ever seen.

The stories of its circulation are almost as mythical as its subject matter: it was banned as subversive in England and its circulation was highly restricted in the US, even before the implementation of the Hays Code. In the US, it was seen by small groups of filmmakers and critics, and in one enticing account of a screening in the New York apartment of Gloria Swanson, it was projected onto one of Gloria's satin sheets, when the absence of an available screen threatened to disappoint the eager but select audience.

At such a screening, David O. Selznick saw the film and wrote with great enthusiasm to his boss at MGM that a print should be obtained because it would be "very advantageous to have the organisation view it in the same way that a group of artists might study a Rubens or a Raphael". It was, he thought, "unquestionably one of the greatest motion pictures ever made" (this in 1926!) and the firm "might well consider securing the man responsible for it".

Battleship Potemkin is the film which brought Eisenstein, always a citizen of the world, to world attention. This fame both protected him - up to a point - and brought him to the constant attention of the authorities, involving him in a cat and mouse game for his entire professional life.

Although it has become an orthodoxy in the West to emphasise the repressive conditions under which artists, writers and filmmakers worked in the Soviet Union in the 1930s, it is worth remembering that Eisenstein's experiences in the West were equally, if not more, frustrating creatively. Unfruitful episodes in Hollywood & Mexico left Eisenstein back in the Soviet Union with a nervous breakdown and a damaged reputation. 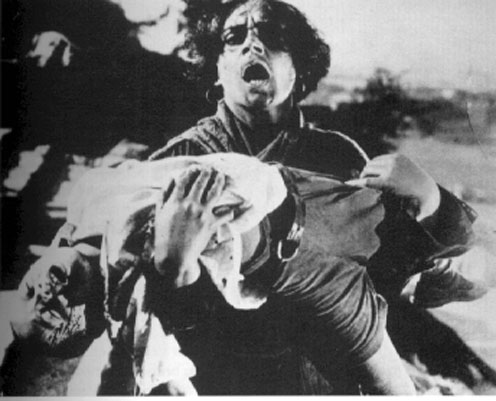 Battleship Potemkin overcomes its ideological constraints and uses its abstract form to produce at least one scene of unquestionable power. Sergei Eisenstein’s own comparison of his style to a "kino-fist" is an apt one; the film assaults the viewer’s sensibilities with forceful melodrama and rhythmic editing. Many scenes are calculated to elicit specific responses and, in fact, succeed, but this creates a certain feeling of manipulation because of the film’s overt polemic. Obviously, political concerns of a now defunct nation from over seventy years ago are not going to hold up well. The fact that the film remains effective on some levels is impressive and testifies to Eisenstein’s influential ideas about cinema. His principles of montage were vital to the development of film language and to cinema’s separation from other art forms into its own realm. A film based largely on these editing principles sacrifices some narrative concerns and tends to distance the viewer if not continuously providing ‘attractions’ or ‘stimuli’. Despite claims mentioned by some critics about the film’s perfect and concise example of film structure, Potemkin can be an uneven viewing experience.

Eisenstein freely admitted the influence of D.W. Griffith’s movies, particularly Intolerance, in his work and in the development of Soviet montage. It is not difficult to see the links between the rapid cutting in that film’s conclusion to the kinetic editing of Potemkin. For example, the numerous cuts in the Odessa steps sequence build the individual moments of terror into an almost unbearable emotional climax. Of course, Eisenstein expanded greatly on montage theory to not only build rhythm or suspense but to form intellectual concepts and associations. The dynamic editing of three lion statues to show the awakening of anger and rebellion is a simple but memorable instance of this metaphorical juxtaposition. Another apparent influence from Griffith would be the melodramatic elements that facilitate the film’s political goals. The tsarist forces are completely evil, and sympathy is evoked for the noble revolutionaries and their supporters; issues and characters are simplified for maximum emotional impact. The officers on the ship are given titles such as, roughly, "I’ll shoot them down like dogs!" when dealing with the disobedient sailors. All of the focused victims of the shocking violence on the Odessa steps are women or children. The idea of typage, casting often non-professional actors based on their physical resemblance to a character type, allows the film to forgo character development and individuality. The ship’s priest looks like a prophet from the pages of the Old Testament transplanted into the 20th Century. Additionally, the absence of a main character, except that of the collective Russian people, corresponds to the Marxist principles of the film; one of the only possible protagonists, Vakulinchuk, dies early in the film for the revolutionary cause. This aspect also is reminiscent of Intolerance’s undermining of audience identification through its large number of characters and shifting focus.

Historical Narrative in The Battleship Potemkin

"What are a few maggots?" asks Richard Hough in his book, The Potemkin Mutiny. He answers with the powerful story of the 1905 mutiny of the sailors of the Potemkin in their struggle against the repressive officers of the Russian Imperial Navy. In 1925, the Soviet government commissioned Sergei Eisenstein to direct a film commemorating the events of the 1905 revolution. Due to time constraints, he had to limit his film to just the Potemkin mutiny. His depiction of these events, in his film The Battleship Potemkin, has many significant differences with the historian's perspective that Hough offers in his book. Contrary to the belief of many modern critics, the actual historical events and details are impossible to determine beyond a reasonable doubt, but "there is no dispute on the main events, and their sequence." However, although Hough and Eisenstein differ, they both offer legitimate perspectives. Even if the events are agreed upon, "one and the same event may be incorporated in a work...in different guises: in the form of a dispassionate statement or in that of a pathetic hymn." Eisenstein is creating a narrative film, and Hough purports to write a history, but both are stories of the event with an intended audience and an intended effect. The small differences between the two perspectives offered by Hough and Eisenstein is significant and colors what the audience thinks of the mutiny and how they identify with it.

The new release of the DVD will be on Tuesday at stores like HMV. If you can't get it locally try Amazon. 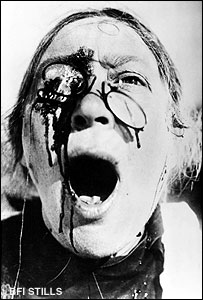 The Pet Shop Boys will unveil their latest project - a soundtrack to the 1925 film Battleship Potemkin - at a free show in London's Trafalgar Square.

The irony is that this propaganda film for the Bolshevik Revolution was made four years after the Kronstadt rebellion occurred against the Bolshevik hegemonic state, by the same sailors.

The naval base of Kronstadt lies on Kotlin Island near the head of the Gulf of Finland. Peter the Great captured the island from the Swedes in 1703 and built it into a naval fortress to protect his new capital. The concentration of heavy armory and sailors on the small island made it a bulwark against foreign invasion, but also a tinderbox in times of internal unrest. During the stormy years 1905-1906 several mutinies broke out on Kronstadt. The sailors were important allies to the Bolsheviks after the February Revolution (1917), when the Kronstadt Soviet opposed the provisional government, declared a "Kronstadt Republic," and took part in the July 1917 mutiny. The famous cruiser Aurora, which had bombarded the Winter Palace on October 25, 1917 with its famous shot heard round the world, belonged to the Baltic Fleet based in Kronstadt.

It was a rude shock to the Bolsheviks when the red sailors of Kronstadt went into open rebellion in March 1921. The sailors saw themselves as loyal to the Soviet cause, if not to the Communist rulers. That bitter winter saw Kronstadt, like most other cities in Russia, hungry and discontented. Anger at material deprivations was compounded by the authoritarian regime the Bolsheviks were building, which seemed to violate the spirit of the revolution that the sailors had helped win. Popular unrest finally grew into strikes, which led to riots, lockouts, arrests. Finally on February 26, local Communist authorities declared martial law. A pattern of sharp protest and response escalated rapidly from here to a state of mutiny.

It is the source of the greatest political division on the left, between anarchists and Trotskyists, even to this day.

Hue and Cry Over Kronstadt By Leon Trotsky

The complete edition of
"Izvestiia of the Provisional Revolutionary Committee of Sailors, Soldiers and Workers of the town of Kronstadt"

Demands of the Kronstadt Insurgents, Expressed in the Resolution of the General Meeting of the Crews of the Ships of the Line

Having heard the report of the representatives of the crews despatched by the General Meeting of the crews from the ships to Petrograd in order to learn the state of affairs in Petrograd, we decided:

The resolutions were adopted by the meeting unanimously, with two abstentions.

Ennio Morricone A Fistful of Composer

The Many Faces of Solaris

Posted by EUGENE PLAWIUK at 3:06 AM