The Other Seal Hunt 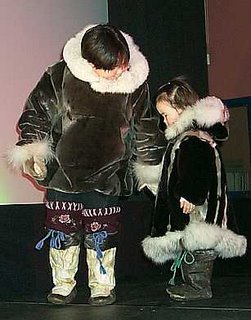 Stageleft has published a particular nasty racist little email that was sent to some Northern folks, the Inuit. It attacks them for seal hunting.

The Inuit who also are affected by the anti-seal hunt activists they have produced a new pro sustainable development video promoting the Seal Hunt in the North as part of a sustainable fishing/hunting economy.

But of course their video is nothing like the corporate campaign the Green NGO's do because of their deep pockets. Pockets filled annually by the fundraising campaign around the seal hunt.

In 1974 IFAW hired the same advertising agency as Coca-Cola to co-ordinate a $100,000 "Stop the Seal Hunt," campaign. Seal pup products are now banned in Europe and the U.S. Marine Mamal protection Act prevents any importation of seal products into Canada's largest trading partner. With annual revenues of $60 million a year and support from U.S., Canadian and European celebrities, the IFAW represents a publicity juggernaut, Simpson said.

Amongst Northern peoples, those in the Circumpolar Arctic, sealing is part of the traditional economy. The Green NGO's like to claim that the Inuit and other aboriginal peoples are simply dupes of the fur industry! The fact that traditional hunter gatherer economies are based on hunting, duh oh, might have something to do with it of course doesn't cross their minds.

This is a morality play about the angst people in the south feel about the North, urban sophisticates living in the metropoles versus the rural rubes and rednecks who live in the Southerners much cherished 'wilderness".

Its people in the south versus Peoples in the North, and by the way the Newfoundland Hunt is in Labrador where it is part of the traditional way of live of the aboriginals who live there as well as the Fisher folk from the Rock.

Unfortunately the Green moralists believe that the Hunting and Fishing Folk should pay the price for urbanites to wander in a people-less wilderness.

McCartney called the hunt "barbaric" and a "stain" on the country, and urged Ottawa to replace it with subsidies for fishermen and an eco-tourism industry.

It comes from all those cutesy wilderness movies put out by Walt Disney that generations have grown up on. The ones with the anthropomophic animals that talk. Which maybe why Ms.McCartney almost got bit by a baby seal, because she was probably trying to have a conversation with it.

Tom Hanson, Associated Press
A seal pup tries to nip at Paul McCartney and his wife Heather as she tries to pet it on the ice floes.

Paul McCartney and his wife Heather pose with a seal pup as part of a high-profile publicity stunt.
(CP Tom Hanson)

He and his wife posed for photographers while petting whitecoat pups, which are illegal to target.

And its nice to see someone put the Seal Hunt in context;

Did Viagra impact the Seal Hunt

A Rational Observation on the Seal Hunt

As a Labrador Inuit person, I am VERY offended by any assumption that Inuit are "bad" for supporting the seal hunt. This is a way of life that my ancestors before me and I have embraced. Propaganda by various organizations have painted us, as well as other members of East-coast society, as baby seal killers, which couldn't be further from the truth. The seals killed by my cultural niche are far from babies.
As is in ANY form of hunting, there are always those who take advantage of the hunting situation, and needlessly harm some populations of animals. This can be seen in the hunts of many different species.
So why is it that the seal hunt is so different? Well I've come to my own conclusions... Simply because........
...they're cute.
How sad is our world?