Life Is A Video Game

"Life is a video game, you've got to die sometime."

That sums it up...we are all becoming victims of Doom and other first person shooter games.

And this emotional plague is only going to spread wider as these games move to cellphones and IPods....Nokia, EA team up to offer games

And those of you who think the emotional plague inherent in violent video games has no impact well remember Columbine, they practiced with first person shooters.

The mesmerizing impact of living in a video game is an expression
of alienation in modern atomistic society.

I am arguing that children and teenagers are spending much of their time in simulations, rather than in the natural or “real” world. It is an argument, which if true, has serious implications for not only our children, but also for the future of our society. Essentially, I believe that the unreal, the simulation, the simulacra has been substituted for the real in the lives of our children. This occurs at many different levels: in the video games that are so much a part of the experience of contemporary childhood; in the shopping malls and “commercial civic spaces” where our children spend so much of their time; in television programs, advertisements and movies; in the theme parks where we vacation; in the online chat rooms and discussion programs through which we communicate and exchange information; and finally, in the images of beauty and sexuality that run as a powerful undercurrent through much of our culture and the lives of our children.
Let me begin by reflecting a bit on the information included on the recently released videotapes made by Eric Harris and Dylan Kleibold shortly before the Columbine High School shootings last year.
It is very clear that Harris and Klebold wanted to tell the world a story whose script they seem to have learned through the entertainment media—particularly from ultra-violent films and video games. Harris tells his story in front of a video camera with a bottle of Jack Daniels and a sawed-off shotgun cradledin his lap.
Eugene F. Provenzo, Jr. Professor School of Education University of Miami


The result is not a mass cultural phenomena (each case like Dawson or Columbine appears isolated in itself ) which allows proponents of gaming to dismiss criticism. Rather it is an individual who lives in their game and acts out in mass culture. Something the defenders of gaming cannot account for. Even though they know full well these games originated in the military and are used for training the armed forces.

Those who would say that this is not so use statstical data on crime rates in relation to violent video games to dismiss the critics.

The reality is that those susceptible to the emotional plague will succumb to living these games out in reality. This video computer simulacrum, as Baudrillard calls it, becomes their real life.

On a Web site filled with obscenities and hatred for authority, Gill posted a log and about 50 pictures of himself, many of them posing with a semi-automatic rifle and wearing a long black trenchcoat and boots.

In rambling and angry blog entries, using the identification fatality666, Gill raved about video games involving shooting, and said "I love guns. . . . I really do. The great equalizer. . . . wouldn't you say?"

His log entries often evoked scenes of random shootings. In one, predictive of the drizzly weather Wednesday when the shootings occurred, he wrote, "The disgusting human creatures scream in panic and run in all directions, taking with them the lies and deceptions. The Death Night gazes at the humans with an empty stare, as they knock each other down in a mad dash to safety. He wishes to slaughter them as they flee. . . ." 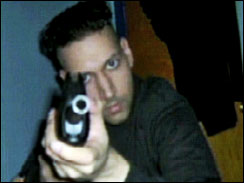 A picture from Kimveer Gill's Blog


In the psychological system of Wilhelm Reich, the "emotional plague" exists as a sort of mental disease which spreads throughout societies whose members are genitally blocked, i.e., incapable of genuine, healthy sexual love or expression. Hating life, creativity and freedom, and terrified that their own frustrated drives could explode uncontrollably at the slightest provocation, victims of the "emotional plague" cope by seeking to control, punish, and censor others who are healthy.Emotional Plague


We see that the compass of the emotional plague coincides approximately with the broad compass of social abuse, which has always been and still is combatted by every social freedom movement. With some qualifications, it can be said that the sphere of the emotional plague coincides with that of “political reaction” and perhaps even with the principle of politics in general. This would hold true, however, only if the basic principle of all politics, namely thirst for power and special prerogatives, were carried over into those spheres of life which we do not think of as political in the usual sense of the word.

the emotional plague
A term initially proposed by Wilhelm Reich for the psychological syndrome
marked by irrational insistence on beliefs and ideas that depend on dissociation
of mind from body. Reich also refered to it as "the neurotic character in destructive
action on the social scene". Though this dissociation has plagued humanity for many
centuries, it wasn’t until the “The Age of Reason” that the abstract intellect was
exalted to god-like status with Newton’s theories and Descartes’ “Meditations”.
The current era of emotional plague has accelerated via the massive collective
projection of physical, emotional and sexual energy into mental, or virtual,
mediums such as the internet, VR technology, video games, mass media
advertising, and television. If emotional plague is caused by disassociating
mind from body, its confusion can be easily maintained by mistaking
the virtual for the real, by taking an image or an idea of a reality
for the reality itself; eating the menu instead of the meal, etc.

"The emotional plague is a chronic biopathy of the organism. It made an inroad into human society with the first mass suppression of genital sexuality; it became an endemic disease, which has been tormenting people the world over for thousands of years. [...] Epidemic outbreaks of emotional plague became manifest in widespread and violent breakthroughs of sadism and criminality, on a small and large scale. One such outbreak was the Catholic Inquisition of the Middle Ages; the international fascism of the 20th century is another.

If we do not look upon the emotional plague as an illness in the strict sense of the word, we would run the risk of mobilizing the police against it, instead of medicine and education. The nature of the emotional plague necessitates police force, and this is how it is spread. It does indeed represent a grave threat to life, but one that will never be eliminated by the police force.

[...]The ascetic, plague-ridden individual uses ethical odes to justify his sexual debility. The justification has nothing to do with the manner in which he lives, which is there before the justification. The healthy person will not want to impose his way of life on anyone but he will cure and he will help others when he is asked and when he is capable. [...] Thus, it is not surprising that truthfulness and straightforwardness, though highly extolled modes of behavior, are rarely encountered in human intercourse. [...] The fact that they are not, that they are looked upon with astonishment, that truthful and straightforward men and women are considered freaks, a bit 'touched in the head', all this cannot be explained on the basis of the ruling cultural ideology...we must turn to our knowledge of the organized emotional plague.

It cannot be assumed that any freedom movement will have any chance of achieving its goals if it does not sharply and clearly confront the organized emotional plague with truthfulness."

Make Friends and Kill Yourself

Posted by EUGENE PLAWIUK at 5:46 AM

Shopping the cheap battery,you can see from here.