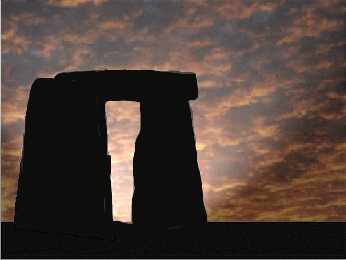 Ancient civilizations that we are discovering/recovering give credence to the Atlantis Mythos, that ancient humans were more 'civilized' than we thought.

Thus condradicting the 'scientistic' bias that we are advanced and earlier cultures are 'primitive'.

Which also discredits idiots like Erich Von Daniken who belive that primitive man was incapable of advanced momument building so he attributes it to space aliens.

Who is only out done in stupidity by the Creationist Cretins who believe the world was only created 4,400 years ago.

In fact the ancient celebrations of the Sun at solstice, continue with us today. It marks the passing of the year from Summer through Winter. All other markings of the calendar are then based on planting and harvesting times of agrianian cultures.

Monument builders reveal an agrarian based culture, one that meant peoples remained in the area rather than being nomadic hunter gatherers. The fact that across the world in distant locations but at the same time period, 2000-4000 years ago, pyramid and monument building was being done by diverse disconnected agrarian civilizations, shows that our social evolution is collective.

That it is historical materialist; that is the material basis of production affects our conciousness. Thus as peoples developed settled agrarian cultures they became monument and pyramid builders. In Asia, Asia Minor, Europe and the Americas.

The remnants of our past memories of this time period are reflected in the continuing celebration of our Fire Rituals of Summer and Winter.

A tip o' the blog to John Murney for this.

June 22, 2006 — An ancient British tomb monument contemporary with the first phase of Stonehenge’s construction suggests one prehistoric culture built the two structures to mark the summer solstice, according to archaeologists.

The tomb is called Bryn Celli Ddu, which in Welsh translates to "the mound in a dark grove." It is located on the island of Anglesey off the northwest coast of Wales. New radiocarbon dating of postholes outside of the burial monument determined the mound is over 6,000 years old. Stonehenge dates to around 2800 B.C., but some historians think it could be much older.

Museum Wales Book "The Tomb Builders in Wales: 4,000-3,000 B.C.," both Bryn Celli Ddu and Stonehenge are aligned with the summer solstice.

The heel stone at Stonehenge marks this event, while a passageway and quartz-rich stone located in the back of the burial monument lights up in a dramatic sun show.

In Brazil, a tropical Stonehenge is found

SÃO PAULO, Brazil — A grouping of granite blocks along a grassy Amazon hilltop may be the vestiges of a centuries-old astronomical observatory — a find archaeologists say indicates early rainforest inhabitants were more sophisticated than previously believed.

The 127 blocks, some as high as 9 feet tall, are spaced at regular intervals around the hill, like a crown 100 feet in diameter.

On the shortest day of the year — Dec. 21 — the shadow of one of the blocks disappears when the sun is directly above it.

"It is this block's alignment with the winter solstice that leads us to believe the site was once an astronomical observatory," said Mariana Petry Cabral, an archaeologist at the Amapá State Scientific and Technical Research Institute. "We may be also looking at the remnants of a sophisticated culture."

Anthropologists have long known that local indigenous populations were acute observers of the stars and sun. But the discovery of a physical structure that appears to incorporate this knowledge suggests pre-Colombian Indians in the Amazon rainforest may have been more sophisticated than previously suspected.

"Transforming this kind of knowledge into a monument; the transformation of something ephemeral into something concrete, could indicate the existence of a larger population and of a more complex social organization," Cabral said.

Cabral has been studying the site, near the village of Calçoene, just north of the equator in Amapá state in far northern Brazil, since last year. She believes it was once inhabited by the ancestors of the Palikur Indians, and while the blocks have not been submitted to carbon dating, she says pottery shards near the site indicate they are pre-Columbian and maybe older — as much as 2,000 years old.

Last month, archaeologists working on a hillside north of Lima, Peru, announced the discovery of the oldest astronomical observatory in the Western Hemisphere — giant stone carvings, apparently 4,200 years old, that align with sunrise and sunset on Dec. 21

The large megalithic sites were built over 5,000 years ago between 3800 and 3200 B.C., built before both Stonehenge in England and the great pyramids in Egypt. Within a three mile radius in the Boyne Valley are more than 30 prehistoric monuments, including the great passage tombs and their satellite structures, standing stones, barrows and other enclosures.

Neolithic communities built these sites over earlier sacred spots and it is suspected that they were used for a combination of purposes, including use as burial tombs, sacred temples and astronomical observatories.

NEWGRANGE: The most famous prehistoric monument in Ireland, Newgrange, a passage tomb, was built around 3200 B.C. The most interesting feature—a "light" box over the entrance to the chamber designed to capture sunlight to illuminate the chamber on the winter solstice. (Tourism Ireland)

The most famous of all Irish prehistoric monuments, Newgrange was built on a one-acre site around 3200 B.C. and draws more than 200,000 visitors each year. It is one of only three United Nations Educational, Scientific and Cultural Organization (UNESCO) World Heritage Sites in Ireland. It is known as a passage tomb, which is defined as a grave set in a mound of earth or stone with a passage leading to a central chamber. Passage tombs are usually found in groups and Newgrange is no exception, as it is surrounded by 40 other such sites.

The chamber inside the mound measures 21.5 feet by 17 feet and has three separate recesses (chambers) off the main chamber. The most amazing and well-known feature of Newgrange is the presence of a roof or light box over the entrance to the chamber. The roof box was specifically designed to capture the light from the sun and illuminate the chamber on the winter solstice (Dec. 21). When the sun rises over Newgrange on this day, its rays enter the roof box and penetrate 65.62 feet into the ground to illuminate the entire chamber for 17 minutes, from 8:58 a.m. to 9:15 a.m.

During the following three days, some sunlight enters the chamber, but not as much as on Dec. 21. The roof box is engraved with a series of eight lozenges that may represent the eight pagan festivals that were held each year. This box was designed so precisely with the rising of the winter solstice sun, that it has shown without doubt that these people had an extensive knowledge of astronomy.

Sun worship is alive and well all over Europe, even in our century. I don't mean the summer invasion of beaches where bodies bake to a shade of toast. Or even the ancient Druidic rites this week in places like Stonehenge, as the midsummer sun astonishes by rising in perfect alignment with the huge stone circle. I have in mind a custom widely celebrated from Scandinavia to southern Spain, from Russia to Ireland, and even in China. In this midsummer week, pagans, Christians and unbelievers alike will gather for fire ceremonies that have their origins in rites associated with the sun. Communities and families will light bonfires and dance around them, young lovers leap over the flames together or toss flowers across the fire, flaming brands will be carried around the fields.

The fire ceremony itself probably goes back to the beginnings of human history. But the Catholic Church absorbed the old pagan celebration into its own calendar by setting the feast day of St. John the Baptist on June 24. The symbolism was deliberate: just as, in the pagan and Celtic religions, the summer king gives way at midsummer to the winter king, similarly John the Baptist gives way to Jesus Christ, who will be born around the winter solstice. Ancient nature beliefs say that such turning points in the year open doors between worlds. The "standing still" of the sun was said to release much magic, and the barriers between nature spirits and humans to briefly fall. St. John's Eve, then, is meant to be a time of special power for gathering healing herbs, or drawing a protective ring of fire around crops and cattle.

For a Ruthless Criticism of Everything Existing

Furthermore, these agricultural socities with their monumental architecture appear to have been stateless. The tombs were communal in nature and little differentiation in grave goods. Also few weapons. I suspect Neolithic-chalcolithic Europe wasn't a heck of a lot different socially and spiritually from Aboriginal society in N America. Great inequality in grave goods and grave mounds for single individuals - plus a lot of weapons - comes later, during the Late Bronze Age circa 1500 BC

Thanks for that Larry, as well as being stateless, they were Matriarchical, thus participatory societies with equality, while there were divisions of labour such divisions were celebrated rather than used to keep folks in their place.
As Maria Gimbutas speculated, this was probably the longest peaceful period of human development for those reasons.

As social divisions occur over property and labour the priest-craft evolve the State to represent the Sun God King, giving rise to our later authoritarian patriarchical Empires. the priests define the culture as Warriors, Priests and workers, and then develop myths and legends to reflect this new class society.

Very interesting! I didn'd know that Brazilian ancestors build very well! I like it! I want to vizit Brazil next year and probably buy in Brazil property! I think it will be good investment!

The comment is good, there are some people in the world who do something. But the one who walks with everyone is a good person, really your post is very good and very unique thanx

This is a good comment, it is an inspiration for today's youth, when we see such comments, we get to learn a lot from such articles. Can you write an article on a delightful subject which is such an article. I want to thank them.