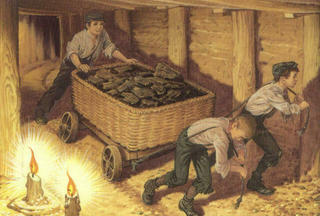 
Your server today is a 12-year-old
Children unable to stand up to abuse or recognize safety hazards, critics say

No longer are ten year old hitched to coal wagons to haul the black gold out of Alberta's mines as they once were. Nope we outlawed child labour back in 1927. Yep as late as that.

Not satisfied with being the richest province in Canada and the one with the lowest minimum wage, the worst labour laws, lowest welfare payments, lowest support payments for people with disabilities, the least amount of public daycare, the Alberta Reich of Ralph Klein has reintroduced Child Labour.

Sneaky Tories, snuck this under the radar, and suddenly as of the begining of June it was ok for 12 year olds to go to work. To work in an industry like fast food where the health and safety laws are lax and the enforcement nil.

Learning a lesson from B.C. which re-introduced Child Labour several years ago with much public fanfare and creating a labour union backlash and firestorm, our clever Tories passed this law in cabinet, in camera, with no notice, it's a done deal.

B.C. Federation of Labour President Jim Sinclair also noted that when the Liberals changed Employment Standards, prospects for BC's young job seekers went from bad to worse. "High school and college kids who had problems finding work in 2001 now have to compete with 12-year-old children for summer and part-time jobs," said Sinclair. "Employers can exploit kids as young as 12 for as little as $6.00 per hour, while older kids have to borrow huge amounts of money to finish school."
Yep thats the Tory cure for what ails our kids, make em wage slaves. Don't provide them day care, or early childhood education, nah make em work for a living. After all thats what capitalist education is all about isn't it. Getting kids ready for being the future wage slaves of capitalism.

And then we wonder why kids do poorly in school. High School and Post Secondary students already are working and going to school. And studies have shown working 2o hours per week (which is the average for most High School students in Alberta) impacts on their ability to study. Working and going to school leads to declining test scores. What will it do to the test scores of 12-16 years olds?

Of course the government will once again denounce the public education system for failing students, and propose more market options; charter schools, voucher funding, private school funding, for parents as they have done for the last decade.

The real crime against youth is the Ralph Reich that promotes the ideology that Government is in the business of serving business.

Whether its exploiting immigrant workers in non unionized packing plants, immigrant farm labour on Farmer Browns ranch in Southern Alberta, low waged child care workers in privatized daycares, supporting rat unions like CLAC and non-union merit shops in the construction industry, Ralph and his pals do it all to you for their pals in business.

As of June 3, 2005, the Alberta government now allows restaurant owners to employ children between the ages of 12 and 14 without applying for a permit. This change was implemented at the request of the restaurant industry and without public debate or notice.

The government is trying to say that the change is merely "procedural", but its real impact could affect thousands of children between the ages of 12 and 14. It could expose them to workplace dangers from grills, fryers and slicing machines. It also leaves them vulnerable to employer abuse and exploitation.

The AFL is opposed to 12-year olds working in restaurants, and is acting to get the government to reverse its decision.

What you can do

Albertans need to make their voice heard. The government needs to hear that it is not okay to put children to work. Tell them you want them to reverse the restaurant industry exemption. We don't want our kids serving sandwiches!

The story came off the news wires. It revealed that three lions saved a young girl who had been abducted and raped. The wilderness officials claimed that the bloodied young girl may have been mistaken for a mewling cub. But what they can't explain is why the lions did not react to the human blood, which they would smell, and know she was not a cub. Nor could they explain why the lions waited until her family came, again knowing them by the scent, protecting her then leaving her when her family arrived.

As anarchists would say this is another example of Kropotkins Mutual Aid also known as interspecies solidarity.

It is another blow to the theory of 'dumb animals', which has justified human enslavement of animals as chattel property under christianity and other patriarchical religions that define human beings as owners of the earth.

Ethiopia is the homeland of Rasstafarianism, Ancient Orthodox Chrisitanity, Judaism and Islam. And these religioons still treats animals, women and children as chattel property.

ADDIS ABABA, Ethiopia - A 12-year-old girl who was abducted and beaten by men trying to force her into a marriage was found being guarded by three lions who apparently had chased off her captors, a policeman said Tuesday.

The girl, missing for a week, was taken by seven men who wanted to force her to marry one of them, said Sgt. Wondimu Wedajo, speaking by telephone from the provincial capital of Bita Genet, about 350 miles southwest of Addis Ababa.

She was beaten repeatedly before she was found June 9 by police and relatives on the outskirts of Bita Genet, Wondimu said. She had been guarded by the lions for about half a day, he said.

"They stood guard until we found her and then they just left her like a gift and went back into the forest," Wondimu said.

"If the lions had not come to her rescue, then it could have been much worse. Often these young girls are raped and severely beaten to force them to accept the marriage," he said.

Tilahun Kassa, a local government official who corroborated Wondimu's version of the events, said one of the men had wanted to marry the girl against her wishes.

"Everyone thinks this is some kind of miracle, because normally the lions would attack people," Wondimu said.

Stuart Williams, a wildlife expert with the rural development ministry, said the girl may have survived because she was crying from the trauma of her attack.

"A young girl whimpering could be mistaken for the mewing sound from a lion cub, which in turn could explain why they didn't eat her," Williams said.

Ethiopia's lions, famous for their large black manes, are the country's national symbol and adorn statues and the local currency. Despite a recent crackdown, Hunters also kill the animals for their skins, which can fetch $1,000. Williams estimates that only 1,000 Ethiopian lions remain in the wild.

The girl, the youngest of four siblings, was "shocked and terrified" after her abduction and had to be treated for the cuts from her beatings, Wondimu said.

He said police had caught four of the abductors and three were still at large.

Kidnapping young girls has long been part of the marriage custom in Ethiopia. The United Nations estimates that more than 70 percent of marriages in Ethiopia are by abduction, practiced in rural areas where most of the country's 71 million people live.