THE REPUBLIC IS AN IMPERIUM 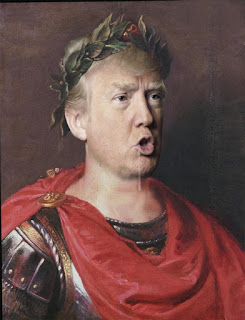 AMERICA HAS ALWAYS SUFFERED FROM PRETENSIONS OF RECREATING THE ARISTOCRACY IT ABANDONED WITH ITS REVOLUTION.

THERE IS A TORY TENDENCY IN AMERICA
THAT SEES ITS CELEBRITIES AS ROYALTY,
EVERYONE OF THEM MAKES MORE
AND HAS MORE POWER AND FANS THAN QE2

WHY WOULD A COUNTRY THAT PROCLAIMS ITSELF A DEMOCRATIC REPUBLIC,


REDUCE ITSELF TO A REPUBLICAN IMPERIUM WITH AN EMPEROR

HAVE THEY NOT READ THEIR BURKE


ON THE RISE AND FALL OF THAT OTHER IMPERIAL REPUBLIC

Meet the Trump of Ancient Rome, a Populist Demagogue
Who Helped Bring Down the Republic
The man who ultimately brought down the system was a wealthy and ambitious nobleman named Publius Clodius Pulcher, a populist demagogue who refused to play by the rules. Clodius had always been eccentric and unpredictable in ways that both shocked and amused the Roman populace. As a young man, he had incited a mutiny among his brother-in-law’s troops. Then, when pirates captured him, he took deep offense at the small ransom they accepted for his release.
Nothing was sacred to Clodius. The more audacious his behavior, the more the public loved him for it. In Rome, for example, Clodius, a noted ladies’ man, committed sacrilege by dressing up as a woman and infiltrating the female-only religious festival of the goddess Bona Dea, with the aim of seducing Pompeia, Julius Caesar’s wife. The scandal led Caesar to divorce Pompeia and gave rise to the famous quip that Caesar’s wife needed to be beyond suspicion.

What Clodius’s critics failed to realize was that he was smart, determined and very much in touch with the frustrations of the common people.

Posted by EUGENE PLAWIUK at 3:30 AM 4 comments: 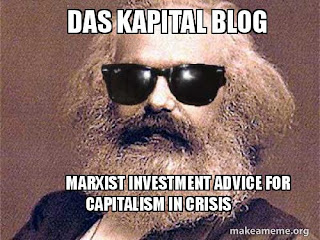 Consumer debt in Canada is, frankly, a problem.

According to a recent report from credit monitoring agency TransUnion, the typical Canadian now owes $21,686 excluding their mortgage — a number that has not stopped increasing for over a decade now. To give you a sense of the severity of our consumer debt situation, for every $1 of disposable income, the average Canadian owes $1.65. In fact, Canada’s household debt — the amount of money that all adults in a household owe financial institutions—is the highest among its Group of Seven peers, even exceeding the size of our own economy!

Let us remember that the current Financial capitalist system is the result of the evolution of Capitalism post Bolshevik revolution when for a period of time post WWI the Austrian School of Anti Marx Anti Socialism pseudo market economics, as Karl Polanyi says they crashed the Austrian Kroener causing a depression but hey it proved their theory right.

As Hilferding correctly analysed Capitalism has moved from productive capital, industrialization, to Fiance Capital, banking Monopolies cartels, stock exchanges dominating the market, it was the post war expansion of Capital as Capital for the first time in the past three hundred years,

It lead to Depression globally, despite the magical thinking of Von Mises and Freddy Hayek, and in fact it was Keynes who saved Capitalism , first by clawing back financial speculation which is all the Austrian school is about, Keynes observing the workers revolution in Russia provided capitalism with a future free of revolution, by ending finance dominance and returning to production, in other words State Capitalism, which was historically hegemonic pre and post WWII. See Tony Negri Marx Beyond Marx

Finance capitalism did not return until Nixon ended the use of the gold standard and made the American dollar the basis of the world economy. American Imperialism then spent the seventies crashing economies in Latin America through Hot Money see Robert Naylor Dictatorships and brutal market capitalism ensued With a further financialization of the market Reaganism created the conditions for the financial tech bubble of the nineties.

For the 2000's we spent 16 years evolving into a told financial capitalist economy, where our debt was the 99% is what is fueling capitalist growth, our mortgages, our cars, appliances, our lives are a slavery to debt and capitalism can no longer produce with out our debt. Even if you pay off your debt next week you will quickly once again get into debt, because the system requires it.

The capitalist economists, and the executive of the state and the banks, tell us debt is bad, terrible, and then they offer us unlimited debt through credit cards, car financing a creation of the nineties, mortgages that last thirty and forty years, this is the real capital in circulation.

The 99% are capitalism, the 1% are parasites, coupon cutters, a rentier class, they are not capitalism, we are, only when the proletariat understands this can we say we are seeing a rise in class consciousness.

We have always created capital that is the secret Marx revealed, under advanced capitalism, it reaches a period of decadence where its expansion becomes a contradiction a negation of the negation. Here we see it in the ironic nature of post modern capitalism , it requires us to be in debt to grow, it requires our money, that it pays us to come back to it, to circulate as money M-C-M the earlier productive period of industrialization until the 20th Century was C-M-C which is why the politicians and pundits as well as journalists,today tell you on the one hand you should not be in debt and get out of it as quickly as possible bemoaning our debt load, while the Bloomberg, WSJ, etc. tell us we need to spend more to go into debt in order to keep the market going, its called SPENDING capitalism now requires capital not as production or property but as money, money is making money off money.

During Occupy Wall Street the Tobin Tax was renamed the Robin Hood Tax and was promoted as a way of reducing debt, since trillions of dollars trade in the FOREX minute by minute. Today those minutes and nanoseconds of computer time, which was created for the international monetary exchange markets, a late twentieth century development,


But let’s broaden the scope. The LinkNYC stations are maintained by CityBridge, a consortium of telecom, hardware, and media companies (notably, the Alphabet subsidiary Sidewalk Labs) under contract with the city government. It’s the kind of public-private infrastructure that excites the urban planners and technologists who imagine New York as a data-driven utopia, a so-called “smart city.”

Today you have M-B-M money bit money; Bitcoin and Fintech, which still maintain the language of capitalism in its industrial stage. It is even applied to this cloud based virtual business interface. You data mine for Bitcoins. Virtual currencies are bits of information, their value is zero yet they increase in value through exchange. The reality is that of course they do we live in an capitalist exchange value system which will twist all to its end of M-C-M.

However bits are just information, calculations, no more real now than when the Tulip Crash happened in the very first bourse. With the advent of fintech capital becomes redundant since all that is transferred now is information, bits and bits of information, and used cybernetically could act as a transformative element for the evolution of autonomous self managed socialism.


A family of four in Ireland spends about €50,000 a year on basic outgoing the average Irish homeowner were to add up all their spending over the course of a year, the chances are they would be pretty shocked by the total.

When all bills including food, mortgage payments, utilities, insurance and motoring costs, phones, entertainment, education and childcare are totted up, the cost of living for a family who bought even a modest home during the boom years could easily top €50,000. 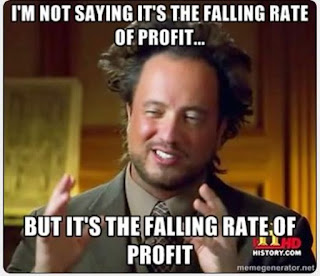