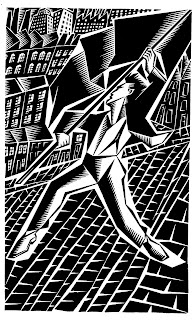 Many folks have seen Avi Lewis and Naomi Kleins NFB film The Take, here is a report on the mass self-valorization movement in Argentina and the people who took direct action and direct control of their lives and communities after the collapse of the IMF regime in their country.

It is an example of anarchism in action, the creation of use value, hence self-valorization, and the elimination of exchange values, money-capital-money, for a barter system. Which pre-dates capitalism and is known as the gift economy.

The story begins in 2001, when the Argentine economy collapsed under pressure of IMF demands. Unemployment reached 35 percent. Direct action movements of unemployed workers known as “piqueteros,” mostly women, began blocking highways and then negotiating with the authorities for subsistence programs and public works employment.

The example of the “piqueteros” spread to a more and more disgruntled population. Discontent came to a head as the government accepted even greater austerity demands from the IMF and imposed a state of siege to suppress popular protest. Every bank account in the country was frozen. On the night of December 19, 2001, people from all over Buenos Aires took to the streets banging pts and plans and marched on Congress and the presidential palace. The next day, spontaneous street demonstrations forced Fernando de la Rua to resign the presidency. People throughout the country from diverse class backgrounds began meeting in “self-convened neighborhood assemblies.”

In the context of the crisis, people began improvising new economic institutions. New bakeries and gardens began providing food, often with support and distribution through the neighborhood assemblies. Soon five to seven million people were involved in barter networks, trading not only basic goods but also services – for example, psychoanalysis for computer repair. They also began taking over abandoned buildings, notably banks, and reopening them as neighborhood centers.

Meanwhile, many bosses stopped paying their workers and eventually closed their workplaces. The idea of taking over the workplaces emerged in response. One textile worker says the takeover at the Brukman factory “wasn’t an occupation at first, but it became one without us intending it.”

“Together, everyone in the factory thought about our situation, and decided to stay to see if the bosses would decide to give us a little money so we could celebrate the holidays with our families. . . . We waited two months for the bosses to come back. We went to the unions, the Ministry of Work, all with the intention of getting the boss to come back and offer us a solution. He never came. So we decided to work.”

At the Chilavert printing factory,

“When we realized that they were going to come and take the machines, well, then we had to make a decision. The time for thinking had ended and we took over the workplace. . . You know that if they take the machines from you, you’ll end up on the street. It’s a reflex – you don’t think about cooperatives, you don’t think about anything. Defending your source of work is a reflex.”

More than 200 such “recuperated workplaces” are currently in operation. Almost all were closed, abandoned, in bankruptcy, and/or in debt and in arrears in payments to their employees. Seventy percent were initiated in the 2001-2 period, but such takeovers are still occurring. Most are in the Buenos Aires area, but others are scattered in all parts of the country. They employ about 10,000 workers in total.