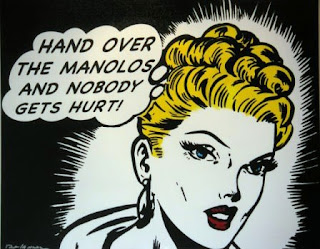 What is it with autocratic right wingers and their shoe fetishes?

Long kept under wraps, the plan – codenamed the Shoe Store Project – is in the works by the Privy Council Office and the PMO to establish a new government-controlled media briefing centre near Langevin Block.

Mila Mulroney came "close to breaking down," according to Newman, after reading Stevie Cameron's story on the PM's reported Gucci shoe collection.

In 1987, a Globe and Mail investigation revealed that the Mulroneys had borrowed $300,000 from the Tories to renovate 24 Sussex Drive. It was just one of many stories about Mila's love for shopping and her supposedly profligate spending. She earned the unfortunate nickname Imelda (after Imelda Marcos) for her reportedly large collection of shoes.

The world's best-known shoe collector, former Philippine First Lady Imelda Marcos, has opened a museum in which most of the exhibits are her own footwear.

The Marikina City Footwear Museum in Manila contains hundreds of pairs of shoes, many of them found in the presidential palace when Imelda and her husband, President Ferdinand Marcos, fled the Philippines in 1986

The court was also told about how Helmsley would frequently put shoes she had bought herself on the business accounts, wear them, then take them back to the store and demand a refund.

There was that now- famous "birthday party for Barbara Amiel" at New York's La Grenouille, the collection of handbags by Hermes Birkin, or Renaud Pellegrino, including one that cost $42,870 (£21,079), and the 100 pairs of Manolo Blahnik shoes.

Ever since leaving the environment portfolio, Rona Ambrose has unleashed her sense of humour and some fierce shoes -- that night she wore Kenneth Cole leopard print footwear with a blood-red heel.

Oh by the way the PMO now says they have closed the shoe store.

The Cone of Silence Over Kyoto