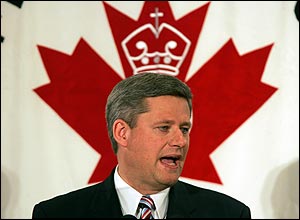 Mr. Harper said that he respects the National Assembly's declaration that Quebec is a nation, but that Ottawa has no need to enter the debate."I recognize that the Quebec National Assembly has adopted that position. I don't know quite frankly what its legal significance is," he said, adding later that "it just seems to me to be a semantic debate that doesn't serve any purpose."

Nope but then again Mr. Haprocrite can claim not to be a lawyer which is good because even as an economist he is a failure. And he says Ottawa doesn't have to enter the nation state debate with Quebec. Gee I thought that was the debate. And considering repatriation of the Constitution, Meech Lake, the Charlottetown accord, it is far from semantic.

Nation hmm lets look that up shall we;


Nationalists define individual nations on the basis of certain criteria, which distinguish one nation from another; and determine "who is a member of each nation". These criteria might include a shared language, culture, and/or shared values which are predominantly represented within a specific ethnic group. National identity refers both to these defining criteria, and to the shared heritage of each group. Membership in a nation is usually involuntary and determined by birth. Nationalism sees most human activity as national in character. Nations have national symbols, a national culture, a national music and national literature; national folklore, a national mythology and - in some cases - even a national religion. Individuals share national values and a national identity, admire the national hero, eat the national dish and play the national sport.

and it should not be confused with the Nation as State;

Historians Benedict Anderson or the Communist author Eric Hobsbawm have pointed out that in fact, the nation-state precedes nationalism. According to their conception, nationalism is a creation of the nation-state, and not the reverse. For example, French nationalism emerged in the 19th century, once the French nation-state already constituted through the unification of various dialects and languages into the French language, and also by the means of conscription and the Third Republic's 1880s laws on public instruction. However, in countries divided into multiple states such as Germany or Italy, the sense of a common membership to the same cultural movement, as in the Volkisch movement, can be said to be nationalism, and in this case precedes the unification of the various states into the German or the Italian state.

One of the earliest, and perhaps oldest example of a nation state was the Dutch Republic (1581 and 1795).The Eighty Years' War that began in 1568, triggered a process of what we would now call "nation-building", the following circumstances/events were very helpful in this process:

And Quebec nationalism does not mean the end of Canada.It is the source of the greatest classic liberal (as in Thomas Paine the Rights of Man) political critique of the Canadian State that originated in the great Con that was the federation of 1867.

Coincidently both founding ruling classes in Pan-Canada; the English/Scottish and Irish Freemasons, and the French and Irish Catholics celebrate the summer solstice with St. Jean Baptiste/St. John the Baptist celebrations. They are the rites of Bourgeoisie nationalism.

'Fete nationale' a Canadian holiday: Harper As in Les Canadiens. Since the Canadian National anthem originated in Quebec as part of its St. Jean Baptiste celebrations.

And Quebec and Canada are federated nations, who also share a common colony; Haiti. That makes them both bourgeoise nations and Imperialist.

And behind the Harpocrites dismissal of the Quebec Nation as semantic, is his self professed status as autarch of the Canadian State.

And we know how anarchists feel about the State, and nationalism. They are last refuge of the scoundral.

The ever growing power of a soulless political bureaucracy which supervises and safeguards the life of man from the cradle to the grave is putting ever greater obstacles in the way of the solidaric co-operation of human beings and crushing out every possibility of new development. A system which in every act of its life sacrifices the welfare of large sections of the people, yes, of whole nations, to the selfish lust for power and the economic interests of small minorities must of necessity dissolve all social ties and lead to a constant war of all against all. This system has been merely the pacemaker for the great intellectual and social reaction which finds its expression today in modern Fascism, far surpassing the obsession for power of the absolute monarchy of past centuries and seeking to bring every sphere of human activity under the control of the state. Just as for the various systems of religious theology, God is everything and man nothing, so for this modern political theology, the state is everything and the man nothing. And just as behind the "will of God" there always lay hidden the will of privileged minorities, so today there hides behind the "will of the state" only the selfish interest of those who feel called to interpret this will in their own sense and to force it upon the people. Anarchosyndicalism by Rudolf Rocker - Chapter 1

But it is Rudolph Rocker (1873-1958) who, in Nationalism and Culture (1937), provides the fullest anarchist discussion of nationalism. To Rocker it is clear that 'The nation is not the cause, but the result of the state. It is the state which creates the nation and not the nation the state.' (28) This assertion becomes more plausible when he proceeds to distinguish between a 'people' - what Proudhon had called a 'folk-group' - and a 'nation'. 'A people', he explains, 'is the natural result of social union, a mutual association of men brought about by a certain similarity of external conditions of living, a common language, and special characteristics due to climate and geographic environment. In this manner arise certain common traits, alive in every member of the union, and forming a most important part of its social existence. The nation, on the other hand, is the artificial struggle for political power, just as nationalism has never been anything but the political religion of the modern state. Belonging to a nation is never determined, as is belonging to a people, by profound natural causes; it is always subject to political considerations and based on those reasons of state behind which the interests of privileged minorities always reside.' And in a passage relevant to the manifestation in recent years of both 'sub-nationalisms' and the nascent 'supra-nationalism' of some ideologists of the EEC, Rocker insists: 'A people is always a community with narrow boundaries. But a nation, as a rule, encompasses a whole array of different peoples and groups of peoples who have by more or less violent means been pressed into the frame of a common state.' 'National states' (he concludes) 'are political church organisations...All nationalism is reactionary in its nature, for it strives to enforce on the separate parts of the great human family a definite character according to a preconceived idea...Nationalism creates artificial separations and partitions within that organic unity which finds its expression in the genus Man.'Resisting the nation state

Origins of the Captialist State In Canada

Voting for Capitalism On January 23

Seems 82% of those who voted in this CTV poll agree with PMSH:

Premier Jean Charest says he has no problem calling Quebec a nation. Do you have a problem with the word?

Apparently the Harpocrite and others in English Canada do have a problem with the idea of Quebec as a Nation. From your poll figures. Typical English Canadian chauvinism. You obviously did not read the links in my article. Canadian con-federation was a merger of two nations, one which got sold out by its compradour ruling class; Quebec, which by the way is also the source of Western Canadian alienation see my Rebel Yell.
So I think you made my point.