War On Satan the Sodomite 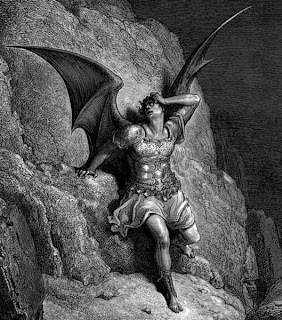 As I said here religious fundamentalists of all stripes have declared war on Satanism and the result is always scary.


Papal Bulls dealing with heresy equated sodomy with sorcery.
Which were always a double edged sword. Before we had real witch-hunts we had the political campaigns using accusations of heresy, sodomy and sorcery.

The King of France issued charges of sodomy, simony, sorcery, and heresy against the pope and summoned him before the council. The pope's response was the strongest affirmation to date of papal sovereignty. In Unam Sanctam (November 18, 1302), he decreed that "it is necessary to salvation that every human creature be subject to the Roman pontiff." He was preparing a bull that would excommunicate the King of France and put the interdict over France, and to depose the entire clergy of France, when in September of 1303,

The Pope survived however the Knights Templar were not so lucky. Sodomy and sorcery were seen as capital offenses as King Edward the Second would discover.

The chronicle of Geoffrey le Baker, written about thirty years later, mentions Edward's ill-treatment. He was held in a cell above the rotting corpses of animals, in an attempt to kill him indirectly. But Edward was extremely strong, fit and healthy, and survived the treatment, until on the night of 21 September 1327, he was held down and a red-hot poker pushed into his anus through a drenching-horn. His screams could be heard for miles around. Here are some other ideas on the story: - Mary Saaler, in her 1997 biography of Edward II, quotes Adam Murimith's comment that Edward was killed per cautelam, by a trick, and wonders if this phrase became corrupted to per cauterium, a branding-iron. - Pierre Chaplais and Ian Mortimer have commented on the death of King Edmund Ironside in 1016, said to have been murdered in a similar way to Edward, while sitting on the privy. The story was often repeated in thirteeth-century chronicles. - And finally, Edward's brother-in-law the earl of Hereford was killed at the Battle of Boroughbridge in 1322 when he was skewered through the anus by a spear pushed up through the bridge. It's my belief that the grotesque 'anal rape' narrative of Edward's death (Dr Ian Mortimer's phrase) is nothing more than a reflection of the popular belief that Edward was the passive partner in sexual acts with men, and that this means of death represented Edward receiving his 'just desserts'. The deaths of the earl of Hereford and Edmund Ironside may have provided the inspiration for this. Similarly, the castration (or emasculation) of Edward's favourite, the younger Despenser, in November 1326, was said by the chronicler Jean Froissart to be a punishment for his sexual relations with Edward. Whether this is true or not is impossible to say, but I think the narratives of both men's deaths reflect the widespread belief that they had sexual relations and were punished for them. Often, a story that begins as a joke or a rumour takes on the aura of 'truth' - such as the death of Edward's descendant George, Duke of Clarence, who died in the Tower of London in 1478. He is supposed to have drowned in a 'butt of malmsey'. It's difficult to ascertain whether this is the truth, or merely reflects his reputation as a drunkard.

After the Reformation the Protestant Churches criminalize heresy with the same result.
Rennsiance England saw the continuation of persecution of gay men as heretics, sorcerors and sodomites.

In Reformation England and France, Protestants and Catholics hurled accusations of homosexuality at one another. Although homosexuality was largely ignored in England until the seventeenth century, burnings continued in France. Still, several monarchs and many aristocrats were perceived by their contemporaries as having same-sex relationships, including Kings Henry III and Louis XIII, Philippe d'Orleans, and four of Louis XIV's generals. As for England, Crompton argues, against many biographers, that James I and William of Orange had male favorites. After William's reign, however, toleration of homosexuality decreased in England and hangings became more and more frequent. Meanwhile, French Enlightenment thinkers began to question state enforcement of church-based morality and whether “victimless” crimes should be prosecuted at all.

"Buggery, sodomy" , male to male sex was never seen as consensual but as being Satanic. The person was possessed overwhelmed, seduced, enticed.

As we moved into more modern times this last vestige of medieval religious fear of the other was then transformed from a heresy equated with fascination, spell casting and sorcery, the idea of the magickal use of ones will to dominate another into the more modern idea of male rape. In patriarchy one can only be taken by someone more masculine. Homosexuality as buggery was the very essence of masculinity.

Pennsylvania, 1786. In a sweeping liberalization of the legal system, the state of Pennsylvania removed capital punishment for many crimes including burglary, robbery, sodomy, and buggery (in Pennsylvania at the time, "buggery" referred to sex with animals). These formerly capital crimes had their sentences reduced to the forfeiture of all property and a period of servitude not to exceed 10 years.

Pennsylvania's enthusiasm for legal reform came from an abhorrence of the English legal code which legislators felt was forced on the colonies before the American Revolution of 1776. In an effort to cast off the legal vestiges of British rule, they began a movement toward legal reform that led to the elimination of capital sentences for most crimes.

All homosexual sex was seen as rape by any other name, despite the revolutionary movements of the Enlightenment the medieval fear of homosexuality as something dark, satanic, remained in British law which of course influenced law in Canada.

In 1859, offences punishable by death in Canada included: murder, rape, treason, administering poison or wounding with intent to commit murder, unlawfully abusing a girl under ten, buggery with man or beast, robbery with wounding, burglary with assault, arson, casting away a ship, and exhibiting a false signal endangering a ship.

Before 1859, Canada relied on British law to prosecute sodomy. In 1859, Canada repatriated its buggery law in the Consolidated Statutes of Canada as an offense punishable by death. Buggery remained punishable by death until 1869. A broader law targeting all homosexual male sexual activity ("gross indecency") was passed in 1890. Changes to the criminal code in 1948 and 1961 were used to brand gay men as "criminal sexual psychopaths" and "dangerous sexual offenders." These labels provided for indeterminate prison sentences. Most famously, George Klippert, a homosexual, was labelled a dangerous sexual offender and sentenced to life in prison, a sentence confirmed by the Supreme Court of Canada. He was released in 1971.

Canadian law now permits anal sex by consenting parties above the age of 18, provided no more than two people are present. The bill repealing Canada's sodomy laws achieved royal assent on June 27, 1969. The bill had been introduced in the House of Commons by Pierre Trudeau[10], who famously stated that "there's no place for the state in the bedrooms of the nation" [11]. In the 1995 Ontario Court of Appeal case R. v. M. (C.), the judges ruled that the relevant section (section 159) of the Criminal Code violated section 15 of the Charter of Rights and Freedoms when one or both of the partners are 16 to 18 years of age; this has not been tried in court again.

A similar decision was made by the Quebec Court of Appeal in the 1998 case R. v. Roy.

To be a poof, a queer, a three dollar bill, a fairy, a faggot, etc. was to be destined for the gallows. And it was no less a social and moral offense to decent society when the death penalty was finally removed.

Everett George Klippert (1926 - 1996) was the last person in Canada to be arrested, charged, prosecuted, convicted, and imprisoned for homosexuality before its legalization in 1969; the reforms which led to Canadian legalization of homosexuality were a direct result of the Klippert case.

Klippert, a mechanic in the Northwest Territories, was first investigated by police in connection with an arson in 1965. Although he was not found to have had any connection with the fire, Klippert voluntarily admitted to having had consensual homosexual sex with four separate adult men. He was subsequently arrested and charged with four counts of "gross indecency".

A court-ordered psychiatrist assessed Klippert as "incurably homosexual", and Klippert was sentenced to "preventive detention" (that is, indefinitely) as a dangerous sexual offender. Klippert appealed to the Court of Appeal for the Northwest Territories; his appeal was dismissed. He then appealed to the Supreme Court of Canada; his appeal was dismissed in a controversial 3-2 decision.

The day after Klippert's conviction was upheld, New Democratic Party leader Tommy Douglas invoked Klippert's name in the Canadian House of Commons, stating that homosexuality should not be considered a criminal issue. Within six weeks, Pierre Trudeau presented an omnibus bill (C-150) which, among other things, decriminalized homosexual acts between consenting adults. The law passed, and homosexuality was decriminalized in Canada in 1969.

Klippert, however, remained in prison until July 21, 1971, whereupon he was released. He lived twenty-five more years before his death from kidney disease in 1996.

And this fear, this law, this history remains the basis of homophobia in patriarchal society today. Homophobia is based upon the fear of man penetrating man, as this law shows. It shows that homosexuality was recognized as a sexual / gender reality but at the same time denied as an aberration of the norm. The norm being of course patriarchal masculine domination, the man on top. Anything else was to be the other, a woman, to be feminized.

Anti-homosexual laws were specific; buggery = male rape. No man could admit to accepting or enjoying being the other. In fact if he did he must be killed, as was the case with Shakespeare's contemporary Marlowe. He too was accused of Satanism, as the author of Faustus, and for his atheism. And like King Edward II he got his just deserts.

This article describes some of the influences that religious and moral views
have had on our laws and society. It will also discuss how the gender and sexual
views of today mostly arise from our religious past. As a result of some of
these interpretations, not only females but non-traditional outcast groups, such
as homosexual, transsexual, and transgender individuals have been subject to
hundreds of years of prejudice and subsequent persecution.

And the equation of Satanism with homosexuality remains as the subtext of of fundamentalist discourse even today.

Our sodomite conspirators have demonstrated the sorcerer's mastery of deception by legitimizing the pervert "out" from the closet and with the other hand, closeting the truth.

In order to establish the link between abortion and sodomy one must understand the essence of sodomy. The term sodomy is a take off from the warped lust portrayed in Genesis 19:4-5

"Before they went to bed, all the townsmen of Sodom, both young and old--all the people to the last man--closed in on the house. They called to Lot and said to him, "Where are the men who came to your house tonight? Bring them out to us that we may have intimacies with them." "

As horrendous as abortion (the murder of the most innocent of all human beings) is, sodomy is the far graver sin. Acts of sodomy produce no eternal spirits that have the opportunity to enter Heaven. With abortion there is an eternal spirit –produced at the instant of conception– who will have the opportunity to choose between good and evil in non corporeal1 form and thus will be able to accept or reject eternal life.

Allah will not like looking at those who do sodomy

Posted by EUGENE PLAWIUK at 5:30 PM