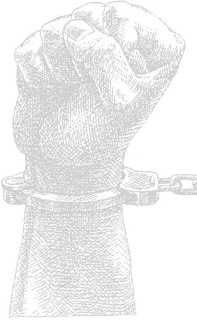 Atlantic Historian (history of the sea and colonization) Marcus Rediker, who authored the 'must read ' The Many Headed Hydra, has a new book out on Slave Ships since this is the 300th anniversary of the beginning of the end of Slavery.

For capitalism to expand, forced conscripted labour would be replaced with a new form of exploitation; wage slavery. Which itself was evolving from both indentured servitude and slavery during this period.

Rediker takes a libertarian socialist view of the Atlantic trade and its importance in the creation of global capitalism continuing the social/labour history tradition developed by E.P. Thompson in creating approachable and readable works.

Over more than three centuries, more than 12 million Africans were loaded on ships, bound for the Americas to be slaves.

Aboard the slaver, or Guineaman, as the vessels were also known, the kidnapped Africans frequently had to travel in living quarters as cramped as coffins, and suffered savage beatings, outright torture and death to quell uprisings and forced dancing to keep them fit.

While the plantation system and other aspects of slavery have been widely studied, the history of the slave ship itself is largely unknown, says historian Marcus Rediker, author of "The Slave Ship — A Human History."

"What I'm basically interested in is how captains, ship captains, officers, sailors and the slave interacted with the slave ship. What was the actual reality? Of course, it was quite horrifying," said Rediker, a University of Pittsburgh history professor. "In many respects, the development of the Americas through slavery and the plantation system is unthinkable without the slave ship."

For a couple hundred years, most people thought they knew what happened during the Atlantic crossing, Rediker says. Abolitionists had produced evidence of life aboard slave ships, but many scholars were suspicious of what they'd gathered, thinking it propaganda.

Perhaps the most significant reason for lack of scholarship, he says, is an assumption that "history happens on land, that the landed masses of the world are the real places and that the seas in between are a kind of void."

Marcus Rediker escapes the 'the violence of abstraction' in this history of slave ships that richly mines the extant writings of captains, sailors and slaves.

But, as promised, this account of life aboard the "vast machines" is not told with charts and tables. The slave ship, as a floating factory, prison and weapon, was recognized by all as a world-altering technology. Rediker's sources include parliamentary hearings, abolitionist pamphlets and the extant writings of captains, sailors and slaves. Chained below decks aboard what some imagined were "houses with wings," Africans were already, according to Rediker, forging new communities.

The slave ship ranged in size and design from 11-ton sloops, capable of carrying 30 slaves, to 566-ton behemoths, capable of carrying 700 to 800 slaves. Such variety belies the slow pace of innovation within the trade. In spite of its centrality to European ventures abroad, the great minds of the Enlightenment added to the slave ship -- over the course of 100 years -- copper-sheathed hulls (to protect against shipworm), ventilation and netting to catch those who tried to jump overboard. Liberté, égalité and fraternité came separately.

Much of Rediker's book also concerns the lives of sailors, the trade's "white slaves." Many were compelled to sea by debt, others by trickery. Half were cut down within months by West Africa's endemic parasites. Those who survived disease had to endure the cruelty of captains driven mad by profit. Some escaped, only to be caught and sold by African traders. Others became pirates. But all were lucky compared with the chronically ill, penniless sailors who, cheated of wages and their passage home, littered 18th-century ports from Kingston to Charleston.

Rediker looks not at that bigger picture but at the slave ship itself, as a microeconomy where the captain was chief executive, jailer, accountant, paymaster and disciplinarian, exercising these roles by maintaining, from his spacious captain's cabin in a very unspacious ship, the mystique of what later military leaders would call command isolation. Slave ships are, after all, a far larger part of our history than we like to think. Our normal picture of an 18th-century sailing vessel is of one filled with hopeful immigrants. But before 1807, ships carried well over three times as many enslaved Africans across the ocean to British colonies as they did Europeans.

Not only was the business a booming one, it was, until pesky abolitionists started making a fuss in the 1780s, considered highly respectable, as central to the Atlantic economy as is something like oil today. "What a glorious and advantageous trade this is," wrote James Houston, who worked for a firm of 18th-century slave merchants. "It is the hinge on which all the trade of this globe moves." John Newton, who later wrote the hymn "Amazing Grace," spent part of his youth as a slave-ship captain and believed that because of the long periods of time at sea, there was no calling that afforded "greater advantages to an awakened mind, for promoting the life of God in the soul."

The typical slave ship began its life as a merchant vessel, and was refitted later for its grim purpose.

The primary remodeling, which often occurred on the outward leg of the voyage, was to build walls below decks to separate men and women, and then build horizontal platforms halfway between the first and second decks on which to stack the slaves.

The height between the first and second deck usually was only about 5 feet before the remodeling, said Marcus Rediker, University of Pittsburgh history professor and author of "The Slave Ship: A Human History." Once the platforms were built, headroom was about 21/2 feet.

"This produced crowding of a kind that is almost incomprehensible," he said. "One of the things that struck almost everybody about a slave ship was the stench of it.

"It was said in Charleston, S.C., that when the wind was blowing off the water a certain way you could smell a slave ship before you could see it. It was a function of sickness, vomit, diarrhea, death and also the way the human body perspires in the condition of fear."

And while it is true that some slave ship seamen joined the crew because they were sadistic or wanted sexual access to African women, many of them were victimized almost as badly as the slaves, Dr. Rediker said.

He discovered that in many cases, ship captains would get sailors to run up debts in taverns, and then would pay off the tavern owners with some of the sailor's advance wages in return for the sailor being handed over to work on the crew.

Slave ship captains also would offer sailors advance wages worth $800 to $1,200 in today's money or to pay part of the sailors' salaries to their wives once a week.

Once they were onboard, many crewmen were treated almost as brutally as the slaves. For a huge variety of infractions, they were whipped, chained, denied food, stabbed and even shot.

In fact, the death rate among slave ship crews was almost as high as among the slaves, Dr. Rediker said, and hit 5 percent even on the healthiest of voyages.

The slave trade was required to create vast accumulations of capital. And it is directly tide to British expansion and so called Free Trade.

People in Norfolk are about to have their eyes opened to the county's role in the transatlantic slave trade.

If you think of the trade in enslaved Africans using British ships, Liverpool, Bristol and London spring to mind. But project historian Richard Maguire is about to shock Norfolk people with the deep links he has unearthed concerning the role the county played in the trade - and its abolition.

His research culminates in an exhibition at the Norfolk Record Office at County Hall from Monday.

He said: “The original idea was to look at something that was never looked at before - Norfolk's connections to transatlantic slavery.

“People have always tended to assume that the slave trade was exclusive to Liverpool, Bristol and London. But research we have done at the Record Office has revealed there to be a goldmine of information relating to Norfolk. Norfolk was connected at all levels of the trade - slave ships left King's Lynn for Africa, county people owned slaves and invested in plantations and traded slaves from here. But on the other hand Norfolk people from the 1780s onwards were equally involved in calling for the end of the slave trade.

“We are trying to give people an understanding of part of the history that nobody knew about before.”

The exhibition also reveals black people have lived in Norfolk since the 17th century. Documents on show reveal that a black man lived in King's Lynn in 1673, a black woman Rachel was baptised in Diss in 1799, and Elizabeth Buxton, from Stradsett, left £10 to her black servant in her will of 1729. Other documents reveal the inhumane treatment slaves received from owners, and a list of the enslaved people on the Hanson Plantation, Barbados, owned by Sir John Berney of Kirby Bedon Hall, lists black people as stock alongside cattle.

And in a related story a freedom ship may be at the bottom of Lake Michigan.

A fantastic story is unfolding along the Lake Michigan shoreline in Indiana.

It involves a 150 year old shipwreck, a Porter County Historian, fugitive slaves and The Underground Railroad.

Legend has it a wooden schooner would stop on the shore in Indiana to pick up fugitive slaves and take them to Chicago where they would hide on ships bound for freedom in Canada.

After the 1850 Compromise was passed it became dangerous to help escaped slaves even in free states like Illinois and Indiana.

According to the law you could be prosecuted, fined and even thrown in jail. The mysterious ship met with a tragic fate.

Now a team of researchers is racing against time and the elements to solve this mystery and prove this was the legendary ship used to smuggle fugitive slaves to freedom.

Again the idea of piracy and privateers arising from the Atlantic Slave trade to become the basis of capitalism in the new world plays an important role later in the industrial revolution created by the American Civil war.

Just as it is important today in the creation of what Phillip Bobbitt calls the New Market State. Which we see in the rise of gang (pirate) controlled countries like Somalia and Jamaica.

Piracy was the origin of capitalism as it evolved within the declining feudal economies of Europe.

Jamestown; the beginning of Globalization

Jamestown; The Birth of Capitalism