I Agree With The IMF 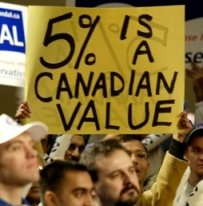 No really I do. So do most economists and anyone rational enough to understand that the GST cut was a political ploy. Of course for the Tories rational economics is a contradiction. Since all they care about is power. To bad there isn't a rational economist in the PMO.

The International Monetary Fund has suggested the federal government would be better off cutting personal income taxes and lowering taxes on savings than cutting the GST. In its annual report reviewing the Canadian economy, the IMF said a cut in income taxes instead of consumption taxes would be "more likely to stimulate labour supply, as well as saving and investment, than a lowering the GST rate."

The Committee of Tunnel-Visioned Progressives hereby excommunicates you on the basis of a headline to an article we didn't bother reading the content of.