Conservative blogger and a founding member of the Blogging Tories, Stephen Taylor has called a spade a spade, he says of the Harpocrite Regime in Ottawa ; the evolving tradition of the Conservative Party's consultatively autarchic approach to PMO power.

For those of you that don't know here is the definition of autarchic.

From Wikipedia, the free encyclopedia

Autarchy, in American English can refer either to a form of self-government, or to the absolute rule of an individual. The word comes from the Greek autarkhos (απολυταρχία), "auto" meaning self and "arkhos" meaning "ruler".

In its self-government meaning, autarchy refers to a libertarian idea, championed by Robert LeFevre, of stateless self-governance, distinct from anarchism (a system which many associate, rightly or wrongly, with violence).

However, in British English Autarchy is the same as the American equivalent, Autarky, meaning a national economic policy that aims at achieving self-sufficiency and eliminating the need for imports (by imposing tariffs, for example). Such a goal may be difficult, if not impossible, for a small country. Countries that take protectionist measures and try to prevent free trade are sometimes described as autarchical.

And there is nothing conslutative about it, unless you mean that the Supreme Leader 'lets' people give him opinions which he may or may not listen to.

Which is what Temp PM Stephen Harpocrite has been doing. So the New PMO is no different than the Chretien one; whom Jeffery Simpson called the "Friendly Dictator" .

Like all autarch's the Harper has already purged his office of those who disagree with his bunker mentality. Harper fires spokesperson after early PR stumbles

William Stairs, the Prime Minister's director of communications, left Mr. Harper's office after what sources said were problems putting out the fire over Mr. Emerson's decision to leave the Liberals and join the Conservative Party.

The sources said Mr. Stairs departed after arguing 10 days ago that the PMO and the Prime Minister needed to deal more forcefully with the Emerson problem. The Prime Minister had kept mostly silent on the difficulties surrounding Mr. Emerson despite the urgings of Mr. Stairs and a number of other individuals within the government.

Mr. Stairs had been assigned the communications job after doing similar duties during the successful election campaign. But sources said the veteran Hill staffer, who had previously worked for Progressive Conservatives in the Senate and has been a long-time PC, ran into similar difficulties as those experienced by his predecessors. Mr. Stairs's departure makes him the third communications director to leave the job within the past 18 months or so, after James Armour and Geoff Norquay.

Now I hope that clears everything up and makes you all feel better, as I have said before this is Alberta Politics on the national stage.

The only difference between these two autarch's is the moustache. And notice how all autachs use the finger. 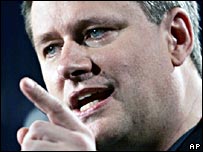 And for those of you who think that I am being harsh in comparing these two, just remember that in Russia Stalin is considered the hero of the Conservatives in that country. Those who support a strong state, family values, etc. etc.

This month is the Fiftieth Anniversary of Krushcheva's release of the Secret Testimony on Stalin that shook the CPC USSR to its foundation and laid the basis for its slow death which ended in that autarchies final burial in 1989.

It was only later, when I got older, that I learned about the "secret speech" my great-grandfather gave 50 years ago this week, in which he denounced the crimes committed by Stalin and the "cult of personality" that developed around him. The story of the speech is not a straightforward tale of good versus bad, of a benevolent, democratic leader replacing a tyrant. It is far more nuanced than that. Khrushchev, after all, had been one of Stalin's trusted lieutenants, who by his own admission "did what others did" — participating in the purges and repressions of the 1930s and 1940s, convinced that the total "annihilation of the enemy" had to be a communist's uppermost priority in order to ensure the shining future of international communism.

The most liberating events — Khrushchev's de-Stalinization campaign of 1956, or Boris Yeltsin's privatization of 1991 — generally end up in disillusion or disarray, suggesting that Russian society is never fast enough to digest modernization or patient enough to see the liberal changes through.

Instead, Russians look back fondly on their great victories and parades and, eventually, after short periods of thaw or perestroika, find themselves wanting their "strong" rulers back — the rulers who by inspiring fear provide a sense of orderly life, whose "firm hand" is associated with stability. Stalin's order was unbreakable while he lived; Vladimir Putin now promises a new order in the form of his "dictatorship of law."

Why Russia Still Loves Stalin
By Nina L. Khrushcheva
This is why the country rallies behind President Vladimir Putin. Putin promotes himself as a new Russian "democrat." Indeed, Russians view him less like the godlike "father of all nations" that Stalin was, and more like a Russian everyman -- a sign of at least partial democratization. Putin often notes that Russia is developing "its own brand of democracy." Translation: His modern autocracy has discovered that it no longer needs mass purges like Stalin's to protect itself from the people. Dislike of freedom makes us his eager backers. How readily we have come to admire his firm hand: Rather than holding him responsible for the horrors of Chechnya, we agree with his "democratic" appointment of leaders for that ill-fated land. We cheer his "unmasking of Western spies," support his jailing of "dishonest" oligarchs and his promotion of a "dictatorship of order" rather than a government of transparent laws.

Soviet society was never entirely monolithic. The proof of this can be found in the novels of Alexander Solzhenitsyn as well as in the Soviet archives. There was, however, a strong sense of a common fate and a common cause that united not just the working class and the bureaucratic elite, but even gulag inmates and their captors. The Stalinist regime was directly linked to the history of the Revolution. It was a sort of communist Bonapartism. It combined totalitarianism with democratic principles, fear and repression with enthusiasm and sincerity. This blend made the 20th Party Congress possible.

Outrage at revision of Stalin's legacy
After a number of delays, the "Stalin Museum" dedicated to the once-venerated Father of the People is due to be opened at the end of March in Volgograd, the World War II "hero city" once known as Stalingrad.

The project is being privately financed by local businessmen but will controversially enjoy pride of place in the official complex that commemorates the epic Battle of Stalingrad.

The museum will boast a writing set owned by the dictator, copies of his historic musings, a mock-up of his Kremlin office, a Madame Tussauds-style wax representation of him and medals, photographs and busts.

"In France people regard Napoleon and indeed the rest of their history with respect. We need to look at our history in the same way."

Eugene, the PMO is inherently autarchic.

Harper's the guy who now sits in that office.

What I was trying to convey was that Harper is bringing a consultative element to an otherwise constitutionally autarchic office.

Harper should be given credit for trying to add flexibility to the autarchic framework of the PMO.

See my latest posting on King Stephen I Democracy is Messy, on how consultative Harper isn't. Nice try though. Harper is Ralph Klein in Ottawa. And though you attempt to apologize for him he is currently acting on HIS OWN not representing his party. Which was always his problem, he sees his role as Presidential not as a party leader, representing a party in pariliment. It will make your yern for the good old days of Martin and Chretien who made the office of the PM look positively liberal compared to what Harper is about to do with it.