A Birthday Present For Che

And lets not forget that other great Cuban Revolutionary who would have turned 78 yesterday. The guy who ran the bank of Cuba because when they were handing out jobs around the table, they asked whose an 'economist', and he said I am. Only to find out later he thought they said 'communist.'

Bolivia was where Che began his understanding of the oppression of the indigenous peoples of Latin American, and where he would die helping the Coca farmers. 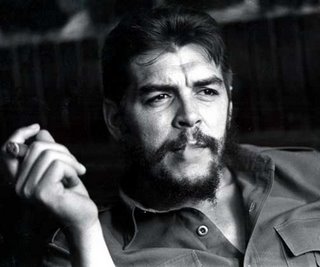 LA HIGUERA, Bolivia (Reuters) - Bolivian President Evo Morales pledged solidarity with Cuba and Venezuela on Wednesday as he paid homage to Ernesto "Che" Guevara at the spot where the legendary leftist guerrilla was killed in 1967.

Morales, who has hung a large portrait of Guevara in the presidential palace, defended his leftist alliance with Cuba and Venezuela and said he would be willing to take up arms to defend them in the face of any U.S. attack.

"If they did it in Cuba, in Venezuela or Bolivia, we'd be willing to take them on with arms to defend the nation, natural resources and social reforms," Morales said.

"Ten years ago, I said there'd soon be many Cubas in Latin America and I now feel I was right ... . Now we've got another commander, our comrade (Venezuelan President) Hugo Chavez. We've got two freedom-fighting commanders ... whatever the empire says," added Morales, who often dubs Washington "the North American empire."

He is the first Bolivian president to pay homage to Guevara in the mountainous area where the Argentine-born medical doctor was captured and shot to death by Bolivian soldiers as he sought to spread communism to Bolivia.

Guevara was Fidel Castro's lieutenant in the 1959 Cuban Revolution. His attempt to spark another movement in Bolivia in 1967 was stopped after seven months of fighting in the subtropics.

He was captured on October 8 and taken to the school building in La Higuera, where he was executed the next day at the age of 39.

Che was executed by the CIA and Bolivian Army in the first act of the phoney War On Drugs that began way back then.


La Paz, Jun 15 (Prensa Latina) The government and people´s tribute to the 78th anniversary of Argentine-Cuban guerrilla commander Ernesto Che Guevara, shared by ambassadors from Cuba and Venezuela, has caused a great impact in Bolivia.

President Evo Morales, and Cuban and Venezuelan Ambassadors Rafael Dausa and Julio Montes ratified their nations´ will to emulate Che´s solidarity fight as the greatest homage to his memory.

History has done justice to the guerrilla fighter, in an emotive revolutionary activity at the La Higuera village, where he was assassinated in 1967.

In his address, Evo Morales described Che as an immortal leader who tirelessly fought against US imperialism and for the liberty and dignity of Latin America, "dying for us, equality and justice."

"When I was a farmers´ leader ten years ago, I was asked about my views on Cuba, and I answered there would be many 'Cubas' in Latin America. I am very satisfied I was right," he noted.

Morales referred to unconditional solidarity among Cuba, Venezuela and Bolivia, calling it the axis of humankind, of the poor who fight for life, as proven in health and education collaboration, and pledged he would never betray Che´s ideals.

Thirty years ago Che's Revolution in Bolivia planted the seeds for the revolutionary movement of Evo Morales and MAS.

''Bolivia's Evo Morales Launches His Movement Toward Socialism ...
Unlike the traditional populist leaders in the Andean region, who originate in the middle and upper classes and who implement redistributionist measures from above without coherent ideological grounding and grassroots organization, Morales comes from a poor indigenous background and heads an organized mass movement with ideological foundations and programmatic applications of them. His Movement Toward Socialism (M.A.S.) -- Bolivia's largest political party -- brings together indigenous, community, peasant, labor and student groups in a coalition that, despite the many tensions within it, seeks to replace permanently the oligarchic rule of the European and affluent mestizo middle and upper classes that have become linked to and dependent upon multinational corporations and the states that protect them, particularly the United States. [See: "Bolivia's Evo Morales Shifts the Hemispheric Balance of Power"]

The aim of the M.A.S. is not simply to take over the existing system and run it by keeping it intact, but to change it fundamentally. The extent of the transformation that the M.A.S. envisions became evident in June when it released its program, "Refounding Bolivia," which incorporates its agenda for the forthcoming constituent assembly.

At the highest level of ideological abstraction, the document interprets Bolivian history as "indigenous-popular resistance to discrimination and poverty," proclaiming the "rights" of indigenous peoples to self-determination, control over their territories and "collective resources," and use of their traditional political and justice systems, consistent with respect for human rights. The M.A.S.' vision for Bolivia is a "plural, participative, communitarian and representative democracy, based on diversity of peoples, for the elimination of all forms of colonialism, segregation and discrimination." In the economic sphere, "Refounding Bolivia" declares that natural resources are "social property" and that their management falls to the state -- a model of "social economy" with room for private productive property so long as it serves socially useful purposes.

In a shift from previous administrations that have backed free-market style reforms, Morales is favoring a strong state role in the economy. Shunning a free-trade agreement with Washington, he has signed a pact with his left-wing allies Cuba and Venezuela.

A draft of the Morales plan obtained by the Associated Press says the government plans heavy public investment that could reach US$1.6 billion (euro1.3 billion) by 2011 that it hopes will spur annual economic growth of 7.6 percent _ more than double Bolivia's current growth rate.

The Left In Latin America

Nothing To Worry About In Bolivia

A Libertarian Defense of the Left Wing in Latin America