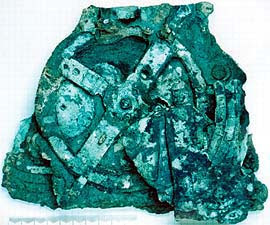 The New York Times is reporting this amazing discovery, which pre-dates the first modern computers of the Ninteenth Century by thousands of years.

A century ago, pieces of a strange mechanism with bronze gears and dials were recovered from an ancient shipwreck off the coast of Greece. Historians of science concluded that this was an instrument that calculated and illustrated astronomical information, particularly phases of the Moon and planetary motions, in the second century B.C.

The Antikythera Mechanism, sometimes called the world’s first computer, has now been examined with the latest in high-resolution imaging systems and three-dimensional X-ray tomography. A team of British, Greek and American researchers was able to decipher many inscriptions and reconstruct the gear functions, revealing, they said, “an unexpected degree of technical sophistication for the period.”

Historians of technology think the instrument is technically more complex than any known device for at least a millennium afterward.

The mechanism, presumably used in preparing calendars for seasons of planting and harvesting and fixing religious festivals, had at least 30, possibly 37, hand-cut bronze gear-wheels, the researchers reported. An ingenious pin-and-slot device connecting two gear-wheels induced variations in the representation of lunar motions according to the Hipparchos model of the Moon’s elliptical orbit around Earth.

The Ancient Greeks also had steam power that they used to make toys with and other technological advancements so here is the question historians ponder;
Why No Industrial Revolution in Ancient Greece?

Ancient civilizations were quiet advanced as antiquarians have known for hundred of years, hence the Atlantis Myth as a meme of this. And no we did not need aliens to help us with out technological development.

Rather ancient civilizations may have had a religious reason for not advancing technology. Being pagan civilizations they would have a different world view , that of magick ,than the the later Christian civilizations that would bring forth modern capitalism, science and the industrial revolution.

Despite their hierarchical social structures, ancient civilizations were based on use value rather than exchange value. The latter came into existence with the transition from the middle ages to the Rennisance.Modern capitalism and the industrial revolution in technology is the result of the change from use to exchange value.

It is also a change in world view, from one that sees science as a way to know god, gnosis, to one that has 'faith'. Thus by the end of the Rennisance a materialist science devoid of religious morality was begining to come into existence as the Rennisance humanitarians rediscovered gnosis and Hellenistic philosophy that truimphed in the Enlightenment.The decline of the Catholic church gave rise to civil society and a greater openess to ideas including science and technology.

The development of Protestantism allowed for a more flexible Christianity able to adapt to the technology of the industrial revolution and the advent of captialism. A Christianity of towns folk and merchants rather than of priests and peasants which had been the power of the Holy Roman Empire and its Church State. The creation of a non-Catholic Church in England, gave rise to protestantism and puritanism which embraced technology as it transformed its agriculutral economy into a capitalist one.

Even relatively more recent civilizations have been amazing scientists with their technology such as the recent discovery of nano-tech used in the creation of the Damascus steel.