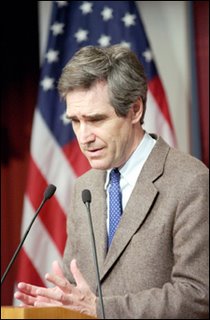 Gee Canada could get kinda drafty under Iggy's leadership. This gives new meaning to Iggy nation.

Liberal leadership front-runner Michael Ignatieff says he'd like to see young Canadians heading overseas, bringing Canadian values to some of the world's hot spots including Afghanistan and Zimbabwe. "This is a generation that can lead the world," he said at the leadership convention Thursday. "I want to be the leader who got this generation out to Zimbabwe, to Afghanistan, to the places where Canada can make a difference."

He must have been talking to his Democratic buddy Charlie Rangel.

Posted by EUGENE PLAWIUK at 6:06 PM

HOw colonial could you get? Next Iggy will be wondering out loud why 'they hate us so much'!

signed,
not an ignatieff supporter, thats for sure.

Now this is a psy ops campaign worth writing home about.

I guess you forgot to read the paragraph right under:
"Although Ignatieff's camp was quick to clarify he does not intend young Canadians to go to the war-torn country as soldiers, Ignatieff did tell young Liberals he supports what he called a "good Canadian mission" in Afghanistan."

Its called editing. I quoted Iggy. Iggy's camp made the clarifciation not Iggy himself. Another foot in mouth Iggyism. Point is he said sending Canadian youth into 'hot spots', with no clarification of what that meant. Had he meant as a Peace Corps he would have said it, after all the man is an intellectual giant.

"after all the man is an intellectual giant"

I assume you were being sarcastic because from my perspective Iggy looks like a midget, but to say so would be insulting to the many midgets who tower above this man.

Eugene - you are a really grasping at moonbat straws here. Nice misleading headline. Nowhere does he do anything of the sort, but feel free to delude yourself further, if that is possible.

"It's called editing" - whatever guy. You're a loon.

He was talking about young people volunteering to go overseas and provide aid through things like building roads and school houses... do you believe what you write here or just hope others will believe it?