Is Delphi the Oracle of things to come? 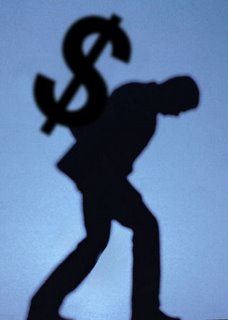 Delphi not only halts production, breaks its union contract and lays-off workers, but it also bails on its underfunded pension liabilities. Awash in money GM seperated out Delphi for exactly those liablities. Now they come back to bite both companies in the ass. And they come back and hits workers twice as hard, first as workers losing their pension benefits and then as taxpayers asked to pay for the company outsanding debt on those benefits.

The pension funds themselves? Well those not locked into payments become a source of liquid capital for Delphi in bankruptcy.

Pensions will also be replaced with defined-contribution plans for hourly employees who are more than seven years from retirement and not covered by the GM benefit guarantee and salaried workers. The company said it will also need to obtain relief from the U.S. Pension Benefit Guaranty Corp., Internal Revenue Service, and Department of Labor in order to amortize funding contributions over a longer period than may have previously occurred. Congressional action may also be necessary, Delphi said.

Proving once again that labour is the source of all capital, Delphi is stripping itself of its 'costs' that is variable labour; workers and commodities and holding on to its fixed assets as assurance.