The Right Whing Blogger Joe Fetus, who claims to be a woman (sic) likes to call the Canadian Status of Women, SOW. Get it. Then she/he complains that I am a left wing Chavuinist, whatever that is.

But somewhere along the way, to be a feminist meant to adopt the belief in legalized abortion, acceptance of homosexual behaviour, moral relativism, political correctness, androgyny and so forth.

She/he complains about androgeny and yet posts as Joe Fetus, hmm someone here is confused.

On many points, most so-con women and feminists agree. Once upon a time, many so-con women of today would have been the feminists of yesteryear.
Let me dispel some of the myths. Many of us are college-educated. Many of us have jobs outside the home-- sometimes full-time, sometimes part-time, sometimes with a stay-at-home husband, and sometimes not. Most of us prefer to stay home, because we believe that no one can be a full-time substitute for mom.

Which of course Joe or Jane Fetus failed to read my linked post. In my post on Whose Family Values I deal with this in depth.


The Feminists of yesteryear she/he refers to were social reformers, middle class women who had maids and servants they bossed around. In having free time, these bourgoise women made social reform their concern. In particular they focused on ending the saloon bar culture of the working class, blaming alcohol for the violence women faced in the home. Of course the long hours of work and poverty experienced by the working class was not the source of family violence, it was alcohol.

Such middle class temprance movements then expanded to attacking working class women forced into the sex trade. Such so called feminists are with us today as Social Conservatives (Joe/Jane Fteus calls them So-Cons) and they again take the moral high ground when denouncing pornography, prostitution, etc. Not looking at the source of that exploitation which is capitalism.


As for having the 'choice' to work or not work, let me repeat what I said in Whose Family Values

Like the middle-class women of the 19th century, who had time to raise her family thanks to nannies and servants, today that same professional class returns to the bosom of the nuclear family, as stay at home moms. Only because they and their husbands are professionals earning incomes that can support both of them. and of course can afford the indentured servitude of a live in nanny.

It is they who promote the ideal of the family values of the stay at home mom, and call for tax credits for this voluntary bourgeois vocation. Of course these same stay at home moms of the professional classes also have maids, and nannies (indentured servants from the Philippines instead of Ireland). They see little need for socialized daycare, or for a living wage for the proletarian family whether it be a single mother family, a heterosexual or lesbian family. And like their moralist predecessors they couch their version of the bourgeois nuclear family in terms of Christian family values.

The fact is simple, that in previous centuries and in many cultures other than that of the WASP middle class in North America, child rearing is a collective process, involving the extended family. And it still is today in many cultures.
Grandparents, aunts, uncles, cousins, brothers and sisters, all raise the family children.

Of course in atomized capitalist culture, where private property has dominated the social relationships destroying the communal and replacing it with the nuclear family (the source of all psycho-social disfunction) of bourgoise individualsim, the ideal is the myth of the stay at home mother.

Such mothers, only stay at home long enough till the child is two years old. Sometimes even less time. Working class families cannot afford the nannies of the middle class, nor can single mothers afford the insanity of living in isolation unable to socialize with others because of her imprisonment at home with her child. The drugging of women in the Sixties in order to deal with this isolation and depression, now called post-partum depression, created a Valium culture.

It was this very isolation of women that led to the rise of genuine feminist groups,
the conciousness raising, where women met and shared their stories of oppression.

Women are not individuals anymore than I am as a Man. Our gender roles are socially constructed. It is when we express ourselves as individuals, and break out of these roles that we become authentic human beings. All other forms of so called individualism are that of the consumer in capitalist culture, they are not authentic individualism, they are about consumer choices, not liberation.

Social Conservatives female or male do not want liberation, they want the status quo at best, at worst a return to some mythic 1950's America. 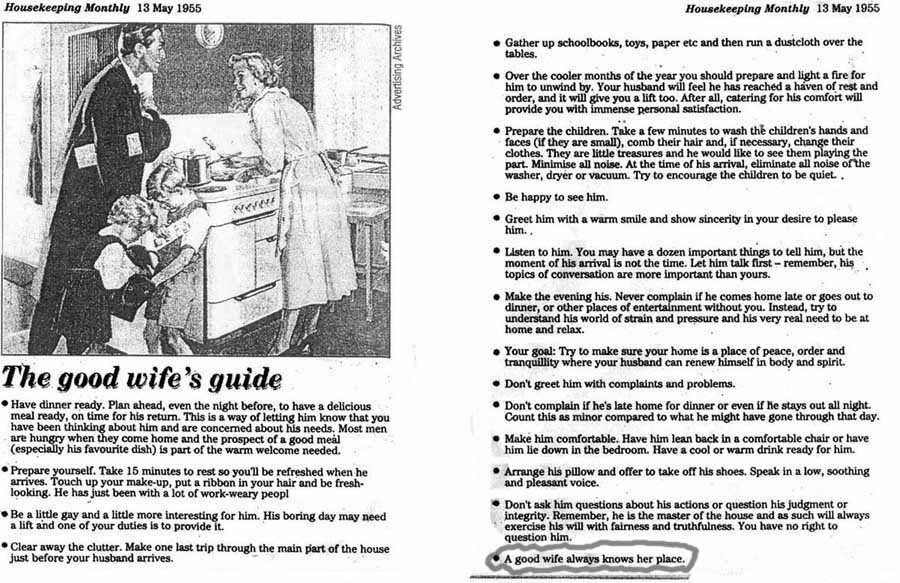