Thanks to efforts of environmentalists and Bill Bonko the Liberal MLA, who acted on my suggestion that environmentalists buy Grizzly Hunt lottery licenses and not use them to protest the hunt, the annual Alberta sport hunt (massacre) of Grizzlies was ended. But Grizzlies are still endangered. There are now only 345-500 of them left in the province.

Unfortunately the department in charge of declaring them an endangered species is run by the Great white-hunter reactionary Ted Morton.

Alberta wants kids to get hunting

Declaration of protected spaces is not on his agenda either as he promotes sustainable resource development, which means more intrusion and encroachment into Grizzly habitat for industrial development.

Alberta suspended the annual spring grizzly hunt for three years in 2006 when initial numbers suggested the population was well below the 1,000 bears that had previously been estimated.

But grizzlies are still dying from what biologists term "human-caused mortality." They say that must be addressed soon if grizzlies are to survive.

Most grizzlies are shot in self-defence, or are mistaken for black bears. Some are killed legally by aboriginal hunters, others are shot by poachers or thrill-killers.

Some die in highway or railway accidents. Some are destroyed when they become nuisance bears and pose a threat to public safety by barging into people's yards to feast on everything from garbage and grain to apples and pet food.

The national parks aren't safe havens for grizzlies, either. More than 50 have died in Banff, Yoho, Kootenay and Jasper since 1990, mostly in highway and railway accidents or because they posed a threat.

Many Albertans believe that if Alberta loses its grizzlies, it loses the wilderness. The grizzly is seen as an icon of the wild, but more importantly, it is an umbrella species. If its space is protected, other plants and animals will have space to thrive as well.

Officially, grizzlies are considered "a species that may be at risk."

But the Alberta Endangered Species Conservation Committee recommended in 2002 that grizzlies should be designated a "threatened" species under the provincial Wildlife Act. That was based on estimates that there were only 1,000 grizzly bears left in Alberta.

The government has yet to move on that recommendation despite recent surveys that now suggest the number could be less than half that.

Alberta Sustainable Resource Development established a 15-member Grizzly Bear Recovery Team to study the issue and draft a strategy to ensure grizzlies aren't wiped out, as they have been in neighbouring Saskatchewan and jurisdictions further east.

The team presented its report and recommendations in 2005. Sustainable Resource Development Minister Ted Morton is expected to announce his department's response to the plan in the near future. Critics say implementing the plan is long overdue.

Grizzlies live in a narrow band along the province's western boundary, primarily between Highway 16 and Highway 3.

Recent DNA testing has produced estimates that there are about 180 bears in that area, outside the mountain parks, and about 160 bears inside the parks, for a total of about 340 grizzlies. Counts of bears south of Highway 3 and north of Highway 16 haven't been completed, but those areas are not expected to yield high numbers.

"We've been far too casual about the shootings and the deaths of bears," laments Jim Pissot of Defenders of Wildlife Canada. "Now that we're aware that there are far fewer than 500, the onus is on the minister to take immediate steps to protect habitat and bears."

Bear biologists say roads are the biggest factor in grizzly deaths. Most human-caused deaths occur within 500 metres of a road.

As a Republican from California I am sure Mr. Morton would appreciate the Alberta revision of the American second amendment; 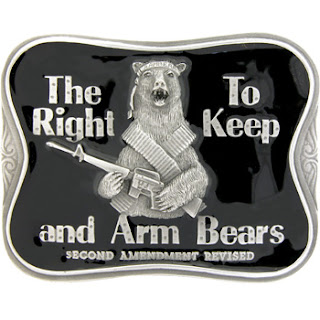