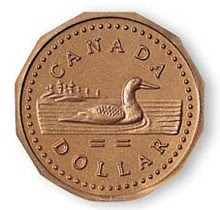 Like their Green Policy the Conservative Government likes to blame the victims. In this case Finance Minister Jim (Halloween Surprise) Flaherty takes a shot at Canadian consumers and retailers. He wants retailers to reduce their prices based on the strength of the Canadian dollar.

The Canadian government plans to try to persuade retailers to cut prices more quickly as the Canadian dollar rises "Cross-border shopping quite frankly is not good for retailers in Canada, nor is good for tax revenues for the governments in Canada," Flaherty said.

And instead of intervening in the market he asks us as consumers to do his job for him.

He is posturing of course, and like his asking banks to reduce ATM fee's he is blustering and blathering knowing that it is all for naught expect to appear to be doing something.

Now if he really wants to do something he would get together with Foreign Affairs, call in the U.S. Ambassador and put pressure on American exporters to drop their prices. But of course considering that this government is willing to sell out Canadian industry, the softwood lumber agreement comes to mind, for better political relations with their Republican cousins in the White House, well that would be a bit much to expect wouldn't it.

Diane Brisebois, Retail Council of Canada president, said the true culprit behind high prices is not the retailers but the suppliers of big recognizable national brands. She said she hopes she can set Mr. Flaherty - and Canadians - straight about why prices in Canada are generally higher than those in the United States. Suppliers of national or global brands charge Canadian retailers 20 to 50 per cent more than they charge a U.S. retailer for the same item, she said.

Canadian Banks and The Great Depression

Forward To The Past

Tax Cuts For The Rich Burden You and Me

And the nonsense that both the Cons and Libs are spewing about how "the Loonie only reached parity a month ago, so don't expect to see price decreases for several months" is such a line of BS.

The loonie has been strengthening for 5 years, and especially over the last 6 months. Even if there is a lag in the "cause and effect" as the corporate and government liars what to claim, then we should have seen some kind of effect by now.

And the media is once again doing it's "job" of ignoring the most obvious of "official lies" and pretending that complete bull crap spewed from the mouths of lying corporate economists, and their bought and paid for politicians should be reported without even the most basic questioning of the obvious incongruities.

A pox on them all.